Children love films. They ensure variety and entertainment in lessons – and support the learning process. What should teachers look out for when they use them in lessons? Here are some tips and practical examples.

Children do not acquire their native language and second languages as effortlessly and fast as many people assume. It is a long-winded process that requires carefully-chosen input with regard to educational methods and approaches. To achieve this, early foreign language teaching must provide learning opportunities that take every developmental area into account – linguistic, social, emotional, cognitive and motor. These days, children are influenced by the media at an ever younger age, as well as being highly visually oriented; “not only do they want to listen and speak, they also want to see what they have heard” (Rück 2004: 204). Films in early foreign language lessons are highly suitable for this.

There is something magical about new media to children. For instance a film and its follow-on activities can help to break routines. The young learners are motivated: interest and enthusiasm for the new language and the culture of the target language can be aroused (again). The film itself and the varied activities counteract rapidly declining concentration. 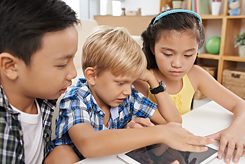 Films ensure variety and entertainment in lessons. | © DragonImages – Fotolia.com Film content contributes a great deal to the learning process in a cognitive capacity: children are exposed to exciting and interesting themes, socio-cultural material is communicated and new vocabulary is introduced or consolidated. When we assimilate films, different senses are addressed at the same time. Low-achieving children benefit particularly from this: it is the link between image and sound that makes the formation of meaning easier. Vocabulary can frequently be derived from the context, which makes resorting to the native language redundant.

Children can also make their own films. They draw pictures to go with vocabulary, and make up little stories that they can film with a mobile phone. In this way they gain their first experiences of producing short films of their own, which can be posted online using YouTube, for instance.

Information on the Use of Films

A film is certainly not an end in itself: the aim is to support the learning process, provide fun and enrich learning (cf. Widlok 2014:45). Watching together is intended to stimulate them to engage with the language and provide impulses for subsequent practical language learning. For this reason, the films must not overstretch the students, in either a language or cognitive capacity. And: the teacher must be familiar with the film content and if necessary use appropriate techniques to elucidate the content.

The follow-on tasks and exercises should include something for all children and learning types: non-verbal activities such as illustration of a scene, picture dictation or mime, but also language tasks such as guessing words or forming associations. Simple roleplaying exercises are ideal for children who particularly enjoy speaking, in which they use what they have just learnt in a communicative language context. For this activity, the content must be relevant for the children as well as dovetailing closely with their own world of experience. Simple material that is familiar from everyday situations encourages the junior learners’ enthusiasm for language.

And it’s true to say that less is generally more. It should be remembered that the concentration span in this age group is very short. Even a three to five-minute film with follow-on exercises that provide an opportunity for creative hands-on activity with a playful approach can have a big impact on the foreign language learning process.

The Goethe-Institut has picked a selection of short films from the popular show “Die Sendung mit dem Elefanten”. There are plenty of cartoons and nature documentaries aimed at language levels A1 to B1 on three DVDs altogether. The films are particularly suitable for early foreign language teaching at primary level.

Three short films from “Die Sendung mit dem Elefanten” about the letters B, D and F are available here to download. Look at the example of morpheme D for ideas on how to use the film in your lessons. You will also find examples of follow-on exercises. For the other two you can get the students to produce films of their own. Have fun!

Dr. Luiza Ciepielewska-Kaczmarek is a research assistant at the Institute of Applied Linguistics, a part of the Adam-Mickiewicz University in Poznań (Poland). Her research interest is DaF teaching methods and approaches in the early years.