Film screening and discussion of the film "Music in a different way".

Premiere of the film and online discussion with project partners and audience in Nuremberg and Glasgow, accompanied by German and British sign language.

In the film, musical performances of the Royal Scottish National Orchestra (RSNO) are juxtaposed with the repertoire of the St. Egidien Sign Choir, while at the same time addressing the translatability of audible pieces of music through sign language interpretation.

The project was originally planned as a contribution to Beethoven's 250th birthday celebrations in 2020. However, the visit of the sign choir to Glasgow and the concert with a hearing ensemble could not be realised due to the pandemic.

In collaboration with the RSNO, new and highly dynamic approaches to an alternative realisation finally emerged.

The event will be translated into sign language in two directions. The film is subtitled in English, with some speech accompanied by BSL.

Following the film screening, there will be an exchange with the audience and members of the Nuremberg Sign Choir and the Deaf Community in Glasgow.

Music with a difference is the joint project of the twin cities of Nuremberg and Glasgow, the St. Egidien Sign Choir from Nuremberg, the RSNO and the Goethe-Institut Glasgow.

Please register for the event on Eventbrite. 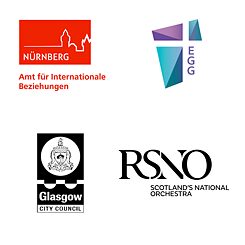