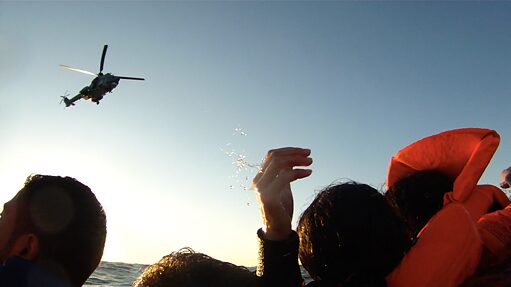 Affordable digital screenings will be available across the UK, special events live-streaming worldwide, and an expansive industry programme that will be available free internationally. The festival will celebrate the art of non-fiction through 48 new films, 10 cross-media projects, and 3 audio documentaries, featuring new films from 28 different countries. Of the directors presenting new work in the film programme, 54% are women or non-binary filmmakers.

We are pleased to partner up with the festival in presenting Purple Sea by Amel Alzakout and Khaled Abdulwahed. A Q&A with the directors will be part of the screening.

When the boat on which she was crossing to the Mediterranean  capsized off the coast of Lesbos, Syrian artist Amel Alzakout recorded the events using a waterproof camera strapped to her wrist. Co-directed with filmmaker Khaled Abdulwahed, Purple Sea is assembled from the extraordinary images captured during the period she and the other passengers spent trapped in the water. Adrift on the open sea, time seems to stand still as—beyond the chaos and a chorus of cries—a terrible calm descends. Alzakout poignantly narrates her perilous journey, and her poetic commentary feeds into a confrontational psychological reflection on this moment of personal crisis and collective tragedy.

Please be advised that a film within this programme contains images of real dead bodies which some viewers may find distressing.

Amel Alzakout, born 1988 in Syria, is an artist and film maker based in Leipzig. Between 2010 and 2013 she studied journalism at Cairo University, Egypt. Purple Sea is her directing debut. Previous work includes Backyard (2018, assistant director, 26′),  Stranger’s Diaries (2019, with Khaled Abdulwahed, 8-channel video installation, 35′).