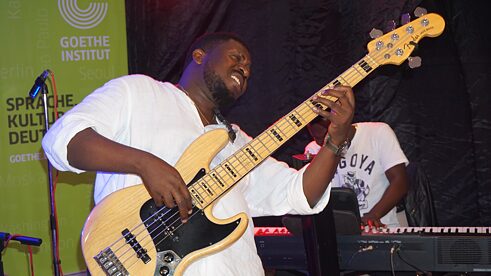 A cool night breeze from the Atlantic Ocean enabled leaves on several trees to shift listlessly as rich rhythms from five talented musicians filled the air at the Goethe-Institut in Accra.

In a performance that forms part of the Institut’s Covid 19 programmes, the Soul Nice group led by Bright Osei exhibited great tact and poise as they unfolded intricate compositions from individual members of the group.

Featuring Anthony Ansah (tenor sax), Anthony Adubofour (drums), Nicholas Mettle (piano), Kenneth Obi (talking drums) and Bright Osei (bass guitar) performed with passion and enthusiasm to a virtual audience as they try to adjust to what has been described as the “new normal”.

With suitable emphatic lines from Osei, Mettle and Ansah, the sound from the stage was heightened with drum beats from Adubofour and Obi ranging freely while minimal stage lighting added to the environmental poignancy of the stage.

A number of tunes including “Funky Jamestown” (Bright Osei), “Praise Him / Funk In the Air” (Anthony Ansah), “Worry Not” (Dave Corbus / Bright Osei) and “You Don’t Want to Know” (Nicholas Mettle), vividly revealed the power of improvisation and blending of cross cultural rhythms.
Interspersed with a series of harmoniously crafted solos, Osei, who is also a composer / arranger and his musicians filled the air with infectious drum beats, hyper funk textures and instinctive saxophone lines that sounded like a galactic artistic feast.

Band leader Osei has toured with a number of highlife greats including Jewel Ackah, Papa Yankson, Gyedu Blay-Ambolley, Paa Bobo, Daddy Lumba, Ofori Amponsah and Kojo Antwi among others. He subsequently moved into jazz and has been performing with the GH Jazz Collective