Rainer Werner Fassbinder’s thoughts about the films of Douglas Sirk were published in Fernsehen und Film, No. 2, February 1971. One of the films he mentions is All That Heaven Allows (1955).

Fassbinder describes the construction of space at the beginning of the film when Sirk introduces Ron Kirby (Rock Hudson), a young gardener, who initially looks small in long shots—like an extra—but slowly grows larger with the help of a close-up. He sits next to Cary Scott (Jane Wyman), the wealthy widowed owner of the house.For Fassbinder, the encounter of two characters from different backgrounds is both a simple and astonishing way to start a film—the viewer quickly understands the essence of what the film is about.

Three years later, inspired by All That Heaven Allows (ATHA), Fassbinder released the 1974 film Angst essen Seele auf (AeSa). Both films discuss social conflicts that arise from love between people whose ages are far apart. Fassbinder, however, adds a social dimension not found in ATHA: race. The plots of the films are quite similar, yet Fassbinder’s film does not make marriage the “final solution” or the dramatic climax of happiness. Marriage in ATHA is something that must be pursued in order to achieve eternal happiness. In AeSa, marriage is the beginning of mourning. The story is set in Munich after the Munich terrorist attack of 1972 in which 17 people died. The incident led to increased antipathy toward immigrants in West Germany, especially immigrants from the Middle East.

The main characters are El Hedi ben Salem as Ali and Brigitte Mira as Emmi, who regularly star in Fassbinder’s films. Ali tells Emmi he was born in Morocco but came to West Germany to work and live a better life. He is a Gastarbeiter, a worker from another country who went to West Germany in the 1950s to 1970s as a result of German efforts to rebuild the country’s infrastructure and economy after World War II.

The West Germany shown in the film is not an ideal place for foreign workers like Ali: in this West Germany most reject assimilation, whether subtly or openly. The logical consequence of such an environment is that foreign workers seek and create special spaces to survive, socialize and maintain their lifestyle. This space in Fassbinder’s film is a bar where foreign workers meet, listen to music from their homeland and speak their native language with each other. The bar is a safe zone for them at day’s end after being subjected to racist hostility from the majority of Germans they encounter during the day. The bar itself belongs to a German woman who is not interested in politics and leaves the bar space to them.

What happens when this particular space is infiltrated by a German who does not belong with the others? The issue is raised in the first scene of the film. Emmi is a cleaning lady. Although her name Kurowski – from her deceased husband – indicates non-German origin, Emmi does not belong to the group of foreign workers. She is looked at askance and experiences alienation. A situational reversal takes place—a German becomes a foreigner in her own country. Most of the shots in the bar show the scene from a medium to long distance. The anatomy of the room is clearly visible from the entrance to the dance floor. Emmi first sits on a chair next to the door, her position outside the group of people at the bar. The dance floor is furthest from the door. Ali approaches, asks Emmi to dance, and a negotiation of space transpires.

When they leave the bar, we are confronted with a West Germany that turns its back on the interior of the bar. The spatial division here is not focused on private and public spaces, but on German and non-German spaces, white and non-white spaces. The space thus has political consequences related to the racial hierarchy in West Germany.

Though Emmi’s apartment is her personal space, it is in a tug-of-war with socio-political conditions. She lives in a house occupied by other white German workers. When Ali enters Emmi's apartment, something similar to what Emmi experienced in the bar happens. But the opposition to Ali is more open, vulgar, and it requires a political solution: marriage. Yet this does not solve the problem.

Frames in the scenes and power relations

In addition to the socio-political position of the space, we must also see how Fassbinder frames the space. As in the scene in the bar mentioned above, most scenes are medium distance shots, with the result that the people and the room are not as sharply separated as in close-ups. Sometimes the frame seems to be left not to the camera but to the room itself. We see this several times, for example in the scene in the Osteria Italiana when Ali and Emmi sit at the door, in Emmi’s house when Ali and Emmi sit at the dining table, and at the end of the film when Emmi and Ali are framed by mirrors. Room components such as door jambs, windows and mirrors act as frames.

In my view, Fassbinder’s design is linked to the idea that the position of the space is always political. The practice of framing in films is always closely related to power relations. In the context of the film’s space, control over the space is left to the space itself. Fassbinder seems to want to emphasize that the characters are always in control of the politics of space, both public and private. No matter how hard they try, space will always be a political battleground. This helplessness gives AeSa a bitter aftertaste.

Fassbinder briefly describes the Douglas Sirk film ATHA in the same article: “This is kind of thing Douglas Sirk make movies about. People can’t live alone, but they can’t live together either. This is why his movies are so desperate” I think the same sentiment applies to Fassbinder’s works, especially to Angst essen Seele auf. 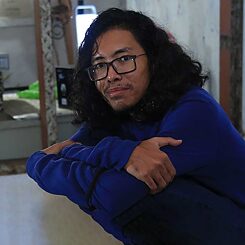 © Afrian Purnama Afrian Purnama was born in Jakarta. He studied at the Bina Nusantara University majoring in Informatics. As a member of Forum Lenteng, he is a curator and researcher of the Kultursinema program, which takes place annually at the Arkipel — Jakarta International Documentary & Experimental Film Festival. He is also one of the creators of the film Golden Memories — Petite Histoire of Indonesian Cinema that competed at the Documentary Film Festival 2018 (FFD) in Yogyakarta. Afrian is not only a freelance author but also an editor for Jurnal Footage (Jurnalfootage.net) since 2015. He has been a curator of Arkipel — Jakarta International Documentary & Experimental Film Festival since 2013.