Ana tells Robert of her hope to own a building that will withstand destruction. Then the two—who met at demonstrations against war policy—talk about the Vietnam War: “... like a big machine against a small tool, the machine does not manage to cut through the tool.” Then we see a moving camera showing a moving diorama scene in which several scenes (in the realm of war) are compressed, until finally three small children are seen re-enacting an execution (pistol to the head) while being recorded by a photo camera.

Next, in Ana and Robert’s room we see an exhibition of photos of the prisoners of Vietnamese citizens and sympathizers of Viet Cong American soldiers. As they look into the mirror in the middle of the scattered photos, the two interpret what they see in the images, try to guess what the background might be, and consider what happens when the photos are politicized by interest groups. Their dialogue becomes a scalpel that uncovers the potential of images.

These two sequences form the basis for designating Harun Farocki’s Etwas wird sichtbar (Before Your Eyes – Vietnam, 1981) a multimodal film. Farocki combines character dialogue, camera shots, fictional narrative style, and multi-layered settings to deconstruct the essence of what makes a film work: images. The focus is more philosophical than historical and arguably deviates from the general trend of “meta cinematic” styles. Because this has become a hallmark of his other works, Farocki’s cinema is “meta-image cinema”. This film illustrates fictional experimentation as an essayistic knife, combining political alignments, a love triangle drama, and the shaping of contemporary social realities.

The outline of the story is simple: it’s about Ana and Robert’s affair. They talk a lot about the Vietnam War when they are together. The film also deals with the impact of this major event on West German society, a war that connects to it through images in the mass media and books from abroad. Through this compilation, which includes “case studies” from the Vietnam War, Farocki speaks about visual and textual images. The conversations of a young couple having an affair are adorned with quotes from political, philosophical and literary works. On the side, Farocki also inserts commentary and illustrations about the war and includes a narrative about activists’ attempted attacks on Pentagon agents. In this piece I call these comments “moving diorama scenes”.

Before Your Eyes – Vietnam – a film similar to his shorter Inextinguishable Fire from 1969 – is one of Farocki’s long fictions and one that raises the issue of the Vietnam War. While Inextinguishable Fire addresses the impact of the war image on a consumerist society (echoing the napalm-burn industry), Before Your Eyes – Vietnam focuses more on the war image itself, or rather on a mediated war and the turbulence of events leading up to the fall of Saigon.

Farocki approaches the image as a philosopher questioning man. In this film, the statement of faith appears in the scene of a soldier describing his work as a visual forensics expert: “The philosopher asked, ‘What is a human being?’; I asked, ‘What is an image?’” This represents Farocki’s didactic reflections on understanding images and critiquing cinema as a “machine of the visible” (this term comes from Thomas Elsaesser’s “Harun Farocki: Filmmaker, Artist, Media Theorist”, in Harun Farocki: Working on the Sightlines). For Farocki, the image is no longer just information. The attempt to understand the horror of war is not accomplished by tracing and depicting the real image but by distorting the depicted image of war. Although we see in a fictional construction that the story of the Ana-Robert affair and a series of “moving dioramas” are connected in parallel, the fragmented scenes cohere in terms of their function as an essayistic construction.

The multimodality of the story, which Farocki brilliantly and poetically renders, stands out in a number of key scenes. First, in the “spatial images”: Robert and his friends are talking in a café about views in the cities of Edinburgh and Jerusalem. Second, the “textual parable” with reference to the agricultural management of the conflict parties: Ana and Robert see America as representing the Clausewitz text (Carl von Clausewitz’s book entitled On War (1832)) and Vietnam as representing the Lin Biao text (Lin Biao’s work entitled Long Live the Victory of the People’s War! (1965)).

Third, “ambiguity of imagery”: we see it not only in the scene about the Liberation Army’s decision to continue using bullets for political imagery in order to be officially recognized as a sovereign state government but also when Ana asks Michael about the hook from “First Elegy” by Rainer Maria Rilke (from a collection of elegies entitled Duino Elegies (1923)) and Michael responds by reciting Heiner Müller’s poem “Images” (Heiner Müller, “Images”, Geschichten aus der Produktion 2, Berlin, Rotbuch, 1974). Their conversation takes place when a television station reports the news (dated 29 April 1975) about the fate of refugees who died on the way to Đà Nẵng. It refers to the days of the capture of the cities of Hué and Đà Nẵng 25–29 March 1975 by the Vietnamese People’s Army towards the fall of Saigon.

The essence of these two poems is the limitation of humanity, the irony of idealism, and the contradiction of two symptoms: to achieve a solution and reform, people always go through problematic issues. When Rilke assumes that people must suffer terror in order to attain beauty, Müller implies class struggle is an attempt to establish justice that often requires methods contrary to humanity. These two texts reflect the image of a news documentary broadcast on television: the journey of war refugees to Đà Nẵng is portrayed as sad, although it was a historic moment, just moments before the end of the Vietnam War—a month later Saigon was defeated.

This film may not be as analytical as Farocki’s later works Serious Games I-IV (2009/2010) or Parallel, I-IV (2012–2014), but the use of fiction to hint at the potential of images and their political possibilities is a generous style that allows the audience to interpret freely. In this context, images (both visual and textual, even verbal) are no longer limited to material but to things that depend on the way they are constructed. 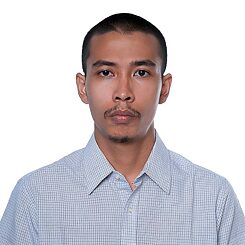 © Manshur Zikri Manshur Zikri was born in Pekanbaru, Riau, in 1991. He is a writer, researcher, critic and independent culture activist in the areas of media, art and film. He is a member of Forum Lenteng, an egalitarian non-profit organization in Jakarta that focuses on cultural activism. Zikri has worked as a curator and art director at Cemeti – Institute for Art and Society in Yogyakarta since 2019. From 2014 to 2019 he was a curator and part of the artistic director team for Arkipel – Jakarta International Documentary & Experimental Film Festival. He was also responsible for film selection for the Documentary Film Festival 2020 (FFD) in Yogyakarta, particularly for the international film competition program.