(Re)Creations in Isolation
Strengthen Your Faith and Your Immune System

On 15 March, 2020, the mayor of Surakarta (Solo), FX Hadi Rudyatmo declared a state of “Extraordinary Occurrence” (KLB) in our city after two people tested positive for COVID-19. At the time, my mother was living at home by herself, while I was still in Yogyakarta. My father had just passed away one month earlier, and I felt anxious and decided to return home and undergo self-quarantine.

During the first week of quarantine, I felt like living in a dead city. But even so, a quiet atmosphere can result in your own serenity. The sun was shining brightly, and when day turned into night, we could hear the sound of different insects. When the rain came, it was pleasingly not too cold. However, every day I still worried. I was afraid when my mother caught a cold and started coughing. I couldn’t help but suspect that she had contracted COVID-19, not the common flu. I think it’s horrible when our bodies feel sick but we don’t know where the pain comes from, and it’s even more horrible when it turns out that medical experts don’t have a cure yet. 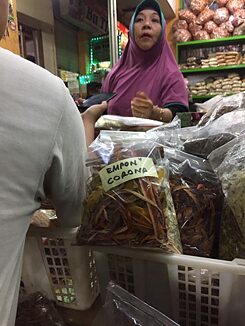 A vendor at Beringharjo Market in Yogyakarta sells “Empon-empon Corona” (Corona root plant). I uploaded this photo to my Instagram account and received a lot of responses from my friends, mostly a laughing emoji. At that time – around mid-March 2020 – the COVID-19 issue was not as scary yet as it is now. | © Bani Nasution In the midst of my fear, I remembered shooting at the house of Mas Bram (Bramantyo Prijosusilo), near Ngawi. It was there that I first learned how to make jamu (traditional medicine) with the name Golden Paste. One ingredient to make this paste is turmeric, which is said to help strengthen your immune system. I believe that our body can heal itself if we have a good immune system. That’s why I went to Beringharjo Market in Yogyakarta as soon as I could. Why did I have to go all the way to Yogyakarta? Because that way, I could also see my girlfriend who is studying there (haha!). We bought a variety of medicinal ingredients and saw a vendor selling a special potion called “Empon-Empon Corona.” I shared my experience by uploading a photo to the stories on my Instagram account. Many of my friends responded by sending me a smiling emoji. At the time, COVID-19 was already well-known but hadn’t reached the level of terror like today (early April 2020). Maybe my friends still underestimated the situation and mistook reality for comedy, because even medical science couldn’t find a cure for COVID-19 yet, so how come traditional medicine like jamu could claim to be an antidote to Corona!

However, I was still enthusiastic about trying to make Golden Paste. I even thought, maybe Indonesians – especially my family around me – are rarely sick because we still follow the tradition of consuming various spices, commonly referred to as “empon-empon.” My girlfriend and I decided to make the Golden Paste, which consists of turmeric, curcuma, ginger, and Javanese chili. These ingredients are cooked for several hours using low heat and coconut oil or olive oil, stirring slowly until the ingredients dry and clot. After I posted about Golden Paste on Instagram, a lot of my friends wanted to try it. That made me happy, and I sent it to many of them. We didn’t ask those who were interested to try it for payment, only to cover the shipping costs. They could also come directly to my house to pick it up. 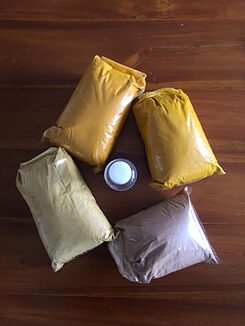 © Bani Nasution At the moment, the informal sector is totally dead. To my left and right, I see neighbours who are not working anymore and who worry about getting enough food on the table. My mother, who is a seamstress, also doesn’t work anymore because there are no more orders coming in. My sister, who usually receives orders to make batik uniforms, has also lost her customers because the schools are currently closed and don’t need new uniforms. The same goes for myself: my plan for shooting was postponed until further notice – I don’t even know when. Some of the businesses that I had established with friends before the COVID-19 crisis, like making a fermented drink – similar to a local wine – almost don’t have any customers anymore. The people around me and myself, we not only face a threat to our health, but also to the economy, which is even scarier.

I think, in a time of crisis like this, I’d rather focus on social activities that are related to health. In addition to making Golden Paste, I also opened a public kitchen, a very small one in the backyard of my house. Every day, my mother and I cook something simple, and whoever needs food and happens to be in our neighbourhood, is invited to stop by and eat for free. We also exchange side dishes with our neighbours. Some of my friends who have lost their jobs due to the COVID-19 crisis come to my house only to kill their free time. Our kitchen has become a place where we cook and eat together, while discussing what we can do to survive the crisis and its aftermath.

In the future, I aspire to pursue my own business in making traditional medicine and strengthen its brand, “Perjamuan.” I’m also excited to take my band – which is called ///AGAMA\\\ and where I play drums – to the next level.

Back to (Re)Creations in Isolation