© Goethe-Institut Irland, TAP
Traveling the European continent has never been easier: air connections to the mainland, for example, often cost less than a cab - the goal of the week-long European Languages and Cultures Program is to introduce 10th grade students to the European cultural institutes in the city of Dublin, thus facilitating their access to the cultures and languages of Europe. 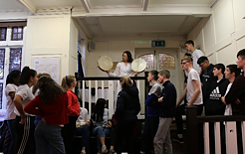 (C) Goethe-Institut Irland To this end, the Trinity Access Programme and the Goethe-Institut Irland collaborate with a number of European Union National Institutes of Culture (EUNIC) to organize several program days for TAP-linked schools. The program is an outgrowth of the Freiraum Project, which was very successfully adopted until 2021 but has now ended.

Each partner institution organizes one day a week, resulting in a varied program. In this way, the students often have the opportunity to discover not only the food, language and literature, but also the theater and cinema of European cultures.

What has happened so far ...

European Languages and Cultures Programme 2020
In line with COVID19 guidelines, the Goethe-Institut Irland was delighted to host their first-ever completely digitised week of the Freiraum programme "European Languages and Cultures Festival". In co-operation with the Trinity Access Programme (TAP), this event took 80 under-represented Transition Year students on a virtual interrailing tour around Europe from the 16-20 November 2020.

The involvement of various European institutions meant that students experienced different cultures and languages throughout the week. The first stop on their tour was in Germany with the Goethe-Institut Irland, then Spain with Cervantes Dublin, France with Alliance Française Dublin and finally Italy with Istituto Italiano di Cultura. The week's events concluded with a visit to the European Commission and European Movement Ireland. By participating in the festival, the students discovered the advantages of cultural exchanges and foreign language learning.

12.11.2020 Virtual TAP Orientation
As the „European Languages and Cultures“ Programme took place completely in digital format this year, an orientation was held for the students prior to the event. The Freiraum Project was presented by Julie Deering-Kraft from the Goethe-Institut Irland and Daniel McFarlane of the Trinity Access Programme (TAP) and questions regarding how the week would proceed were clarified. Also, the students became acquainted for the first time with their “ambassadors” Peadar, Dove and Klaudia, as well as the interns of the Goethe-Institut's Cultural department, Muireann and Brit, who accompanied them throughout the week.

After a “walking debate” on the theme of freedom with the ambassadors, the students divided into smaller groups and took part in taster language classes. In these sessions, they learned how to greet someone, introduce themselves and say goodbye in German. Afterwards, the students were sent outside to take pictures of freedom in their immediate vicinity which later would be joined together to create an Insta Gallery. After lunch, everyone watched the short film “Rhinos” and a workshop was held on the topic of “Communication without Language”. As part of this, the students played charades and won other prizes.
The day ended with a live stream from Berlin as the students took part by asking many questions.

17.11.2020 A virtual day at the Instituto Cervantes Dublín
On day two, the students found themselves in Spain as the Instituto Cervantes Dublín hosted a day full of activities. In the morning, the students listened to #EuropeansAgainstCovid19 stories of solidarity, and tummies rumbled as they later discovered Spanish gastronomy. They then had a language class and learned how to introduce themselves in Spanish. After lunch, they became acquainted with Spanish literature, illustration and music. The day wrapped up with a virtual live stream from the city of Salamanca, where the students got to ask lots of questions about the Erasmus programme, university life and the standard of living in Spain.

18.11.2020 A virtual day at the Alliance Française Dublin
The Alliance Française Dublin transported the students to France on the third day. After an informative welcome session and video tour, the students took part in languages classes and prizes were won. These taster classes had a significant purpose as the students were given the language tools to then complete a virtual escape room task in groups. After a busy morning, the students relaxed as they enjoyed a "musical nap", listening to the voices and sounds which fill the streets of Paris. The day concluded with a virtual tour of the city as the students asked questions and learned about the significant monuments dotted throughout the city.

19.11.2020 A virtual day at the Istituto Italiano di Cultura Dublino
On the fourth day, the students travelled to Italy. During a virtual mini-tour, they learned about the Istituto Italiano di Cultura in Dublin and took part in an Italian language taster lesson. The high point of the day was the entertaining pasta workshop with Giuseppe which prompted numerous students to eat pasta for lunch. As well as that, a special live stream took place from Italy as an Italian professor showed off the city of Florence from his balcony due to the lockdown restrictions.


European Languages and Cultures Programme 2019 - 2020
This programme was aimed at Transition Year students who are interested in discovering new cultures and art. The language class was aimed at those who had already learnt the language up to Junior Certificate level as well as absolute beginners.

This series of six workshops provided an interactive introduction to different aspects of European cultures and languages. The workshops took place on the second Thursday of the month from October 2019 to March 2020. The students participated in one morning, lunch and afternoon session at each cultural institute. The schedules for these events were as follows:

10.10.2019 A day in Trinity College Dublin
On the first day, the young people were welcomed to Trinity College Dublin and introduced to the Freiraum Project and the European Languages and Cultures Programme. They became familiar with the campus through an Insta-tour and ate lunch in the university's dining hall. During the afternoon, they were advised on their oppertunities with languages at third level. This was directly followed by a German quiz with the TCD Germanic Society. The day concluded with a poster design on the topic of Freiraum and Freedom in Europe.

14.11.2019 A day at the Goethe-Institut Irland, Dublin
The Goethe-Institut is the cultural institute of the Federal Republic of Germany and operates worldwide. It promotes international cultural exchange and the study of the German language abroad. The Goethe-Institut sees itself as an institution with a European mission. It stands for a vision of European integration, proposes a common European cultural space based on multicultural diversity and autonomy, and advocates a corresponding set of values that encompasses integration, openness, generosity and justice.

05.12.2019 A day at the Alliance Francaise
The award-winning Alliance Française Dublin is the third largest in Europe and the first in a non-French speaking country. The aim of the Alliance Française in Dublin is to promote French culture and create a space for intercultural exchange between Ireland and the cultures of the French-speaking world. The branch has more than a century of history, but has existed in its current form for almost 60 years.

13.02.2020 A day at the Instituto Cervantes
The Cervantes Institute is a worldwide non-profit organisation founded in 1991 by the Spanish government. It is named after Miguel de Cervantes, the author of Don Quixote, perhaps the most important figure in the history of Spanish literature. The Cervantes Institute,which is a government agency, is the largest organisation in the world responsible for promoting the study and teaching of Spanish language and culture. This organisation has established itself in over 44 different countries and 87 centres dedicated to Spanish and Hispanic-American culture and language.