Robots in Residence
With David Beattie and Niamh Donnelly 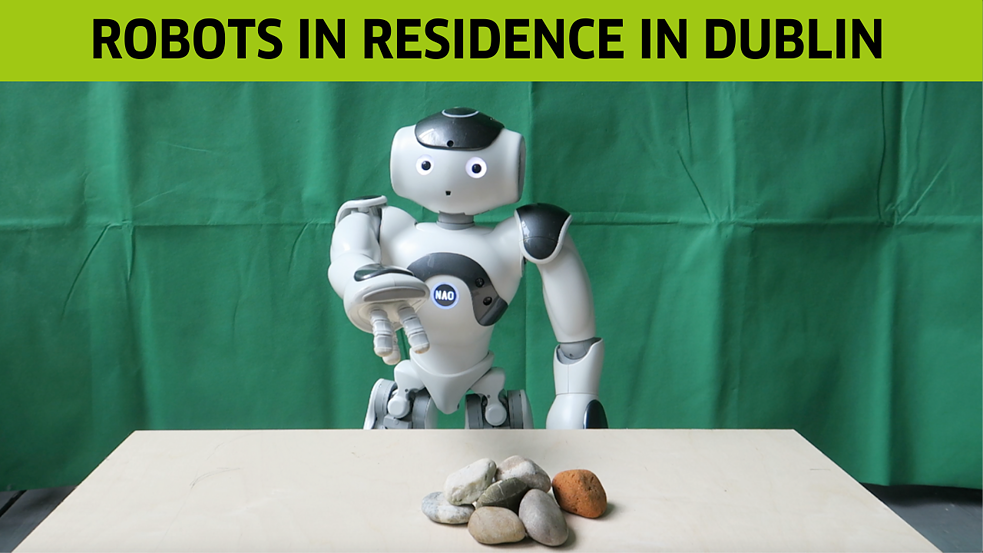 International research networks are working on robots that move and behave like humans. The promise is that so-called "social" robots will alleviate our loneliness, motivate us to exercise, help out in everyday life and assist us in the event of illness. But a lot has to happen before this vision becomes reality.

Since June 2020, two humanoid NAO robots, developed by the Japanese-French company SoftBank Robotics, have been touring throughout Europe. Artists and coders are approaching their "social" potential from different perspectives and equipping them with new capabilities. Before the start of their journey, the robots were taught their first skills at the Goethe-Institut Head Office in Munich: They can introduce themselves, tell jokes and do some Tai Chi exercises. Since then, the NAO robot has learned choreography as well as every-day actions such as grabbing and placing items and trained in various sports such as soccer and boxing at its stops in Rome, Milan, Bremen, Groningen,  Glasgow and Dublin.

The project is similar to other residency programmes in which artists are invited to live and work in another country and culture for a period of time to gain new perspectives. During the various residencies, local artists and creative coders work with the robots and enrich them with new skills.

In autumn 2021, all artists and coders will come together in Dresden in Germany (or digitally if that's not possible) to share their experiences and expand their network.

Robots in Residence is an initiative of the Goethe-Institut, integrated into the project Generation A = Algorithm, supported with special funds of the German Federal Foreign Office for the German EU Presidency 2020. It takes place in cooperation with the RoboticLab of the Technische Hochschule Wildau.

In February and March 2021, one of the two NAO robots, christened GAIA (Generazione Algoritmo Intelligenza Artificiale), held a residency in Dublin. Artist David Beattie, together with coder Niamh Donnelly, dealt with touch, hand movement and haptics of the robot. Therefore they were trying to get it to grasp objects and carry them from one place to another. As part of the Dublin residency David Beattie also created a Post-Human NFT. Robots in Residence Dublin was supported by the Science Gallery at Trinity College, The Digital Hub and Akara Robotics.

​
...that GAIA is not only the name of our NAO robot (as acronym for Generazione Algoritmo Intelligenza Artificiale), but also the name of an Ancient Greek Goddess? Gaia represents the Earth, making her one of the primordial deities. She is usually portrayed as a dignified woman, physically connected to the ground.