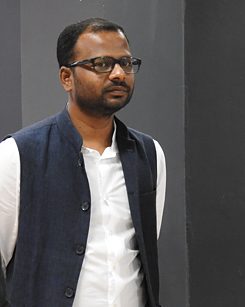 Jeevan Xavier @ Zentralwerk (Dec 2019 - Jan 2020)
Can I see myself in you?, was a two-part art installation and performance by JLX aka Jeevan Xavier during his stay at Zentrawerk, Dresden as part of bangaloREsidency-Expanded. Zentralwerk is a cooperative of creative people from many walks of life who live and work in the premise. More studios are rented out to artists from a range of creative backgrounds. The campus is a renovated arms factory from the Second World War which is now a creative complex of galleries, auditorium, studios and residential apartments.

First part of the work: The Others was a series of interventions with bright fuchsia colour fabric in the landscape of Dresden, known for its beautiful architecture and landscape. At certain locations, the fuchsia fabric was complemented by an orange fabric; draped alongside each other. JLX draped 12 meters of bright coloured fabrics on or around buildings, trees and monuments. The fuchsia fabric symbolising the people of India, and the marigold orange fabric symbolising India as a place. Dresden as a backdrop symbolised the fleeting nature of change. These temporary installations were symbolic and intended to create visual contrast in the cold winter landscape of Dresden, through colour.

© Jeevan Xavier The second part of this work was at Kabinett, Zentralwerk on 23rd January 2020. It was conceptualised on the idea to commune over food. The viewers were invited to have a simple meal of lentil and rice cooked by the artist. The artist had made five small scale sculptures in synthetic clay of different human faces for this. Part of the gallery was converted into a restaurant along with two installations of fabric and photographs of The Others. There were five dining tables, each table was neatly laid as in a cafe. On the table was a white tablecloth, placemats made of sewn leaves from Bangalore, a white plate, fuchsia cutlery and napkin, a sculpture and a mirror.