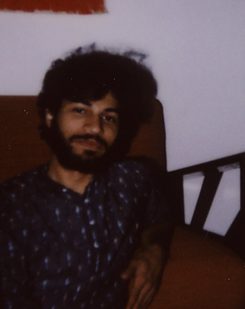 Nihaal Faizal @ ZK/U (Nov - Dec 2019)
The residency at ZK/U in Berlin allowed me the space to experiment with new materials, uncover new research subjects, and also to encounter historical and contemporary works of art that I had previously only seen in books and images. It enabled me the space and time to pursue a new project, spend time with otherwise unavailable books and material, and also to explore a new urban environment.

During my time at the residency, I began a series of drawings titled ‘Shaktimaan SFX’, which brings together copies of the various digital special effects used in the popular Indian TV show Shaktimaan. Broadcast between 1997 and 2005, Shaktimaan was the first show produced in India to present both a superhero, and an extensive display of computer graphics. Widely popular, especially amongst children, these now outdated special effects are copied using another outdated technology, carbon paper, which I use as a means of translation. Back in India, the drawings continue, and so do some of the conversations that began in those two months. As such, I had a wonderful time, and if the Goethe Institut was inclined towards offering me another residency, I would accept in an instant.