Berlinale Bloggers 2022
Being yourself when no one believes you

Nic, Leo, Andrea and Raff are four young trans people from different backgrounds and with different personalities and plans. Nicolò Bassetti’s documentary film “Nel mio nome” (Into My Name), produced by Elliot Page, follows the four of them over a two-year period and tells their story.

“Why don’t they just leave us alone?” asks Leo, in criticism of a system that constantly requires trans people to prove their gender identity. Even with hormone therapy already under way, there’s a long road ahead before they can amend their names on official documents. Nic is delighted with each individual hair that sprouts on his chin, but he knows that he will have to spend another two years proving his identity with ID documents that no longer represent his appearance. “I’m not going to the post office, just so you know,” he says jokingly to his partner. But the problem is real, there’s nothing funny about it.

Andrea lives with his boyfriend and his appeal lies in his original personality. He has a typewriter named Valentina, and when asked as a child whether he was a boy or a girl he responded with silence – because neither answer seemed correct to him. Raff is a special kind of guy too: he has a passion for bikes and is building a pink one, which he calls Bunny. As a child, he hated pink, because he was also a victim of stereotypes that made life more complicated instead of simplifying it. Now that he can be himself at last, pink is his favourite colour. 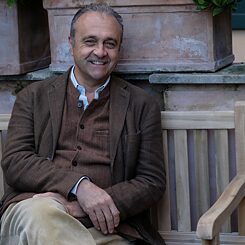 Nicolò Bassetti - Nel mio nome from Nicolò Bassetti (ITA 2022, Section Panorama) | © Matteo Bassetti In the film, they repeatedly address the urgency of considering more perspectives in narratives about gender transitions. The protagonists articulate a rejection of a rigid classification into men and women based on clichés and cultural conditioning just as frequently.

“I haven’t turned my back on one fiction in order to live another,” stresses Leo and explains that he doesn’t want to represent a false image of masculinity. His transition was an “act of truth” and he doesn’t intend to ruin it by harking back to outdated labels. Quite the opposite, he wants to create a new world in which all people can be themselves. His name is Leo. Everything else is unimportant.

Lucia Conti is the editor of Il Mitte, an online magazine for Italians abroad and especially in Germany. She has lived in Berlin since 2012.