German Series in India
Unorthodox - Escaping to a new life

The four-part “Unorthodox” not only tells the stirring tale of a young woman’s escape from New York to Berlin. Made by the same people who brought us “Deutschland 83”, and celebrated by TV fans and critics alike, it also offers a fascinating insight into the parallel universe that is an ultra-orthodox Jewish community, where life is cut off from the rest of the world.

“God expected too much of me. Now I must find my own path.” In two matter-of-fact sentences, 19-year-old Esther Shapiro (Shira Haas), known as Esty, sums up why she “left without telling anyone”. This is a remarkably unemotional way to describe a young woman’s audacious bid for freedom that saw an ultra-orthodox Jew from Williamsburg in New York end up stranded in Berlin: while her Hasidic family gathered for their Friday sabbath meal, Esty made a bolt for JFK airport in only the clothes she stood up in – fleeing from an isolated, insular world that had become her prison, and whose conventions, moral principles, and patriarchal rules she found suffocating. It is an escape from a joyless arranged marriage with Yanky (Amit Rahav), a man who is kind-hearted but entirely under the thumb of his domineering mother, and into an unfamiliar but autonomous life. What she doesn’t yet know at this point is that she is pregnant.
A mini-series from Netflix, “Unorthodox” addresses a subject that is as complex as it is potentially explosive. The drama is based on the autobiographical bestseller “Unorthodox: The Scandalous Rejection of My Hasidic Roots” (Simon and Schuster, 2012), in which New York-born Deborah Feldman recounts how she broke with the Hasidic Satmar community in Brooklyn. Born in 1986, Feldman had turned her back on her ultra-orthodox Jewish family shortly after her 23rd birthday to enable her young son to live an independent life. Both now live in Berlin.

“Unorthodox” uses flashbacks to reveal Esty’s backstory and her family’s past – her grandmother was forced to flee from her Hungarian homeland to escape Hitler’s Nazi henchmen and never managed to get over this or the murder of her relatives; her father was addicted to drink, and Esty’s biological mother is an outcast because she dared to cut her ties with the religious community in a bid to lead an independent life – in Germany of all places. For a long time, Esty despises her for this decision, believing her to be a bad mother, though suppressing the fact that she too rebels increasingly often against the rigid conventions that dictate her everyday existence and even her private life. A young woman thirsty for knowledge, she soon finds herself neither willing nor able to accept her fate as a wife whose job it is to have children. So her only option is to seek refuge with the mother she doesn’t know. 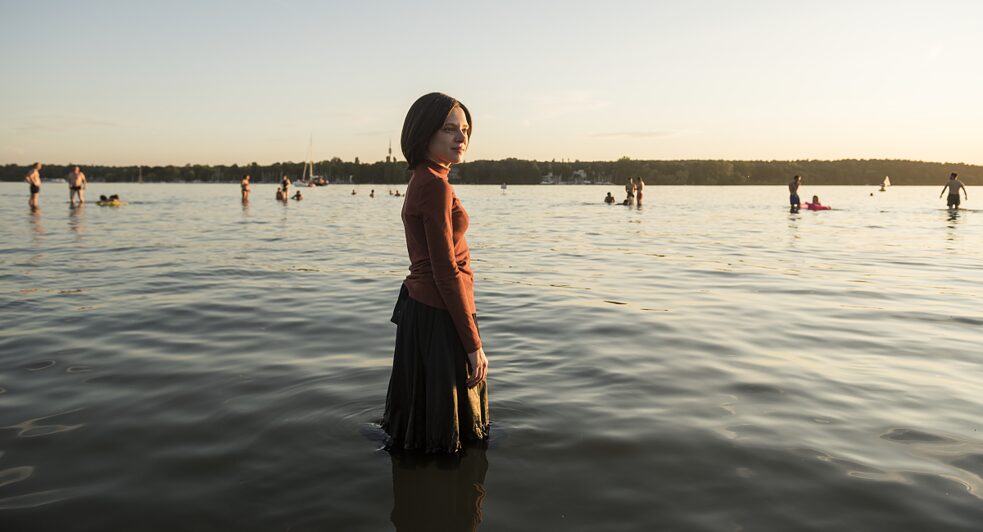 Die Protagonistin der Serie UNORTHODOX, Esther Shapiro (Shira Haas), genannt Esty, steht bis zu den Knien im Berliner Wannsee. | © Netflix; Foto: Anika Molnar Her quest to find herself leads Esty to a music conservatory in Berlin, where she meets an international group of students. A colorful bunch, they not only give the new arrival a crash course in youth culture and joie de vivre, but also show Esty ways of coming to terms with the horrors of the Nazi era. The timid young woman is transformed as she discovers and marvels at all that Berlin has to offer, is intoxicated by the beat of electronic music, and dreams of a piano scholarship. In what is probably the most poignant key scene of the series, Esty uncovers the shaven head that is typical of ultra-orthodox wives, abandons her sheitel (wig) to Lake Wannsee, and begins to swim, free at last. This poetical moment is not followed by any happy ending, however, as her husband Yanky and his scheming cousin Moishe (Jeff Wilbusch) are hot on the heels of our heroic renegade, determined to “rescue” her unborn child. Thus the four-part series adds some crime drama twists to its “fish out of water” story of emancipation.


“Unorthodox“ has the viewer riveted right from the very first scene – not least thanks to the outstanding Shira Haas (“Nobel Savage”). A star of cinema and series back home in Israel, Haas describes Esty as “probably the most complex character I’ve ever played”. A heart-rending performance is likewise given by Haas’ Israeli colleague Amit Rahav, who plays Esty’s soul-searching husband Yanky. Israeli-German actor Jeff Wilbusch’s portrayal of Yanky’s cousin Moishe, a man torn between his religious beliefs and his addictions, is all too realistic; perhaps this is because of the past that Wilbusch associates with “Unorthodox”. Known in Germany from the hit series “Bad Banks”, the actor grew up in an ultra-orthodox Haredi community in Mea Shearim (Jerusalem) that he left at the age of 13 to head for Amsterdam.

The highly-successful producer and author Anna Winger (whose works include “Deutschland 83”, “Deutschland 86”, and “Deutschland 89”) and her co-author Alexa Karolinski are behind this internationally-acclaimed series. It was directed by the actress and filmmaker Maria Schrader (“Stefan Zweig: Farewell to Europe”), who also starred in Winger’s “Deutschland” trilogy. Not least because the series was filmed to a large extent in Yiddish, most of the actors that appear in it are Jewish. “We wanted people who either speak or are familiar with the language”,  said Producer Winger to Variety magazine. What is more, she explains, there are numerous film and television projects featuring Jewish stories that involved not a single Jew either behind or in front of the camera. “We felt it was important to change this”, says Winger. 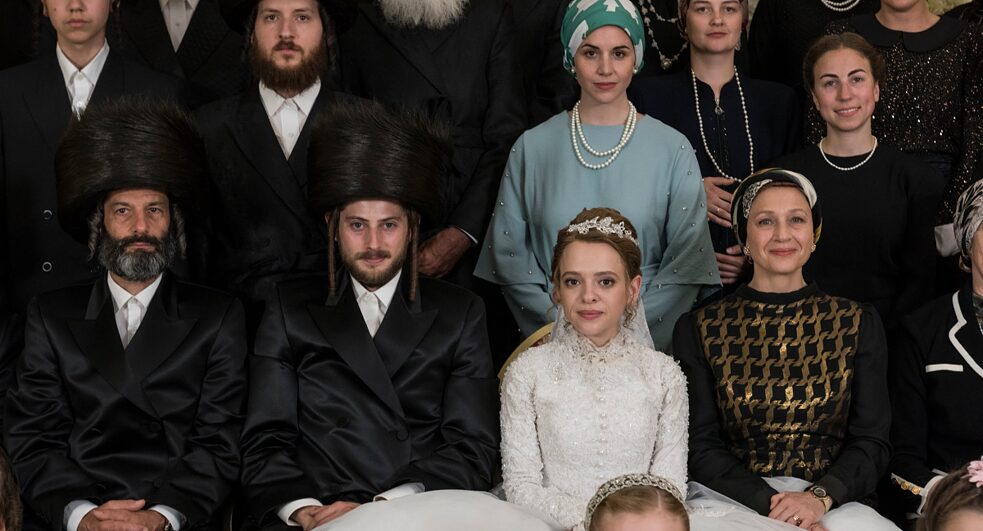 Unorthodox: Yanky (Amit Rahav) und Etsy (Shira Haas) unter ihren Familien auf ihrem Hochzeitsfoto | © Netflix; Foto: Anika Molnar The director Maria Schrader and her cameraman Wolfgang Thaler employ sensitive visual imagery to conjure up Esty’s world. Although they use shades of beige and brown to depict her life in the ultra-orthodox Jewish community as an increasingly oppressive nightmare, they nonetheless succeed in capturing in atmospheric moments the connectedness, rituals, and festivals that characterize the community, rather than discrediting it. So although “Unorthodox” tells the story of a young woman’s battle to liberate herself from her religious straightjacket, this by no means implies that it is some sort of final reckoning with the community; rather it is a touching search for meaning in which all the protagonists are forced to face their internal conflicts, and in some cases also their demons. Despite the series ending on a reconciliatory note, however, we do not discover how and whether they succeed.

Esty schwimmt sich frei | © Netflix; Foto: Anika Molnar So perhaps it is not surprising that fans of the four-part series were already speculating shortly after its launch about whether a sequel would be forthcoming. As things currently stand, it is not at all clear whether we will ever discover what Esty does with her hard-won freedom. By way of consolation, the author Deborah Feldman gives an impressive account in her second autobiographical novel “Exodus” of how she analyzed her past, traced her family’s history, and discovered her own identity.


Netflix Original "Unorthodox"; 4 episodes @ 53 - 55 minutes.
The four-part German original mini series, written by Anna Winger and Alexa Karolinski, is inspired by Deborah Feldman's bestseller of the same name.
Directed by Maria Schrader. Shira Haas, Jeff Wilbusch and Amit Rahav play the main roles.
Unorthodox was shot in Yiddish and English and has been running exclusively and worldwide on Netflix since March 2020.

From screenplays to wild parties – Angela Zierow spent years in Los Angeles experiencing the everyday craziness of Hollywood life at first hand. Before turning her back on Hamburg and its bad weather, she worked as an editor on the German TV and movie magazine cinema, and wrote for lifestyle magazines such as Max, Galore, and Vanity Fair. These days, she shuttles between Los Angeles, Hamburg, and London, always in search of new film stories and the perfect post-movie cocktail, and is as convinced as ever that hers is the best job in the world.