German Series in India
To Hell with Dr. Freud...and back

​Netflix teams and Austria’s ORF network have produced an eight-part series about Sigmund Freud. The diagnosis: Freud is no history lesson, more like a lurid graphic novel come to life.

Time was when a TV mini-series about Dr. Sigmund Freud (1856–1939) would most likely have been a BBC production, with tony production values and actors speaking crisply enunciated English with Viennese accents. That show would have been a talky, genteel affair, with perhaps a slight melodramatic gloss thrown on Freud’s life to help an edifying history lesson go down more smoothly. Nothing too taxing for the audience.


In the streaming battles of the 21st century, it’s a different story and a different life story for the good doctor. In the eight-part serial Freud, a co-production of Netflix and Austria’s ORF network, a strapping young Doktor Freud becomes enmeshed in an occult conspiracy that threatens the Austro-Hungarian empire. Freud skims a few biographical details from Freud’s life, but in the service of a period-piece crime thriller blended with supernatural fantasy and horror. The result is a full-blown Mitteleuropa phantasmagoria.
As Freud opens in 1886 Vienna, brooding 30-year-old Freud (Robert Finster) can’t get his fellow medical doctors to take his work-in-progress theories about hysteria and the unconscious seriously. His colleagues openly jeer at him and adding to the sting, Freud is bitterly aware that Vienna’s habitual anti-Semitism will keep him from rising too far. No wonder he dips into his stash of cocaine every chance he gets. (To judge by Finster’s shirtless physique, Freud’s coke habit does not keep him from working out for two hours a day.) By chance, Freud’s medical training draws him into a murder investigation led by the grizzled war veteran Inspector Kiss (Georg Friedrich). The prime suspect is a high-ranking military officer, but Kiss refuses to give up the case, at great risk to his own life. 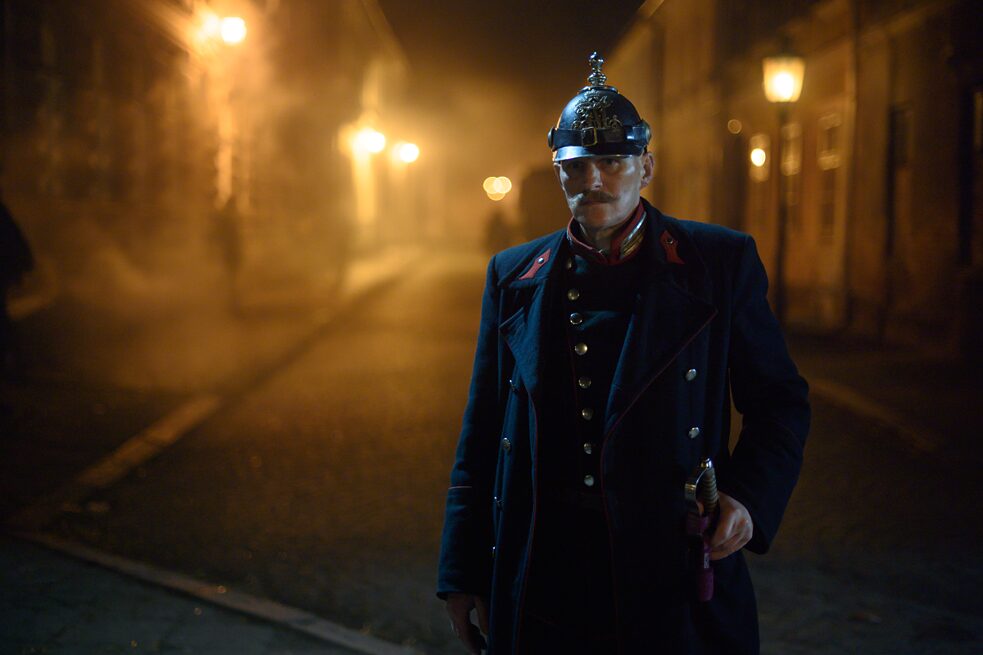 Promo Still aus der Netflix Serie "Freud": Inspector Kiss ( Georg Friedrich) | © Netflix, Photo: ©Jan Hromadko/SATEL Film Gmbh/Bavaria Fiction Gmbh Meanwhile, Freud is invited to a séance hosted by Hungarian social climbers Viktor and Sophia Szápáry (Philipp Hochmair and Anja Kling), who are like a Habsburg-era version of Boris and Natasha from Rocky and Bullwinkle. They tout their séance as an outlandish amusement for jaded aristocrats, but their real goal is to lure in Crown Prince Rudolf (Stefan Konarske), to brainwash him and turn him against his father, Kaiser Franz Josef (Johannes Krisch).
Viktor and Sophia seek nothing less than to overthrow the dual monarchy of Austria-Hungary, so that Hungary can claim independence. (Maybe someone in Budapest is re-editing Freud right this minute to make the Szápárys the heroic leads of the series.) Their secret weapon is the mysterious medium Fleur Salomé, and with a name like that, how could she not summon the dead? The séance proves to be far more than a parlor game when Fleur (Ella Rumpf) enters a trance and, trespassing boundaries of space and time has a sinister vision of an abduction. Freud recognizes in Fleur a fellow visionary, and a transgressive affair soon ignites between them. 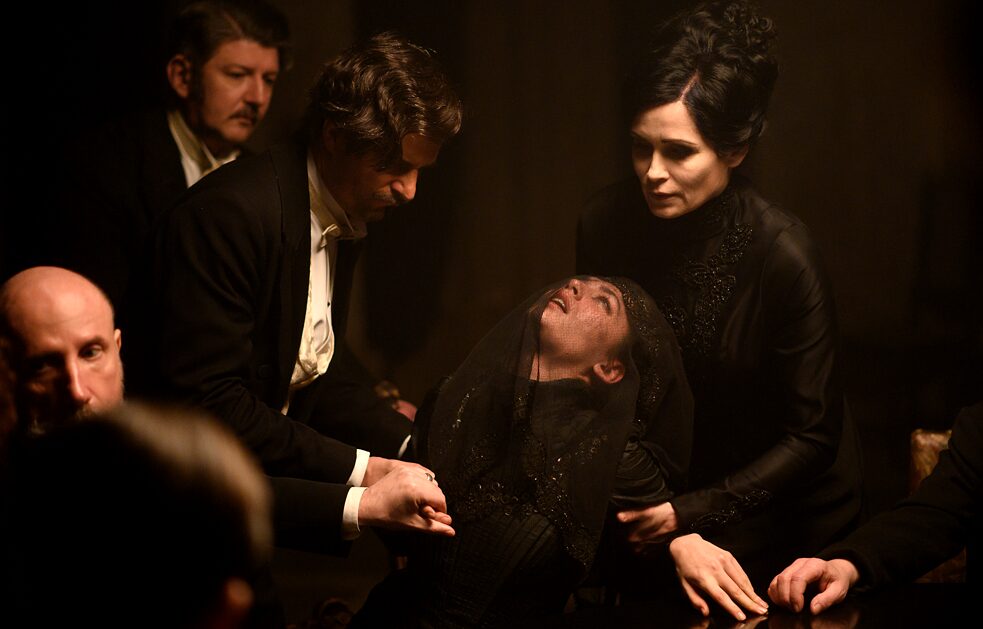 Promo still aus der Netflix series "Freud": Viktor und Sophia Szápáry halten eine Séance. | © Netflix, Foto: ©Jan Hromadko/SATEL Film Gmbh/Bavaria Fiction Gmbh Viewers willing to jettison any sense of the historical record will find the early episodes of Freud rich with mood and mystery. Every episode is an eyeful and then some, but audiences hoping for a vicarious tour of the Ringstrasse or any of Vienna’s landmarks should know that Freud was filmed entirely in Prague. The city of shadows depicted here often has more in common with the dream-like Prague of popular imagination (you expect a golem to trudge by any minute) than the Vienna of imperial pomp and bureaucracy. And director Marvin Kren evokes German Expressionism so often with his imagery that Freud also brings Weimar Berlin to mind as much as the capital of the waltz and Sachertorte. 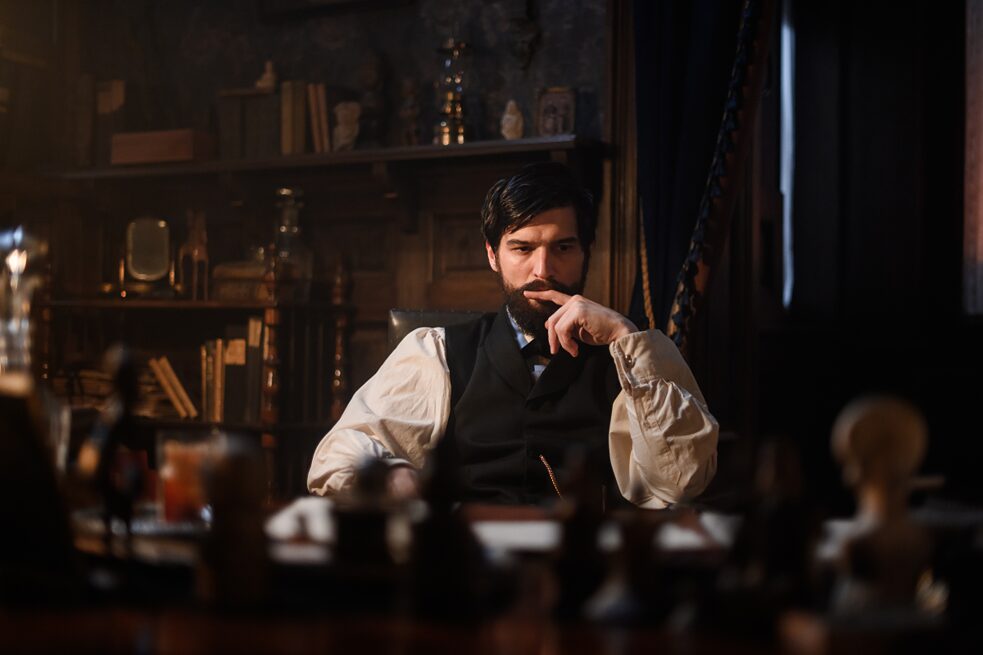 Promo Still aus der Netflix Serie "Freud": Freud (Robert Finster) an seinem Schreibtisch | © Netflix, Photo: ©Jan Hromadko/SATEL Film Gmbh/Bavaria Fiction Gmbh Vienna-born Kren is best known for creating the gritty, award-winning crime drama 4 Blocks (2017), but his more relevant credit here might be his Berlin zombie feature Rammbock (2010). Kren and cinematographer Markus Nestroy stage creepy moments with flair: a pursuit through Vienna’s murky canals suggests a silent movie in muted color, and Fleur’s eerie visions might lead a viewer to think she’s discovered a portal between 19th-century Vienna and the 20th-century town of Twin Peaks. The most memorable jolt comes when a bloody, naked apparition starts belting out opera. Kren misses no opportunity to stage a bloodbath. As Freud wears on, it can seem as if the point of all the sumptuous costume and production design is to be drenched in gore. The storyline becomes spectacularly unhinged, with a haunted apartment, demonic possession, freaky sex, and enough massacres to fill a splatter-film marathon. By the end, there’s not much left to be sublimated or repressed in this incarnation of Habsburg Vienna. It’s the conceit of this historical pulp fiction that all of the unholy carnage the young Freud witnesses validates his theories and vaults him forward in his world-changing career.

As much as Freud though, it’s Fleur and the dogged Inspector Kiss who prove worth following. In the past, veteran Austrian character actor Georg Friedrich has stolen the show by playing seedy lowlifes and bohemians in films by the late Michael Glawogger, among others, so his turn as the grimly righteous police officer Kiss marks a fascinating reinvention. He’s well paired with Christoph Krutzler as Kiss’ Obelix–like deputy Poschacher, whose droopy mustache provides the show’s sole note of comic relief. 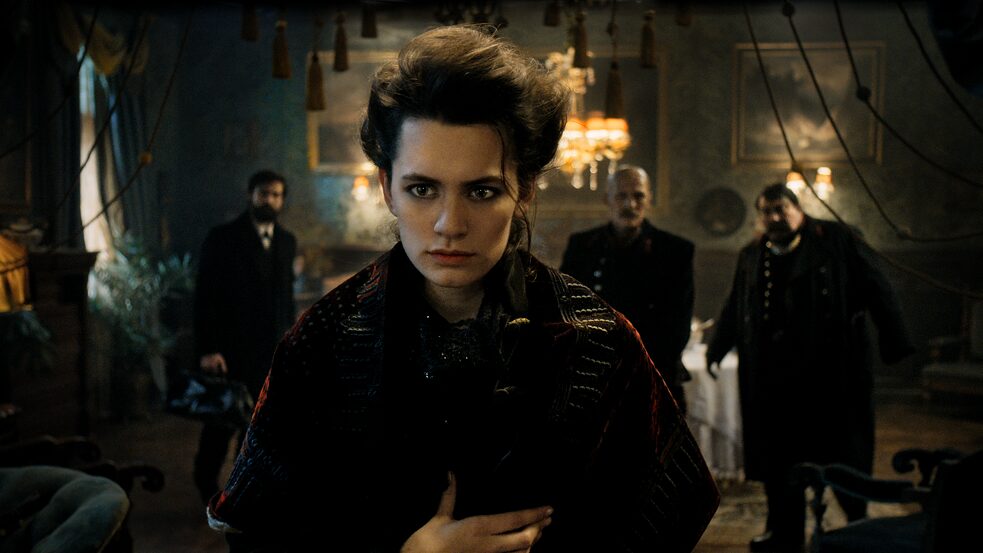 Promo Still from the Netflix series FREUD: Ella Rumpf spielt das myteriöse Medium Fleur Salomé | © Netflix And then there’s Swiss actress Ella Rumpf as Fleur, the psychic femme fatale. Rumpf’s screen presence almost feels too dramatic for realism; previously she was acclaimed by German critics for her performance as a baseball bat–wielding vigilante, a kind of punk rock superheroine, in Tiger Girl (2017), a movie well worth seeking out on Amazon Prime. Freud gives her a worthy follow-up role. Looking like a Goth icon straight out of a 1980s music video, Fleur is initially a timorous young woman in thrall to the evil Hungarian conspirators. Yet as she realizes that her psychic powers are a virtual weapon of mass destruction, Fleur discovers she has a devil inside. Rumpf makes her transformation so compelling that the special effects are almost superfluous. Is it too much to hope for a spin-off starring this character?

In India and Germany: