Welcome to Bike City: in Bremen one in four routes travelled are by bike. | Photo (detail): © picture alliance / Bildagentur-online/Schoening

The Hanseatic city of Bremen is high on the list of bike-friendly cities around the world, ranking above even Bogotá and Tokyo. But how do you go about turning a car city into a bike city? Michael Glotz-Richter from Bremen’s municipal authority reveals all. 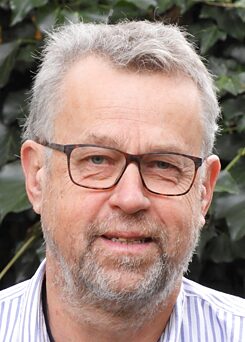 As future-proof mobility spokesman for Bremen’s municipal authority, Michael Glotz-Richter has been campaigning for the city to become more bike-friendly since 1996. | Photo (detail): © Glotz-Richter/Stadt Bremen Mr Glotz-Richter, Bremen has implemented various measures to make traffic more cycle-friendly over the past few years. Has the strategy been successful?

In Bremen lots of people use a bicycle to get around – regardless of whether they are men or women, poor or rich, students or bank directors. One in four routes travelled are by bike, with the figure rising even further in the city centre. However this isn’t new: the city has always had a bicycle culture, which meant that the infrastructure has always been more suitable than in other cities. It’s similar to the nearby Netherlands, where cycling’s completely the norm.

How does Bremen fare by international comparison?

Bremen is in 11th place in the international Copenhagenize Index, which ranks cities by bike-friendliness. The top places are occupied by Copenhagen and Amsterdam, and France is also ahead of the German cities with Strasbourg, Bordeaux and Paris. The leaders are all European cities – but Bogotá comes directly after Bremen, closely followed by Tokyo.

How does this bike-friendliness influence the city’s character?

There are now plenty of cycle lanes across the entire city centre. Although cars are allowed to drive on them, cyclists take priority. And specific new rules apply, for example the fact that you’re explicitly allowed to ride two abreast. Car drivers just have to adjust to the new speed. But it isn’t about creating a political polarisation between car lovers and haters – it’s simply a different approach to handling things, in which the car doesn’t automatically have right of way.

Specific rules apply to cycle lanes: riding two abreast is explicitly permitted. | Photo (detail): © Glotz-Richter/Stadt Bremen What needs to be taken into account when you “convert” a city like this?

There are indeed several things that need to be taken into consideration. Starting with providing enough cycle parking areas; the Bremen bike racks, to which bikes can be locked securely, have proved ideal for this. We’ve replaced cobbles with tarmac for a safer riding surface. We also had to plan crossings for tram routes – which is very complicated in terms of administration, but it’s worth it. Car-sharing from mobility points has been in place for almost 20 years, and that’s also very important as an alternative to car ownership. Furthermore we have several air stations, charging points for e-bikes and even a bike repair café. Germany’s first bike zone was created in Bremen in 2020. All this makes our city bike-friendly, but of course there are plenty more things to do here in Bremen as well.

You’ve been working on making the bicycle the most important means of transport for decades. Why?

Your own car shouldn’t be central anymore – it’s that simple. It’s about climate change and space, but it’s much more than that too. Cars are getting bigger all the time, and they clog up the streets when they park in the cities. At the same time many children no longer play outdoors: there’s barely any space, plus there are traffic hazards. If you use a bike for your regular journeys, it saves time and money. There’s less congestion for everyone. People tend to buy things from the shop around the corner rather than go to a shopping centre, so they’re supporting local traders too. And moving around is just healthy and relaxing, most people don’t do enough of it anyway. The more bike-friendly a city is, the less you need a car of your own.

So is everyone on board with this, or is there resistance as well?

Of course we’re not “everybody’s darling”. Cars are emotionally highly charged in Germany, and therefore many cities dare not to broach the subject. Essentially we’re overturning a paradigm – in contrast to before we’re giving priority to cycles, and that breaks down old privileges. We want the statement “I’m here as a guest in my car” to hold true. Until now it’s usually been exactly the other way around. The most important thing is to have the courage to put these ideas into practice. After all, a lot goes on in people’s heads. There are certain overriding preconceptions of what mobility should be like. We want to distance ourselves from the image mobility had between the 1960s and 1980s and move towards a concept of sustainability for 2030.

Where do you start with that?

Infrastructure and mobility culture always have something to do with attitudes. And they don’t change overnight. People smoke everywhere in old films as if it was quite normal – today you can barely imagine that. These days, cars are always present in films. When we look at the drama Tatort (i.e. scene of the crime) in 20 years’ time, maybe we’ll shake our heads at the role played by cars in it. One way of improving the image of cycling in this country for instance would be to have the inspectors conducting their investigations on a bike, or using a car share. I’ve already mooted this idea for our Tatort police commissioner here in Bremen, but unfortunately it’s a tough nut to crack. It should be normal for James Bond to ride a bike – that would establish a basis for a future-proof mobility culture.

Bremen is far ahead – what’s it like in the rest of Germany?

There’s lots happening across the whole country, in cities as well as smaller towns. Berlin already has pop-up cycle lanes, Stuttgart is also trying hard – and they need to if they want to improve air quality. The more bikes there are, the less congestion.

How would you advise other cities to approach this?

Look for role models at a global level. Be bold. Less talk, more action. Exchange ideas with others. Stand your ground, don’t be waylaid by conflict – the truth is that changes of this kind rarely happen without a fuss.

In Bremen there are two bike districts: an area of older buildings on the edge of the city centre known as Alte Neustadt, as well as a new estate located further towards the outskirts, Ellener Hof. Both neighbourhoods are designed to be bike-friendly. In the Alte Neustadt district, 12 streets totalling around 2.5 kilometres in length became Germany’s first bicycle zone in July 2020.

Bremen is also working on a network of “premium cycle routes” that link the districts together. Cycle routes complement the road network in the suburban districts, and there are places to park bikes everywhere. New build plans must include cycle storage facilities too. Another aspect to this strategy as an alternative to car ownership is car-sharing. Of the approx. 20,000 car-sharers in Bremen, more than 6,000 of them have given up their cars or not bought one in the first place – which removes around 30 km of parked cars from Bremen’s streets.