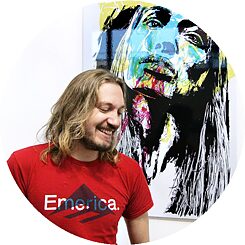 Jan Feindt was born in 1975 in Lüneburg, Germany. He studied illustration under Yirmi Pinkus in Tel Aviv and in Hamburg. Since 2001, Feindt has been living and working as a freelance illustrator in Berlin. Together with the investigative journalist David Schraven, he was awarded the Deutscher Reporterpreis (German Reporter Prize) for ‘Weisse Wölfe,’ his reportage about the Neo-Nazi scene in Dortmund, Germany. Feindt’s work for the book ‘Cargo: Comic Journalism Israel–Germany’ in 2005 marked his debut in the area of comics journalism.

For me, the difference between travel photography and travel drawing is...
"... that drawings can be reproduced later from memory."

I would like to travel...
"... to Bardowick in Germany to document rural life."

My reading for my next trip will include...
"... Henry Miller’s Sexus."