Piesteritz Garden City
Always ahead of Its Time

The bathtub takes up almost half the bathroom in the Wippers’ home. The sun shines through the window of the small room, casting everything in bright, white light. “A bathtub of this size is quite standard today,” Rosemarie Wipper, currently giving us a tour of her terraced house, says. She has lived here with her husband Klaus since 1997. “But back then, a bathtub like this was a real sensation.” 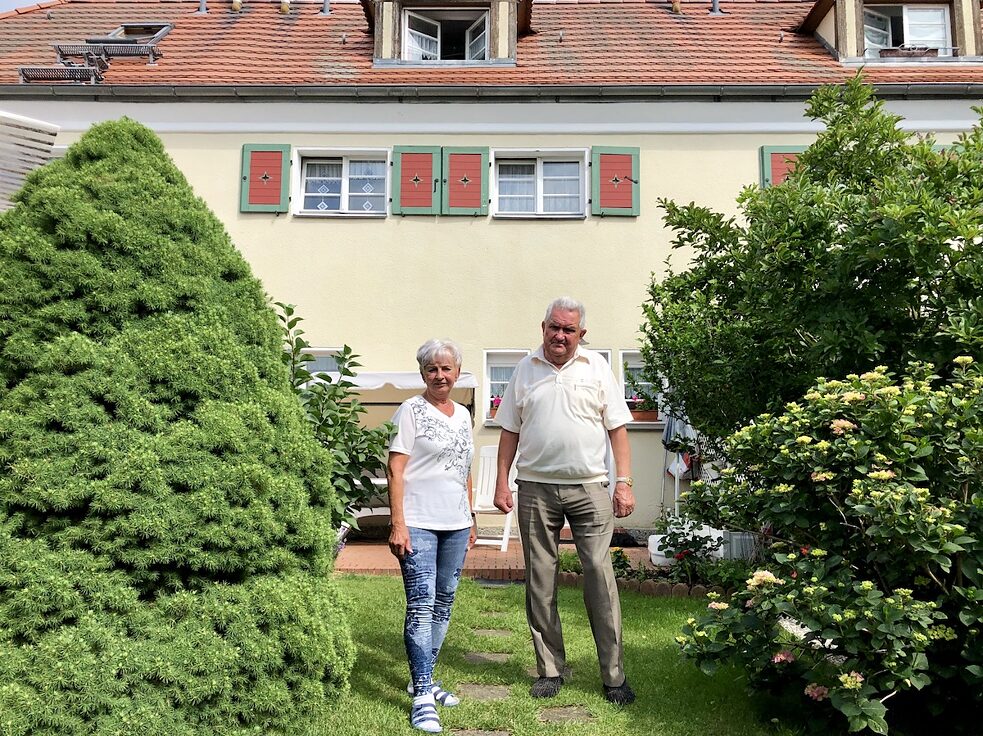 What the future holds is a hotly discussed topic around the Wippers’ coffee table.  The living room on the ground floor of the terraced house is narrow, but comfortably furnished. Neighbour Reinhardt Mörbt, an informal authority on the estate, has taken his seat at the table. “A hundred years ago, a house like this was an incredible luxury,” Mörbt says. “The factory workers who moved in here had only known outhouses. You had to walk across the yard to use the toilet.” Indoor plumbing, a tub, electricity, and a garden, “was all very modern and extremely desirable.” 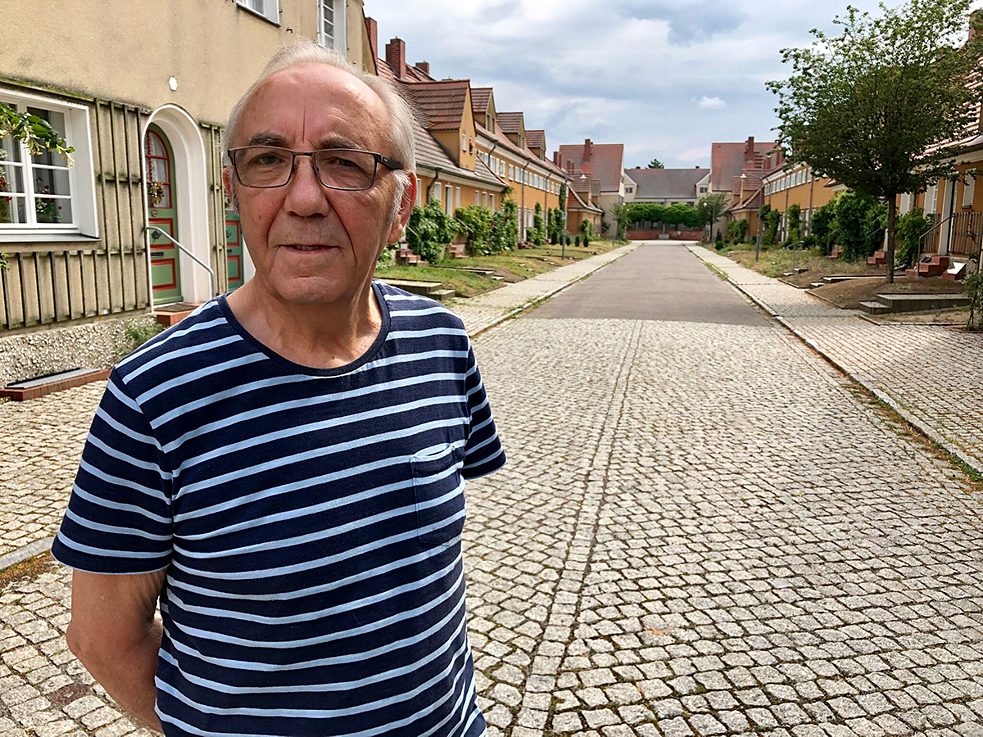 Reinhardt Mörbt is also a long-time resident of the former factory estate. | Photo: © Julius Lukas How such a revolutionary housing estate came to be built in the small village of Piesteritz goes back to the history of the nitrogen plant, which opened its doors during the First World War. A British naval blockade had cut off the Germans’ supply line to nitrogenous saltpetre from Chile, so a plant had to be built to produce the raw material so essential for weapons. In 1915, the Reich Nitrogen Plant went up practically overnight, built in Piesteritz in just nine months. The new factory needed workers to keep it humming. “They came from all over Germany,” Klaus Wipper says. Staff was initially housed in barracks, but “they wanted to keep the workers, and their families, here. That is why the Garden City was built.”

A Haven from the Modern World

Our coffee cups are empty, so Reinhardt Mörbt takes us on a guided tour of the factory estate. Just stepping out the front door reveals what makes the estate so special to this day: streets devoid of cars show off the town’s architectural refinements to their best advantage. The play of colours on the facades and shutters, the fine carvings on the doors: “Salvisberg planned every detail precisely,” Mörbt says. He brushes a few rose petals off a façade to reveal a shutter dog topped with the bust of a woman. “The architect attached importance to such small details.” 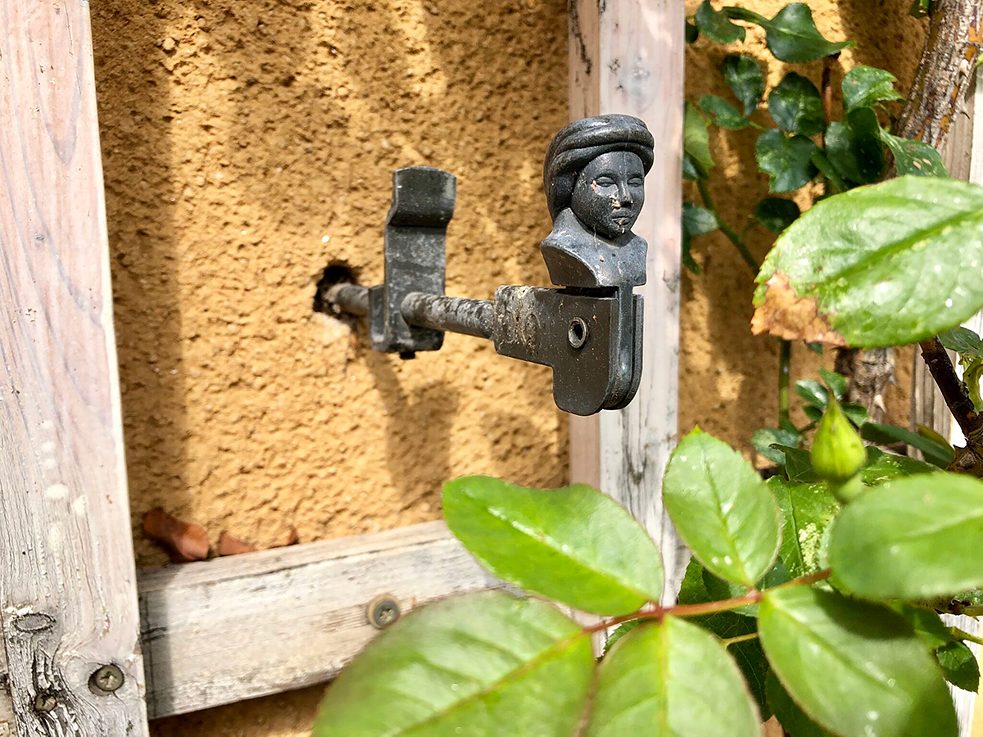 Mörbt stops in front of a wide square in front of a stately house. “The head of the plant lived here,” the 76-year-old says. Who got which house was very clearly defined on the estate. Line workers were assigned the smallest units, masters lived in 100 square metres and directors inhabited stately manors of 160 square metres. “While the differences in housing were considerable,” Mörbt says, “just having everyone living on the same estate was unusual.”

The Garden City is still a unique microcosm today. A glimpse beyond the terraced houses over the well-tended garden plots shows what lies beyond the estate. A man picking ripe tomatoes in a green garden is silhouetted against a backdrop of smokestacks billowing white smoke into the air on the horizon. Silvery pipes sparkle in the sun: the nitrogen plant. On a leisurely stroll through the settlement, it is easy to forget just how close it is.

Today, only a few Garden City residents still work at the plant. The agrochemical park, which includes nitrogen production facilities, has around 1,500 employees. At its peak, almost 9,000 people passed through the factory gates every day and shift changes resembled great migrations. Back then in the 1970s and 1980s, fertilizers and not explosives were in demand. Piesteritz supplied the farms in the GDR, so production had to be ramped up to full capacity with serious negative consequences for the Garden City.
“Once the sun set in the evening, all the dust that had collected over the day was expelled out into the air,” Wipper says.  “If your laundry was still hanging out, you’d have to wash it again,” his wife adds. The spewing stacks were choking the Garden City. “The houses were covered with layers of grey,” Rosemarie Wipper recalls, their play of colours hidden beneath a dark patina. “We still enjoyed living here,” Wipper says, “even though you always had to rinse the fruit and vegetables out of the garden.”

In 1986, the Garden City was listed as a protected landmark, though German reunification four years later threw a bit of spanner into the works. Like the plant, which stopped almost all production, the estate also found itself in need of an investor. It was another four years before Bayernwerk AG, a Bavarian energy company, agreed to purchase the historic estate. The new owner invested 80 million German marks in renovating the 363 houses. It also helped that the company housing estate was showcased at the Expo 2000 in Hanover.  “This drew a lot of attention and increased the pressure to renovate the houses in keeping with the original design,” Mörbt says.

In 1997, the residents built a playground. “It was a community project and everyone came together to help out,” Klaus Wipper recalls.  The playground went up in just one weekend. Today, however, it has gone to seed with grass growing out of the sandpit. “Everyone is doing their own thing now; the sense of community is gone,” Wipper says.

Nevertheless, the Wippers and Mörbt agree that this architectural gem is still a good place to live. But cracks are showing in the foundations, and not just at the playground.  “The last owner didn’t do a lot of upkeep”, Mörbt reports, adding that there is a lot of catching up to do. But there is hope: “Apparently the new owner has already sent some workmen out to make repairs,” Rosemarie Wipper says. She is confident that the quarter will retain its character and hopes that the 100-year-old community can one day look back on an at least 200-year history.