Voting at 16
“It would rejuvenate our political culture”

“We’ll soon be voting you professionals out”: a secondary school student carries a sign at a Fridays for the Future demonstration | Photo (detail): © Oliver Auster/ picture alliance/dpa

The image of the moody teenager who thinks politics is just boring is outdated. The Fridays for Future movement has shown how enthusiastic young people can be about democratic processes and political issues. It would seem then, that an overhaul of the voting laws is long overdue.

In 11 of the 16 German states, 16 and 17-year-olds can already cast their votes in local elections. And at the federal level too, more and more voices are calling for lowering the voting age. Leader of the Linke Party, Katja Kipping, credits the Fridays for Future movement for getting the ball rolling and showing the world that the younger generation is interested in helping shape politics. 17-year-old Asuka Kähler has been working for sustainability and diversity and against racism as part of Fridays for Future since 2019. 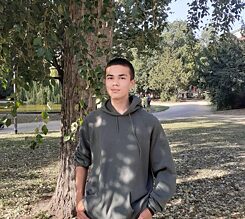 17-year-old Asuka Kähler is finishing his Abitur (similar to GCSEs) this year. He has been involved in politics for 1.5 years. Since starting in the local Frankfurt chapter of Fridays for the Future, he is now active nationally and is one of the few people of colour in the movement. | Photo (detail): © Asuka Kähler Mr Kähler, the political commitment of Fridays for Future has also reignited the debate about lowering the voting age to 16. According to politicians, the movement has shown how active and interested young people are in politics. Do you see this as a positive development?

I think that we can certainly chalk it up as a success. We have helped highlight the issue of voting rights in the public eye and made changes more likely. I would, though, like to clearly separate this issue from our actual objectives. The right to vote starting at 16 would be good, but it is not the first priority in achieving our goals.

In July, representatives of Fridays for Future joined forces with “Mehr Demokratie” (More Democracy) in their efforts to lower the voting age. Aren’t you itching to increase your influence as a movement and make voting rights from the age of 16 a central tenet of your platform?

We could take it on board more, but I don’t see it as urgent. I don’t believe that the votes and positive effects gained would be relevant enough to our goals to make it worthwhile for us to invest a great deal of energy here.

To what extent would a voting age of 16 change the political culture?

I think it would rejuvenate our political culture in the long run. The right to vote at 16 would encourage young people to talk more about politics and also increase in their political awareness and interest in politics. It could also lead to a greater involvement in political discourse, whether inside parties or non-governmental organizations.

CDU MP Peter Preuß argues that legislators defined 18 as the age of majority for a reason. “It is about protecting adolescents from undue influence. We shouldn’t be confronting young people with decisions they are not mature enough to make.” What are your thoughts?

I think this argument has a few holes. In general, his point about undue influence is valid. Younger people are in fact more susceptible to the influence of others, though I don’t want to overgeneralize. But if this is your reasoning, then you also have to consider an upper age limit on the right to vote. Brain capacity begins declining as of a certain age, so it might also seem reasonable to take away the right to vote when people turn say 80, since they might be too susceptible to undue influence. If you are going to apply the logic at the one end of the spectrum, you need to do the same at the other. And I don’t think the lack of maturity argument really holds water either. Any young person who wants to get a general school leaving certificate and go into vocational training has to make important decisions that may impact the rest of their lives well before they turn 18. So I don’t entirely understand why voting at age 18 is seen as sacrosanct. There have been changes in the minimum age in other areas, like in getting a driving license and the age of criminal responsibility.

Critics say schools are not sufficiently preparing young people for active political participation. Do you agree?

That is an important point. There is an urgent need to address political issues more intensively in schools. As it now stands, the content of lessons has rarely been tied to current political events, and the focus is primarily on theory and political systems instead. And our education system needs to start addressing these issues earlier too. In a digitalized society, young people form political opinions early, consciously or subconsciously, precisely because there is always some kind of outside influence. So schools need to step up and teach political literacy.

One day, two elections and two age limits: On September 1, 2019, state elections were held in the neighboring states of Brandenburg and Saxony. The difference: 16 and 17-year-olds were allowed to go to the polls in Brandenburg, but not in Saxony. On behalf of the Otto Brenner Foundation, political scientists Arndt Leininger and Thorsten Faas of the Freie Universität Berlin examined how the different voting ages affected young people and their political attitudes. Immediately after the elections in September 2019, they surveyed around 7,000 young people between the ages of 15 and 24 online about their basic political attitudes, their living and school situations, and how they communicated and accessed information.
The researchers concluded that there was little to be said against lowering the voting age. Their findings contradicted critics’ main argument – that young people do not have the necessary maturity for political participation. “In our study, we found that even 15-year-olds have a fairly pronounced interest in and knowledge of politics – regardless of the valid electoral law in the two federal states studied,” Faas said. The study also concluded that an argument frequently put forward by proponents of lowering the voting age, namely that a change in the law would encourage young people to be better informed, was not true either. According to the study, their basic political attitudes were “at a very similar level to those of older young people,” regardless of the voting rights laws in the two states.