The changes to how we live and work during the coronavirus pandemic have put pressure on everyone. But traditional role patterns mean women have been particularly hard hit. In an interview, the specialist in psychiatry and psychotherapy Sabine Köhler talks about how women can protect themselves.

The lockdown since the start of the coronavirus pandemic has meant working and going to school from home. Suddenly families have been forced to spend entire days and weeks together in close spaces. If the German media is to be believed, the pandemic has catapulted us back into the gender roles of the 1950s. Apparently the job of family manager still falls mostly to women, meaning many are now working a full-time job and caring for a husband and children around the clock on top of that. In the worst case, a household may also include people in need of care. The impact of this double and sometimes triple burden can be expressed as depression, psychosomatic pain and other symptoms of stress. In an interview, the specialist in psychiatry and psychotherapy Dr Sabine Köhler talks about how women can take care of themselves. 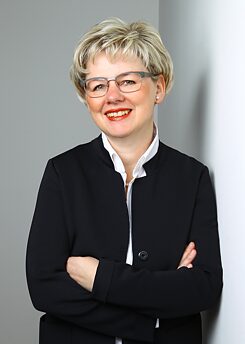 Dr. Sabine Köhler is a specialist in psychiatry and psychotherapy and Chair of the Professional Association of German Neurologists (BVDN). | Photo (detail): © privat Sabine Köhler, the coronavirus crisis has brought huge challenges for us all. Studies have shown that women are particularly hard hit. Do you agree?

My daily experience with patients has shown that the extra stress is really impacting women. Home-schooling children usually falls to women, something they have to do in addition to working from home themselves. It has rolled back a lot of the good progress made over recent years. Traditional gender roles are making a comeback, which is hard on a lot of people. The fact that people are crowded into confined spaces is just making it worse.

Ultimately all that impacts men too. Are they suffering less?

This situation is stressful for men too, of course. But they can distance themselves better than women who feel responsible for caring for the entire family. Though the work is naturally distributed more evenly now in relationships in which there was an equal division of roles before the pandemic.

Does education play a role in how work is distributed?

Germany is a fairly academized country. But social equality quickly comes to an end after graduation, with women earning an average of nine percent less than men. And as soon as they have children, they earn 28 percent less. Those are significant numbers – and the coronavirus is acting like a social pressure cooker.

What signs of increased psychic stress are you seeing in your patients?

It runs the gamut. Fear of the future, fear of failure and depression are particularly frequent and currently on the rise. But psychosomatic disorders, back and shoulder pain, and stomach and intestinal problems are there too – and we are also seeing a clear increase in such symptoms. And people who were already ill before the pandemic are now more likely to seek a doctor’s care again than before.

Who is most frequently affected?

It’s important to remember that the crisis is extreme for everyone. We are all wondering if we will survive. But there are two groups that are particularly susceptible to a mental breakdown: First, the 25 to 45-year-olds who are living with the double burden of family and work and were already under extreme stress. Then there are the people, especially women, who are nearing retirement age. Many currently feel completely overwhelmed by how the working world has changed with many people working from home and the new technical challenges this involves. And at that age, they are often caring for their own parents – althoughugh it’s usually clear who takes this on: the women.

What about those who are disadvantaged even without a global crisis, such as single parents or people with a migration background?

Single parents are at a particular disadvantage anyway because they carry all the burdens alone and can’t share the work. The coronavirus often plays less of a role with my female patients with a migration background in light of the other problems they face. But the children are at an extreme disadvantage. They need advocates during this time; as a society, we have a huge responsibility here.

What can we expect: Will people come out of this extreme experience stronger or will they fall apart as soon as the danger has passed to some extent?

That will vary from individual to individual. Some are recognising their strength now, while others are overwhelmed. Studies have shown that more caregivers fall ill once a situation like this has passed. Metastudies of previous pandemics have generally shown an increase in mental illness in response to the acute threat: “Will I die? Will I survive?” The economic consequences of the lockdown are already visible, pubs are closing, the middle class is suffering. This is associated with a whole host of social problems, and these are in turn closely linked to mental illness. We are already seeing an increase in illnesses. We are seeing more patients and some of them are sicker because many have experienced terrible things, lost relatives they were not able to say goodbye to properly, or are permanently traumatized as system-relevant helpers.

Even without a pandemic, women are “system relevant”, not least for the family system. What advice do you have for getting through these difficult times?

I advise every woman not to lose sight of herself. The system view of the woman in the family is great, her ability to multitask, and she should not give that up. But women should definitely take time to recharge their own batteries, take time for self-care, to be alone at home for a while, to go for a walk, to meet with a friend – and fight for these time-outs if need be. We are doing a tremendous contribution and have the right to take breaks. And there should be compensation for all the work being done, including unpaid work.

Mental Health in the Crisis

For the “Mental Health in the Crisis” study, the pronova BKK company health insurance fund conducted an online survey of 154 psychiatrists and psychotherapists in practices and clinics in Germany in October and November 2020. The central finding was that women and families with children in the household were particularly affected by the restrictions and stressors brought by the coronavirus pandemic. Four-fifths of the physicians polled reported that psychological symptoms in this group had increased in 2020. Single parents were especially susceptible to greater mental stress during the crisis.

Of the experts surveyed, 86 percent observed an increase in psychological symptoms among women, while only 70 percent noticed the same among men. Among families with children, 84 percent of psychiatrists and psychotherapists reported increased psychological problems. For families without children, the figure is only 49 percent, while for single parents it is as high as 92 percent.