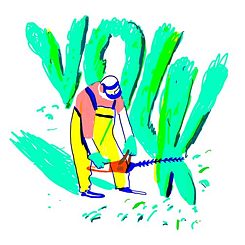 graphicrecording.cool Are the people (or at least a not inconsiderable part of them) simply too stupid? Or - and this seems to me rather be the case – have the world and political contexts become so accelerated, so complex and so confusing that most people, who after all only want to get a grip on their lives (and in this already often reach their limits), are hopelessly overwhelmed? Weren’t the expectations raised by politics so high that they could only lead to disappointment and frustration? And finally: doesn’t a generation that grew up in peace and never had to fight for its freedom lack the experiences of where populism leads and of suffering and war, so that it can’t really imagine the worst and can’t see the danger posed by populist politics?

Painful - and absolutely necessary - is that Yvonne questions things taken for granted by reminding us that the populism debate we’re having here is profoundly Western, still quite unthinkingly assuming that the West is the model for the world. Such an attitude dismisses the experience gained in other parts of the world as irrelevant or at best of secondary importance. But what would change in our assessment if we didn’t consider liberal democracy but rather populism as the norm, if we didn’t consider the West but the rest of the world as the norm? What if the Western conception of the rational, self-determined individual was really a very strenuous form of existence, not at all desired by many and not realizable for many? Then the attractiveness of populism would consist in its being closer to the nature of man, because it corresponds more to the “inner desire” for leadership, as Yvonne puts it.

Foto: Herbert Rohrer, Wildbild I would like to take up a third and last point from Yvonne's text. Scattered passages there make statements about the causes that lead to populism: the mendacity of the West, which betrays its ideals, the “inner desire to have a caudillo as sovereign”, “pent-up pressure,” particularly in the face of a censoring political correctness that forbids us to say what we feel, and finally the “most abiding of our fears as humans, the fear of the other”.