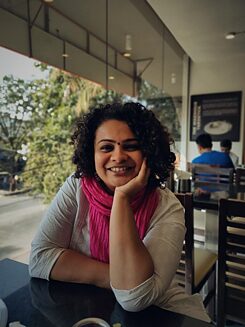 © Shruti Rao Shruti Rao is a Bangalore-based researcher, artist, filmmaker and arts manager with keen interest in film, new media and culture studies. She was a media professional in Mumbai for over a decade, operating in a diverse range of contents and formats, including commercials, feature films, business news, travel & music shows for lifestyle channels and in both fiction and non-fiction digital content production for platforms like YouTube and Amazon Prime India. Aside from a decade as a media professional in Mumbai, Shruti has worked as a producer and production manager at Sandbox Collective, a Bangalore based performing arts collective and more recently has been curating and programming the digital events for the Museum of Art and Photography, Bangalore (MAP).

Shruti graduated from Srishti School of Art Design and Technology, Bangalore with a Masters in Knowledge Systems and Practices. Her graduating project ‘Okay Smile Please’ was a 50-minute non-fiction audio documentary, created in the vein of her interest in film and media studies. The audio documentary was on the child artists' industry in the advertising sector in Mumbai. This audio documentary has since been  exhibited in the form of a collective listening session at the Social Communications Media Department, Sophia College, Bombay, and at Gallery Onkaf, Delhi.

She also participated in ‘The Amplified Voice' workshop by Laura Wright, supported by the Kochi Biennale Foundation and American Arts Incubator at Pepper House Kochi which resulted in a collaborative interactive sound installation titled ‘The Secret Bag’, a moving sound exhibition, to highlight the temporary nature of homes of the members of the transgender community in Kochi. It was taken to public spaces in Kochi and exhibited at Pepper House at the end of the workshop. 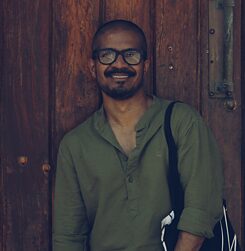 Abhishek has worked in multiple faculties across mainstream media for over two decades. He has experience working in Media production houses, Advertising agencies and multiple Television channels, with work ranging from Documentary films, Fiction shows, Feature-length films to experimental Music Videos and Visual content. He has Produced, Creative-directed and Directed commercials, web-content, mini-docs, featurettes, brand campaigns and editorials; written screenplays for film, television and web; authored books – his book ‘Ikiryo’ is currently under production towards being developed as an OTT show – and has created a body of work for various brands including Amazon, Kappa, Ogilvy and Mather, Channel [V], Discovery Channel, Marks & Spencer and the Savoy Fairmont, among others.

In recent years, Abhishek's artistic influences and efforts have organically shifted towards creating smaller, independent works through photography and illustration – spanning different cultures found within microcosms around the world. Abhishek is currently based in Bangalore city.

Note on the project
Shruti and Abhishek’s area of artistic and research interest is focused on the intersection of intimacy and internet-enabled technologies (mainly dating apps). The project broadly explores the changing landscape of romance and digital intimacy in Bangalore and Munich as a cultural and sociological phenomenon, examining the surge in usage of dating apps during the pandemic and the changing trends in how individuals from diverse backgrounds engage with these apps. This non-fiction audio narrative work will be carried out as a 'two-sister-cities' project, spanning Bangalore and Munich, in collaboration with their host Experimental Radio, Munich.

© Shruti Rao & Abhishek Bommana Shruti and Abhishek are currently looking for volunteers based in Bangalore / Munich for LEFT SWIPE LEFT - a podcast project on the App-Dating culture during the Pandemic.
If you are interested in sharing your stories and experiences get in touch with them on leftswipeleft@gmail.com or call/whatsapp them directly on 9619105088/9987288438 or just shoot them a dm on instagram @abhishekbommana or @mumbaimohattarma.

The bangaloREsidency-Expanded@Experimental Radio is made possible with the support of the Department of Arts and Culture and the Cultural Department of the City of Munich.