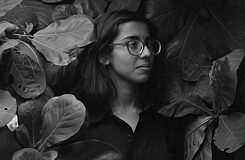 © Anisha Baid Anisha Baid is an artist and writer from Kolkata, India. Her practice and research involve an investigation of pervasive technologies through an examination of their design, diversity of use, and their relationship with ideas from science fiction. She works with found and archival material – often sourced from the internet to construct narratives that move between fiction and documentary. Having grown up on the personal computer, her inquiry is focused on the interface as the medium for human-computer interaction. Her work attempts to poke at the flat-scapes of the computer screen to decode computer labour through the interface - a technological tool that has converted most spaces of work into image space.

Most recently, she has been researching and working with Text-to-Speech and machine generated voices, investigating the phenomenon of talking computers. She is also invested in understanding digital image cultures through the lens of photography and works extensively with appropriated stock images and commercial imagery.

Anisha studied media art at Srishti Institute of Art, Design and Technology in Bangalore and has been working in the editorial team at PIX Quarterly, a journal of South Asian photography.

Anisha's Mind Over Matter* project will investigate the intimate and embodied relationship between her and her personal computer through multiple immersions into the interface. Conceived as a set of performative experiments with the digital world, the video work will explore the poetic dimensions of computer space, ideas of depth and surface on the screen and its implications on the users' psyche.

*Mind Over Matter, a virtual residency under the banner of Digital bangaloREsidency-Expanded, is a collaboration between the Goethe-Institut / Max Mueller Bhavan Bangalore, Walkin Studios Bangalore and Netzwerk Medien Kunst // C. Rockefeller Center for the Contemporary Arts, Dresden, Germany. The projects of the participating artists will be presented at the Museum Technische Sammlungen in Dresden, Germany as part of an international media art exhibition in November 2020.