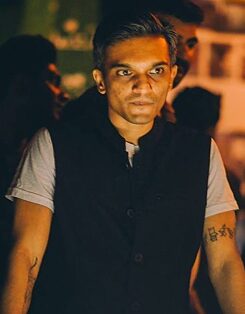 © Naveen Mahantesh Naveen Mahantesh’s practice lies at the intersection of art, architecture and the city. He is involved in creative research with a love for urban life and everyday phenomena. His past projects include working with teams of artists, philosophers and curators in generating projects about built forms, human settlements and the public realm, while considering the city as a studio. His projects provide alternate perspectives for banal routines, take inspiration from urban myths, and engage within the ecologies that the city thrives upon.

His recent curatorial projects include an exhibition about speculative-urbanism called 'Could be urbanism | शायद शहरी है’ at KHOJ-International Artists Association, New Delhi (2018) and 'Backstage of Biology’ - on the institutional archives of NCBS-Bangalore (2019). Naveen has been the City as Studio Fellow at Sarai (2013) and a recipient of INLAKS-ISCP Curatorial Fellowship in Brooklyn, New York City (2015). His propositions have been part of the Sarai Reader Exhibition '09 and INSERT-curated by Raqs Media Collective, Mediating Modernities at Srishti School of Design, FOA-FLUX-art|life|Technology Symposium at Swissnex, among other platforms. Naveen was one of the curators for the Students' Biennale Kochi (2016) and has received project grants from various institutions like KHOJ-International Artists Association and India Foundation for the Arts.

He is a critic for architectural design at design schools and the principal architect of Bangalore-based design firm Cresarc Studio.

He is currently interested in the impact of a global pandemic on urban environments. His residency project, Schroedinger’s Urbanism, will look at the urbanism of a pandemic through the lens of ‘Architecture as witness’ and, as an extension of it, ‘City as witness’. Berlin will be the site for this research and study during his residency at ZK/U.