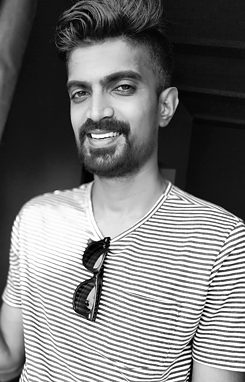 ©Nithin Sadhu Nithin Sadhu is an experimental artist from Bangalore, India. He primarily works with tapes of all kinds to create portraits and designs which are visually aesthetic and intriguing. He constantly identifies himself with new forms of expression, either through tape or exploring new possible mediums, like creating art by shadow casting. He has had his works displayed at art events, restaurants and commercial events across India and has been greeted with fervent appreciation and curiosity. He plans to continue on the same lines, exploring and expressing himself through the most mundane of materials as a medium.

He has worked as a Sound Engineer and used to play the guitar for a band. This has helped him mould his artistic ideas and build on them. He has also completed his Diploma in Interior Design.

At Lichtenberg Studios, Berlin, he will explore the urban living and the spatial culture of the place. In essence, how people emote to art and each other in a public space and how this dictates the way we define ourselves as humans.