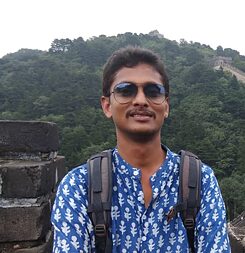 © Parthasarathi S Parthasarathi S (Partha) is a graduate of science who began his career in theatre in 2007. He started as an actor, working under directors of fame, and began lighting plays and managing stage production and logistics from 2010 onwards. He has since worked on stage light design and execution for directors such as Surendranath S., Abhishek Majumdar, Mohit Takalkar, Neel Sengupta, and has co-ordinated projects for organisations like the Goethe-Institut, Swissnex, Pro Helvetia, Bhoomija and Attakkalari. For the last five years, he has worked with Ranga Shankara in various capacities.

Having worked mainly with Indian directors, and predominantly in Bangalore, he will be expanding the horizons of his understanding of the craft of stage design at the Schauburg, Munich. He will be assisting Andrea Gronemeyer and Mareile Krettek in their new production for children “Der Zinnsoldat und die Papiertänzerin” (The Tin Soldier and The Paper Dancer) that will premiere on April 19, 2020, as well as helping in the planning and execution of the Schauburg Theatre Festival, and making their existing shows more adaptable to tour.