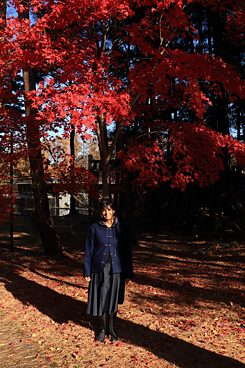 ©Mickaël Gameo, Aomori Contemporary Arts Centre Rakhi Peswani finished her Master’s degree in Ceramic Sculpture (2003) and Bachelor’s degree in Painting (2000) from Faculty of Fine Arts, M.S.University, Baroda, Gujarat. She has held solo exhibitions in Mumbai (2006, 2007, 2013, 2018), Delhi ( 2009, 2015), and Hong Kong (2011), and has participated in various group and museum exhibitions in India and abroad. She has worked as guest faculty at Sarojini Naidu School of Arts and Communication, University of Hyderabad, Hyderabad (2004 – 2012), full time faculty at Srishti School of Arts and Design, Bangalore (2012-14), and as visiting Associate Professor at School of Culture and Creative Expression at Ambedkar University, Delhi (2016-2017). Currently she is a visiting faculty at Srishti School of Art Design and Technology.

She has held continuous interest in the relationship between the human body, its capacity to sustain repetitive techniques and its ability to acquire skills and language. Her work contemplates craft from an action to a state within continuity, an expansive and evolving language, grounded in an ever‐changing site, the human body.
She is currently living in Bangalore and divides her time between her artistic practice and higher education arts teaching.

At Westwerk, Hamburg, she will be working on finding meanings in materiality; over the month, she will be developing her ongoing interest in materials that can provide cerebral and sensory, past and present simultaneity to better understand the complex worlds we inhabit.

Rakhi Peswani @ Westwerk (Oct - Nov 2019)
Westwerk, an artists’ run initiative located in the heart of Hamburg, is housed in a beautiful old building with old staircases. Its location and easy going atmosphere makes it very conducive to creative process and artistic thinking.

It is situated close to various museums and galleries, book stores, eateries and pubs, the harbor, various significant architectural sites (churches and the Rathaus), Alster lakes and various canals and ducts. As a resident at Westwerk and its location, I could easily feel I was experiencing a slice of both old and new Hamburg. Westwerk's building is an approximately 150 year old structure with beautiful Oakwood floors and ceilings, a strong stable architecture that breathes in the night. During certain hours of the day, my bedroom windows, overlooking a beautiful canal, brought refracted sun-glimmer of gentle water inside the room ceiling. I was told that the building housed a paper mill in the last century and later, during 1980s became an active squatting space for artists. Informal and congenial, today it functions as artists’ studios, a non-commercial gallery, music theatre, with an informal bar, a recording space as well as living quarters and offices.

The stream of incoming artists and musicians during my six weeks there, brought a buzz of varying languages. While working in my studio apartment, I could hear evenings and nights of musical practices, band performances and various opening events extending after midnights. These were rather energizing and exhilarating. The studio space was modest, not elaborate and perhaps needed a few more pieces of work furniture. But coming from a context of modest means, I was able to generate productivity during the short span of time there.
Westwerk has an interesting gallery space maintained and run by the artists themselves. Every exhibition/event is planned with a contact person from Westwerk and the person takes onus of the event concerned.

My host, Anja Ellenberger was an absolutely warm and delightful person who is a curator with Westwerk. She brought a lot of positivity and direction towards my residency. Perpetually ready with ample local information, she provided detailed introductions to the city, almost becoming my personal local guide/ guardian/ pub buddy, and a great company for varying conversations. While navigating the cultural landscape of Hamburg, she was most helpful; accompanying me to specific areas for purchasing work materials, various museums in the city, providing free entry to band performances, museums, as well as a couple of personalised guided tours too!! Her patience, generosity and involvement contributed to a memorable stay there.

Incisions, Inflections Aberrations
Regarding my work, being in a Post-industrial port city, I was looking for some markers in Hamburg that stood for its older modern times to create some connecting time-links to our context here in Bangalore, right now.

The fact that sometimes art, leisure and tourism become the consuming aspects of older identity of the city, I was interested in seeing how the viewers to my exhibition would relate to material cultures that are lost or forgotten with technological advancements.

Also, my exhibition opened some literary and sculptural works to the viewers; to bring them closer to certain older, forgotten experiences to aspects of physical labour, materiality and intimacy. Some works brought together the world of mundane materials that are associated with industrial labour as well as 19th century aspects of framing nature into archiving or experiencing nature.

Some of the works that were produced and shown in the exhibition in Hamburg will be on view in Bangalore in January 2020, at Gallery Sumukha.
Top