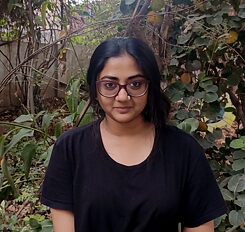 © Sarasija Subramanian Sarasija Subramanian’s practice stems from analogies derived from the organic world, in relation to its cultural and political implications. In the process of research, interaction, and documentation, her active archive of images and objects continues to grow, incorporating multiple
histories and presents.

Sarasija is currently based in Bangalore, India, where she is the editor of Reliable Copy - an independent publishing house for works, projects, and writing by artists. She received her Master’s Degree from M.S.U. Faculty of Fine Arts, Vadodara in 2017 and has previously participated in studio residencies at 1Shanthiroad Studio/Gallery (Bangalore, 2018), Interface at the Inagh Valley Trust (Inagh Valley, Ireland, 2017), Space118 (Mumbai, 2017), the Building Bridges Project with EAS (USA, 2017), and the Inlaks-UNIDEE Residency at the Cittadellarte (Biella, Italy, 2016).

During her time at Zentralwerk, she will engage with two museum collections in Dresden – the Deutsches Hygiene Museum and the Lugen Museum. Focusing on research and documentation - towards a body of work centered around intimacy, the body, its care, and the violence that comes with it - she will extend her current research and practice, looking at new ways to unpack concepts around knowledge systems, and how relationships with both ourselves and others play a part in rupturing these beliefs.

Sarasija Subramanian @ Zentralwerk (Nov. - Dec. 2021)
The residency at Zentralwerk e.V was unlike previous residencies I have done (in both India and elsewhere), particularly in the fact that it gave me dedicated time in the studio to pursue a new set of engagements - which is often difficult from home, with other preoccupations.

In addition to the time spent in the studio, and with the practitioners there, the conversations assured a constant inflow of reference material – ranging from texts and other artistic practises to cinema and music – which will help shape the project I began. Further conversations with the team played a large part in understanding models and infrastructures of art spaces in Germany, the socio-political structures within which cultural practitioners’ function there, and the ideas and urgencies that populate the contemporary art world there – both in terms of strengths as well as gaps to be filled.

During my time there, I engaged with the collection at the Deutsches Hygiene-Museum and focussed on research and documentation towards a series of works centred around the way in which structures of State and science have viewed the body of the individual, and the violence that it inflicts and/or is subject to. The preliminary drawings I made there bring together objects from the museum’s collection, and texts from either the museum labels or the audio guide. The ways in which the museum brings together objects, historic significance, and didactic instructionals became my primary point of interest, particularly with reference to its founding ideology which stressed on ‘seeing’ and consequently ‘knowing’ our bodies as being the key to keeping healthy without question. This collection (and the founding ideology) was then constantly co-opted by every political regime for over a century. The accompanying image is a drawing made during my time at Zentralwerk, referencing specifically a politically-driven call for re-thinking how information is circulated by the museum.