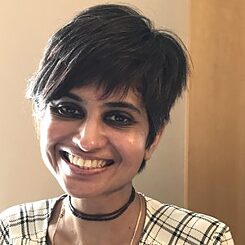 Her practice deals with hyperreality of spaces, objects and memories, and her work in this regard has been shown at Rotterdam Photo Festival (2018), Offprint - Tate Modern (2018), Athens Photo Festival (2018) and J Book Show at Cork Photo Festival (2018). Her publication How to Sit for the Camera (2018) is also distributed by A6 Books, a subsidiary project of the London Centre for Book Arts (London), as well as MoMA PS1 (New York) and Printed Matter (New York).

At Lichtenberg Studios, Shruti will work with photography and printmaking to explore the photoautomats of Berlin as sites of everyday encounter between people, portraiture, reality and imagination.