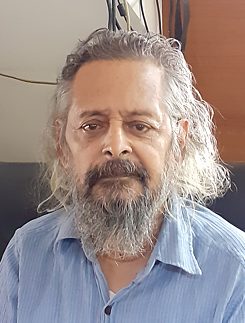 ©Umashankar Mantravadi Umashankar Mantravadi is a sound recordist and technician. For the last ten years, he has been building low-cost ambisonic microphones, using these instruments to record music and, more importantly, to take acoustic measurements in archaeological spaces. His development, the Brahma, is a four-headed microphone, uniquely designed to capture multiple audio properties. There are now eight-capsule and sixteen-capsule microphones being built as well.

He has received two grants from the India Foundation for the Arts for his work in archaeoacoustics. The first in 2015, to do acoustic measurements at two archaeologically important sites at the Vadakkamnathan Koothambalam in Thrissur, and the amphitheatre at Anupu, in Nagarjunakonda. The second in 2018 to train students of archaeology, acoustics, and theatre studies in archaeoacoustics.

He has given talks at the School of Architecture and Environment in Bombay, at an archaeological conference in Jaipur, at the Kiran Nadar Museum in Delhi and Bangalore International Centre on his work in archaeoacoustics and its purpose.

At Wisp Kollektiv, Leipzig, he will work to build a portable 3D sound system that would help audiences better hear the ambisonic recordings he collects at archaeological sites.