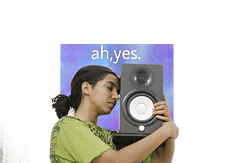 © Sultana Zana Sultana Zana (b. Varanasi, India, 1992) graduated as an Instrumentation and Control engineer and worked as a researcher at the Computational NanoTechnology Lab (CNTL) at the Indian Institute of Information Technology, Gwalior(2015) and holds a Masters in Creative Arts from Srishti Institute of Art, Design and Technology, Bangalore (2018).

Zana is a new media artist working with sound synthesis, spatial sound composition,  film, code and blockchain technology. Her non-human collaborators include, but are not limited to, mycelium, mushrooms, trees and some insects. New developments in media technology, network theory and ecological research shape her work.

Currently, Sultana is developing FIELDENESS - a body of work that attempts to facilitate a growing blockchain and ecological network. The project is a recipient of a grant from the Goethe-Institut / Max Mueller Bhavan and is being realised within the framework of Five Million Incidents 2019-2020. Her film ‘Of the Millions of Possibilities’ was exhibited at the show We Are Still Alive at the India International Center, Delhi in January 2020. In 2019, she was invited to participate at the 4tables Art Residency in Bir, Himachal Pradesh where she developed The Earth Lab (2019) using mathematical models of networks to explore tree intelligence. Her installations, films and sound works have been exhibited at Kochi Biennale Collateral (2018), Mumbai Gallery Weekend (2019) and in multiple exhibitions in Delhi, Bangalore, Mumbai, Chennai and Goa. Zana is part of Cynk Collective, that runs Walkin Studios; an independent multidisciplinary art studio and project space. She is also the co-founder of the collective NOTAAT with scientist and researcher Puneet Jain within which they investigate 'sense perception in humans and non humans'. The artist lives and works between Delhi and Bangalore.