Digitalisation has found its way into every household, every office, every car and every business. It's no longer just mobile phones and tablets, it's now about artificial intelligence, smart homes, blended learning, online libraries, etc. How does this development change our cities, our apartments, how does it change our communication and consumer behaviour? We are increasingly living through our devices, no longer shaping personal relationships, but rather using digital interfaces.

The project comprises of a series of on/offline workshops, and which also involves input from facilitators/experts, encourages participants to reflect on their relationship with the urban and to frame how experiences of the city have increasingly been mediated by the digital - at scale, or for the individual. Cities are provocative sites to imagine the ubiquitous role of technology, and themes such as the gig economy, the smart city, start-up culture, surveillance: these will all form part of the material that participants can work with.

Smarter Digital Realities is a project conceived and conceptualised by Sandbox Collective in collaboration with the Goethe-Institut / Max Mueller Bhavan and curated by Padmini Ray Murray. 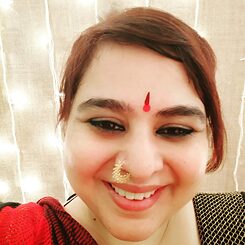 Padmini established the first degree level digital humanities programme in India at the Srishti Institute of Art, Design and Technology where she was course director from 2016-2018. She was the recipient of the Arts and Humanities Research Council Unbox Fellowship (2012-13) and the co-investigator with Claire Squires on The Book Unbound, also funded by the Arts and Humanities Research Council. She is currently co-investigator on Gendering the Smart City with Professor Ayona Dutta, and the digital lead on Two Centuries of Indian Print, a project in collaboration with the British Library and Jadavpur University. She served as a trustee for Wikimedia UK from 2013-2014, and led a research project on platform governance and design for the Ekstep Foundation in 2018.

As a creative practitioner, Padmini creates new media work which reflects her research and interests, such as Darshan Diversion (with KV Ketan and Joel Johnson), a feminist videogame about the Sabarimala temple controversy (2016); Halt The Hate (with Pratyush Raman) an interactive database of crimes against minorities for Amnesty India (2017) and is currently working on Visualising Cybersecurity – a Hewlett funded project that aims to alter how cybersecurity is depicted and discussed in the media (with the Centre for Internet and Society and Paulanthony George), and A is for AI: A Dictionary of AI (with Pratyush Raman, 2020). Padmini’s most recent published work focuses on how corporate online space, commit and perpetuate epistemological violence against the marginalised, through collusions of infrastructure and the interface.