As part of our continuing engagement with current social and urban issues, we are happy to host the 9th edition of the Bangalore Queer Film Festival (BQFF) - once again with a package of path-breaking films, including a selection curated by the Berlin Film Festival Berlinale Spotlight.

BQFF is an annual event that carefully selects queer films from all over the world and brings them to an ever-growing Bangalore audience. The Festival serves as an important platform for screening new Indian, South Indian and international movies that push the boundaries of understanding and rigorously explore the mental, emotional and physical lives of those who stand outside the sexual norm. 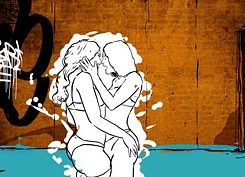 © Leite Filmes
In this animated fairytale Filly, a lesbian fairy with nimble fingers, seduces women by day dressed as a boy. But at night something strange happens and soon half the population of Whatsit Village are eagerly queuing up.
Sunday, 11th March, 2:09 p.m. 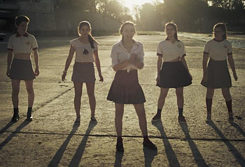 © Martín Horacio Paolorossi,Agustina San Martín,Inés María Barrionuevo
It's not long to go until Cata's 15th birthday and she's getting more nervous by the day. She's irritated about her dress, her chilled-out friends, everything! Even her level-headed and reserved cousin from Sweden annoys her. But Cata's moodiness gradually gives way to tentative feelings of affection. In a sensitive portrayal the two directors gently capture the emotional whirlwind and irritations of a teenager.
Sunday, 11th March, 4.25 p.m.

© New Stories AB
Ten-year-old Cleo has a head full of questions: How can I tell if I'm in love with somebody? How do I know if I prefer boys or girls? Since her older sister began dating another girl, there are new, strange feelings stirring inside Cleo. During a trip to the Norwegian fjords, she broaches the subject with the young couple and is given some helpful advice.
Sunday, 11th March, 4:09 p.m.

© Hochschule für Bildende Künste Hamburg
The present, the whole present and nothing but the present. A young man on a footbridge, a bus departs, his friend is gone. This is followed by a majestic parade through a shopping centre. This central shot in the film is a fragile balancing act between documentary observation and subtle direction. Deliberately asynchronous sound serves to heighten the sense that events are nothing more than a construction of an apparently familiar reality. The boy's melancholic bearing, and the way the film unfolds, are embedded in an extremely expressive, albeit narratively minimalistic, dramaturgy of colour. Vibrant colours introduce each individual sequence: blue, green, yellow, orange, red.
Saturday, 10th March, 12:26 p.m.

© Bautafilm
The sea. High waves. Dark water. A border fence, two men in hiding. Their flight begins. Only one of them will reach Sweden.
One of the men is played by Abdi Aziis, who himself has fled from Somalia to Sweden in order to escape the oppression and persecution of gay men. “He is our comet” explains director Victor Lindgren, who, in merely a few selected situations, manages to convey the exertions, the deep abyss, the arrival and the loneliness of those who flee. Both men lay alongside each other on a bench, one arm extended across the other’s belly – an image that symbolizes their intimacy, their shared experience. And in the next moment it’s all gone. Forever. How can life go on?
Saturday, 10th March, 9:50 a.m.

© Loco Films
A kiss by the sea, a promise for life. Who goes to the Baltic coast in the autumn? Nobody except Martin and Andreas. They come here every year and, every year, their son Max is a bit taller, and their own faces a bit older. This time Martin is fed up. The weather’s unpleasant and he’d much rather have stayed at home. Andreas on the other hand tears off his clothes and jumps into the freezing sea. A worried Martin tries to stop him and, stumbling, gulps down the salty water. Back at their holiday home the mood is weighed down by their different expectations of how they should spend their holidays together. What do they have left after all these years?

So many films about relationships end at the point when the couple have found each other. For director Chris Miera however this is precisely the moment when the interesting stories begin. What is the force that causes two people out of billions to decide to spend so much of their lives together? And what makes couples decide to part after such a long time? These are the questions that Ein Weg (Paths) sensitively investigates. The film portrays a bittersweet life’s journey of the couple.
Saturday, 10th March, 7:58 p.m. 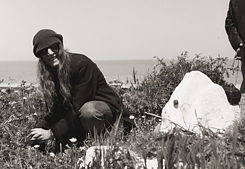 © Filmgalerie 451
There are places of yearning. There are promises that accompany us our entire lives.
Saturday, 10th March, 12:54 p.m.