An evening of conversation between Katharina Winkler and Sandip Roy

Katharina Winkler, born in Vienna, in 1979, grew up in a small village in Upper Austria. She studied piano at the Anton Bruckner University of Linz, and later studied German literature, drama and philosophy. She received her doctorate degree at the University of Vienna. Her first novel Blauschmuck was published by Suhrkamp Berlin in 2016 and translated into several languages, She received numerous international prizes and awards. Suhrkamp published her first theatre play (au) REVOIR ÉDITH PIAF in 2020. Katharina Winkler currently lives in Berlin.

The conversation was broadcast live on the Facebook page of the Goethe-Institut Kolkata on 25.06.2021. You can find the recording of the conversation at:  #4_Youtube 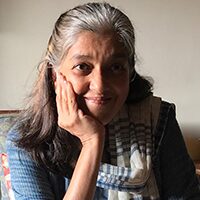 © Ratna Pathak Shah Ratna Pathak Shah is one of most prominent actresses in India on screen and on stage. She studied at the National School of Drama, New Delhi. She has played leading parts in several plays in English, Hindustani and Gujarati like The Lesson, Silence! The Court is in Session, Don Juan in Hell, The Misunderstanding, Dear Liar, and many more. On television, she has acted in long running serials like Idhar Udhar, Filmi Chakkar and more. Her film work includes her roles in eminent films Heat and Dust, Mandi, Mirch Masala, and many more. She is a founder-member of Motley, a theatre company in Mumbai and has directed A Walk In the Woods (a play on the Indo-Pak relationship), and Florian Zeller’s The Truth.