The 15th edition of DIALOGUES: Calcutta International LGBTQIA+ Film & Video Festival - India's oldest non-commercial queer film festival will open on 25 November 2021. The festival presents a carefully curated selection of feature films, short films and videos by Indian and international filmmakers on various aspects of lesbian, gay, bisexual and transgender communities. At the same time, the festival sees itself as a forum for independent films and videos from India and other countries on socially relevant topics beyond the queer spectrum, which are explored in depth in discussions and workshops. The festival honors writers, directors, actors and their works that deal with gay, lesbian, bisexual, transgender and transsexual issues and concerns, but does not limit itself to narrow definitions of these identities. DIALOGUES believes that cultural activism is an important tool in working for justice and dignity.

DIALOGUES: Calcutta International LGBTQIA+ Film & Video Festival was launched in 2007 as an annual event in Kolkata - a film-loving city that hosts diverse film and video festivals on different genres and aspects, but left a void when it came to queer films and the social discussion of issues reflected therein. DIALOGUES, organized by Goethe-Institut / Max Mueller Bhavan Kolkata together with Sappho for Equality and Pratyay Gender Trust - has since its inception hosted retrospectives on Rainer Maria Fassbinder, Derek Jarman and Agnes Varda among others.

Due to changing conditions caused by the Covid 19 pandemic, the 2021 festival will be held online.

The festival will open on Thursday, November 25, 2021 at 6:00 pm IST. The opening program will be followed by the screening of the first festival film.

This year the festival brings you over 60 films from around the world with several talks and sessions. Have a glimpse of the section brought to you by the Goethe-Institut / Max Mueller Bhavan Kolkata curated by Maike Mia Höhne. 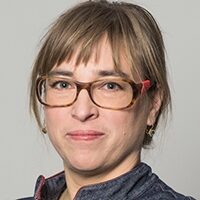 © Berlinale/Foto Ali Ghandtschi Maike Mia Höhne is the artistic director of the festival since 2019. She works as a curator and juror for several institutions and festivals worldwide. She takes part in the advisory council for the Sharjah Film Platform Advisory Committee since 2018. From 2007 to 2019 she was head of Berlinale Shorts of the Berlin International Filmfestival and gave a clear profile to the short film section. Her commitment with Dialogues runs since many years