A Panel Discussion moderated by Manish Chakraborti with lessons from Germany, UK, USA and The Netherlands

Hooghly was a waterway of truly global significance, attracting merchants, missionaries, statesmen, soldiers, and labourers from Asia, Europe and elsewhere and was a centre of global history. The unique cultural landscape can still be traced back in the erstwhile trading posts and settlements, retained in terms of heritage buildings and places along the river. Nowhere else in the world is there a more concentrated zone of built heritage which has witnessed the commercial and cultural interaction between East and West from the early phases of the colonial history in India.

With the changing course of the river, decline in port activities and jute industry and change in political dynamics, the riverfront was neglected. The redundant warehouses and jute mills, waterworks, the vernacular structures, temples and ghats are in a dire state, while the grand river facing houses have been incrementally altered and often replaced with concrete blocks beyond recognition. However, these settlements have a spectacular architectural heritage, which is recognised globally. Its heritage is a priceless economic, social, cultural and environmental asset, which can drive forward its regeneration, attracting inward investment, jobs, skills and benefits for all its citizens.

The panel discussion will include experts from India, Germany, The Netherlands, United States of America and United Kingdom presenting case studies as to how reuse and heritage-led planning is a tried and tested solution which has worked successfully to revive other great waterfront cities around the world, aiming to move towards preparing a creative reuse led plan for the future development of the Hooghly Heritage Landscape.

This programme is part of The Hooghly Heritage Hub supported by EUNIC (European National Institutes of Culture) Global and presented by the Goethe-Institut / Max Mueller Bhavan Kolkata. 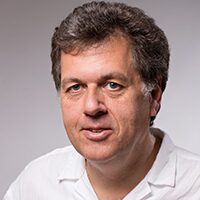 Dr. Frank Eckardt is a political scientist who has held the professorship for sociological urban research at the Bauhaus University Weimar since 2008. There he is active in the training of urban planners. He is director of the Bauhaus Research School and course director of the English-language master’s programme "European Urban Studies". Frank Eckardt has researched various urban development issues and has published extensively on them. The main topics in recent years have been questions of migration, racism and cultural diversity in the city, as well as social inequality and segregation. Increasingly, however, the challenges of ecological crisis such as climate change and the protection of the natural resources have got preference in his work. With Anton Brokow-Loga, the focus of research has been shifting to the concept of the "post-growth city".

The Emscher has been the core river of the industrial landscape of the "Ruhr area" (Ruhrgebiet). Used as a transport line for industrial goods, especially coal and steel, the river was highly polluted and was not recognizable as a river at all for more than a century. As de-industrialization started in the 1960s, slowly the awareness of the Emscher and its adjacent channel as places of nature and leisure rose. When in the 1990s, the political attitude towards the river changed, major steps were undertaken to re-naturalise the river. Just this year, this most expensive project of river sanitation in German history has been finished. Dr. Eckardt will present an overview about the changing context of this re-naturalisation and its different phases. The presentation will bring forth deep insights into the successes and difficulties and the sustainability of the same in times of climate change. 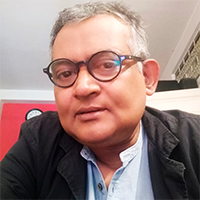 Manish Chakraborti is an architect and urban planner. He is one of the leading conservation architects whose works has been widely published in national and international journals and media. He has authored various books on architecture and conservation, guided students’ theses, has been a guest columnist and a visiting faculty to schools of architecture in India. He is currently the Head of School of Architecture and Planning at Sister Nivedita University in Kolkata. He has worked on the Nomination Dossier of Santiniketan for World Heritage Site inscription, which is under consideration by UNESCO. Recipient of the UNESCO Asia Pacific Heritage Award of Distinction in 2016 for the Conservation of St. Olav Church, he has been conferred with Society Interiors Honours Award and Sutanuti Honours Award for two decades of architectural conservation advice and practice in Kolkata and India.

Paul Meurs studied architecture and restoration at Delft University of Technology and obtained his PhD at the Free University Amsterdam with a thesis entitled De moderne historische stad (The Modern Historical City). In 2006 he was appointed professor of restoration at the faculty of Architecture of the TU Delft. Paul Meurs is also a member of the Committee for Beautification and Monuments in Rotterdam and of the Architecture Committee of the Council for Culture. In 1989, Meurs founded Urban Fabric, office for research and advice on urban design and architectural transformations. He is the director of SteenhuisMeurs, together with Dr. Marinke Steenhuis specializing in research and consultancy for heritage development, adaptive reuse and urban transformations.

Dr. Siddhartha Sen is the Associate Dean and Professor of the School of Architecture and Planning and the Director of Graduate Programme in City and Regional Planning at Morgan State University in Baltimore, United States of America. He is a recognized scholar on Indian urbanization and the non-profit sector in India.

Dr. Shikha Jain is the Director of ‘Preservation and Community Design’ and is also the chairperson at the Development and Research Organisation for Nature, Arts and Heritage (DRONAH). Her wide experience in cultural heritage ranges from representations at International World Heritage UNESCO meetings on conservation planning and on-ground implementation of more than fifty conservation and museum projects across India. As an international expert, she has advised the National Heritage Board, Singapore, FRIM-Malaysia, SGTS, UAE, UNESCO Jakarta Office, Indonesia, UNESCO New Delhi Office and the Department of Archaeology, Myanmar. Dr. Jain has also been a Member Secretary to the Advisory Committee on World Heritage from 2012-2015 for Ministry of Culture, India.

They will be jointly presenting along with Dr. Siddhartha Sen.

In order to attend this programme kindly register at here.

After registering, you will receive a confirmation email containing information about joining the webinar.