A film by Sankha

An intimate portrayal of Sudeb Suvana, a transgender, who undergoes Gender Affirmative Surgery in order to negotiate the conflict of body and mind. This decision creates turmoil in her family, who fear societal backlash. As love remains elusive as always, Sudeb realizes that the surgery could not change her destiny as transgender, forcing her to reconcile with the reality anew. 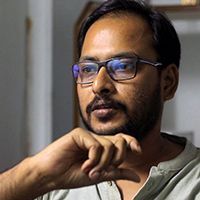 Sankha has studied editing in Satyajit Ray Film & Television Institute, Kolkata. He has participated in Berlin Talent Campus 2010. Films edited by him have been screened in major festivals including Berlin, Toronto, BFI London, IDFA, Goteborg, Busan, Hong Kong, DokLeipzig, Germany and Museum of Modern Arts (NY) and has won several awards around the world. He turned to direction with ‘Dui Dhuranir Golpo’ (In-between Days, 2012), a documentary on the transgender community of Kolkata. It was screened at CPH:DOX, Yamagata, Docpoint Helsinki, Astra Film Festival, Vancouver Queer Film Festival and won Best Documentary Award in Kolkata International Film Festival 2014. His second documentary ‘The Wind in the Maruwa Field’ was selected in Indian Panorama and screened at IFFI Goa 2016. ‘Hridoy Bosot - A Home for My Heart’ has been mentored and pitched at Dhaka Doc Lab 2017, Docedge Kolkata 2019 and Goodpitch India 2020. The film premiered at the Jio MAMI Mumbai Film Festival 2022 and won Special Mention Award at Signs Film Festival Kerala, organized by Federation of Film Societies.

The screening will be followed by a moderated discussion between the filmmaker Sankha, the protagonist Sudeb Suvana and Anindya Hajra.

Anindya Hajra is a transfeminist, transgender rights and social justice activist based in Calcutta, India whose relationship with transfeminisms has spanned about two decades. In 1998 she co-founded Pratyay Gender Trust, one of the early community led collectives in India that became a support space for gender non-conforming and transgender persons facing harassment, stigma and violence for their gender identity/ expression.

This programme is open to all on a first come first served basis.
COVID protocols applied.