An evening of music at the cafe

‘Returning Sound’ is a specially curated series of music programmes presented every month at the institute. The programme is curated focusing on unconventional music written by independent electronic music producers.

The series is curated by Varun Desai who says:

2022 marks the return of public music events but few of them are meant to process what has happened to humanity over the last few years. ‘Returning Sound’ has been curated to restore a sense of community using electronic music to help reintegrate group listening, reflect on our collective experiences and navigate into an incalculable future.

The fifth programme of the series will feature Indrayudh Shome and Shailpik Biswas / ShadowBlink.


DETAILS ABOUT THE ARTISTS 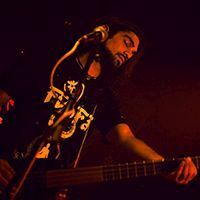 © Indrayudh Shome Indrayudh Shome: Indrayudh (Indy) Shome is an artist, designer, and creative leader. He was born in Kolkata in 1989 and grew up around four corners of India, Hong Kong, and Singapore, before moving to the USA for university. He holds a B.A. from Brown University where he pursued an independent program in Music, Media, and Consciousness. He is currently based in Philadelphia, where he is designing and teaching the city’s first high school pre-professional program in Music and Media Production. In 2016, he earned US Permanent Residence as a “Musician and Composer of Extraordinary Ability” for his work’s “original contributions of major significance.”

His work in experimental music began at an early age and has led to diverse projects around the world. At 16, he formed Queen Elephantine, the project that became his most prolific and consistent. They draw from psychedelia, doom, drone, and noise as well as free jazz and sacred music from around the world. Their latest release was a 2021 collaboration with Phurpa, the Moscow-based practitioners of ancient Tibetan chant.
More recently, Shome has been developing a solo project called Red Maya.

Other projects include the Drone Castle, a large-scale immersive sculpture and interactive live sound installation, which Shome constructed as an artist-in-residence at AS220 in Providence in 2014. He also recently created the feature film score and sound design for the thriller Higher Methods, which won the Massachusetts Independent Film Festival award for “Best Score” in 2022. 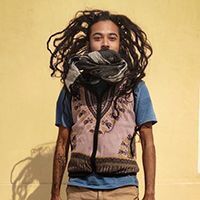 © ShadowBlink ShadowBlink: ShadowBlink is a mixed media production and live performance art project by Kolkata-based artist, Shailpik Biswas. The live performance blends venue-specific visual installations featuring his own multilayered visual journey (photographs, videos, generative and reactive visuals) with cutting-edge music, on-stage collaborations, spoken words and acoustic elements. The music is a melodic execution of industrial sounds, glitch techniques, and eccentric rhythms that mostly avoid the 4 to the floor approach. Above all, ShadowBlink is a soulful expression of an ‘Urban’ musician who has grown up loving the raw organic power of melodies and the grungy depths of a mechanised society.


DETAILS ABOUT THE CURATOR: 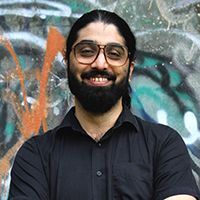 © Varun Desai Varun Desai is a multi-disciplinary artist and an electronic musician as well as a computer engineer working in the field of music production and arts management. He’s been a teacher and lecturer for both hardware and software platforms, as well as a graphic designer, creative coder, video artist and instrument maker. He is the founder of Synthfarm, an annual music and technology residency and is the Director of the Kolkata Jazzfest. His company Littlei has been producing music events in Kolkata since 2007 and encourages the development of new art and music traditions.

This programme is open to all.

Entry to the programme will be on a first come first served basis till seats are full.
COVID protocols will be maintained, guests are requested to wear masks and temperature will be checked at the entrance to ensure everyone’s safety.