An evening of conversation between Jo Lendle and Sandip Roy

Jo Lendle was born in 1968. He studied literature, cultural studies and philosophy, and from 1997 was involved in setting up the literature program at DuMont Buchverlag, of which he became publisher in 2010. In addition, he has been a visiting professor and lecturer at the universities of Leipzig, Hildesheim, Munich and Biel. Jo Lendle has been publisher of Hanser Literaturverlage since 2014. He is the editor of the literary magazine Akzente and a member of the board of trustees of the Literaturhaus München, the publishing committee of the Börsenverein des Deutschen Buchhandels, and the board of trustees of the German Literature Fund, as well as a juror of the German Booksellers' Prize. In 2019, the English translation of his novel "Alles Land" was published by Seagull Books, Kolkata. In the fall of 2021, his fifth novel "A Kind of Family" will be published.

The conversation was broadcast live on the Facebook page of the Goethe-Institut Kolkata on 23.07.2021. You can find the recording of the conversation at: 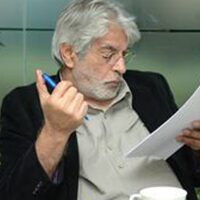 © Jayant Kripalani Jayant Kripalani has acted on stage, on television and in films. He has directed films, TV shows and plays. He has written two books of stories and a book of poems. He lives for the moment and in the moment. He doesn’t take anything seriously and no one is expected to take him seriously. He expects to die like a millionaire…to go to sleep one day and not wake up.


Enjoy a short reading of an excerpt from the book ‘All The Land’ by Jo Lendle performed by the author himself in German.