Could you please shortly describe what the African Continental Free Trade Area  (AfCFTA) is and why it is important, in particular for the African cultural and creative industries (CCI)?

The African Continental Free Trade Area (AfCFTA) is a trade agreement, launched in 2018 by the African Union (AU). Once completely ratified and adopted as intended, the AfCFTA will create and cover a unified market of 1.2 billion people and 54 countries, making it the largest free trade area agreement in the world, in terms of the number of countries participating.

The AfCFTA embodies the ambition of significantly increasing intra-African trade and Africa’s exports to the world by ushering in an ease of doing business across the continent that hasn’t existed to date, particularly in Africa’s creative and cultural industries (CCI). Once realised, the AfCFTA is potentially a game changer. It is a bold step for a continent still grappling with decolonisation, self-determination and crafting its own identity in a world not used to Africa functioning for its people, first. 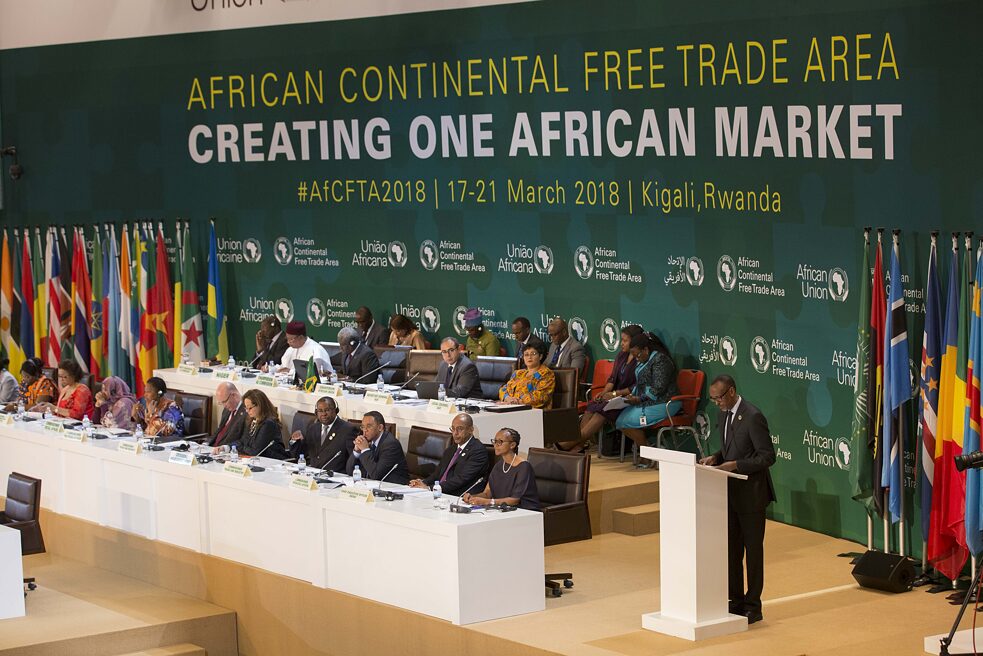 Chairperson of the African Union and Rwandan President Paul Kagame delivers a speech at the 10th Extraordinary Session of the Assembly of the African Union on the African Continental Free Trade Area (AfCFTA) in Kigali, Rwanda, on March 21, 2018. Forty-four African countries signed an agreement establishing the AfCFTA in Kigali. | Photo: © picture alliance / Photoshot For the creative and cultural industries (CCI), similarly to other industries, the AfCFTA will create a single continental market, with free movement of business persons and investments, progressively removing the tariff and non-tariff barriers to the trade of intra-African goods and services, which have historically prevented CCI practitioners from easily accessing the rest of the continent.

This new massive regional market will eventually make it easier for Africans to monetise their creative and cultural work within Africa, without requiring exposure outside the region in order for their work to generate a sustainable living. Elimination of tariff and non-tariff barriers through tools like a coordinated continent wide intellectual property protections, free movement of business persons, lower taxes on crafts and textiles traded within Africa, a coordinated investment policy that includes the CCI’s, could all catapult Africa’s creative and cultural economy.

The African Union declared that the theme for 2021 would be “Art, Culture and Heritage - levers for building the Africa we want”. What is the role of culture in the continent’s development, and in the trade between African countries?

In 2013, 50 years after the formation of the Organisation of African Unity – the predecessor to the AU – African countries signed a Solemn Declaration rededicating Africa to a Pan-African vision of “An integrated, prosperous and peaceful Africa, driven by its own citizens, representing a dynamic force in the international arena”. Tiwa Savage is an internationally successful Nigerian singer, songwriter, and actress. In 2013, she released her debut studio album “Once Upon a Time”. Picture taken in 2019. | Foto: © picture alliance / Photoshot To achieve that Pan African vision, Agenda 2063 was created, to manifest the AU’s goals and aspirations for what Africa could be, by 2063. Most significant to the conversation about Arts and Culture is Aspiration 5: “An Africa with a strong cultural identity, common heritage, shared values and ethics”. Equally significant to any conversation about the Creative and Cultural Industries (CCI) is Aspiration 1: “A prosperous Africa based on inclusive growth and sustainable development”.

It is in this context that the role of culture in the continent’s development, and in which trade between African countries, must be conceptualised. CCI, and the goods and services produced in this economy, are investments which should be catapulted by the AfCFTA - a trade and investment treaty.

In the past, as African countries became independent, an African renaissance was experienced with inspired and inspiring leadership both in politics and in arts and culture. Aspirational African politics have always had a symbiotic relationship with the arts, influencing artists who reflect and interpret the world around them. 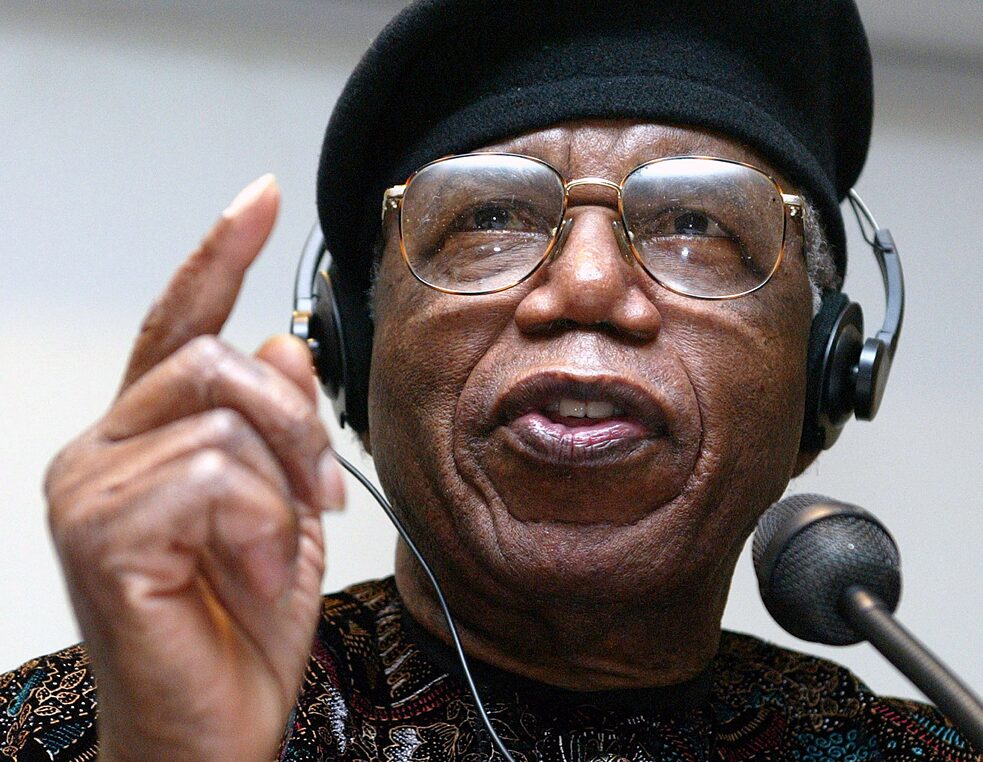 Modern African artists as well as cultural and heritage practitioners are recrafting what it means to be African, building the foundation for our shared values in 2063 before and beyond. Artists like Tiwa Savage, Burna Boy, Davido and Wizkid currently exist as some of the biggest artists on the global stage. Together with ground-breaking films like Moffie, Rafiki and Inxeba (The Wound), modern African artists like MX Blouse, Dope Saint Jude, Desire Marea, Nakhane, LeloWhatsGood centre the LGBTQ+ community in Africa’s common identity. Artists like Jojo Abot, Thandiswa Mazwai, Lebo Mashile and the Umoya podcast exist as a platform for modern Africans to explore themes of spirituality and identity outside of the bounds of organised religion and colonial influences. Amoako Boafo, Kwesi Botchway and Zanele Muholi, through visual arts are centring interpretation of power, heritage and existence in an African framework. Artists like Moonchild Sanelly are initiating conversations on body and sex positivity, while Nnedi Okorafor expands thoughts on Afrofuturism and science fiction. Through the artists, African discourse of human rights and identity has expanded beyond topics like racism and equality to a wider range of topics including feminism and gender based violence. Through the work of the arts and culture foot soldiers, the image of Africans about themselves is again evolving – a new wave renaissance. 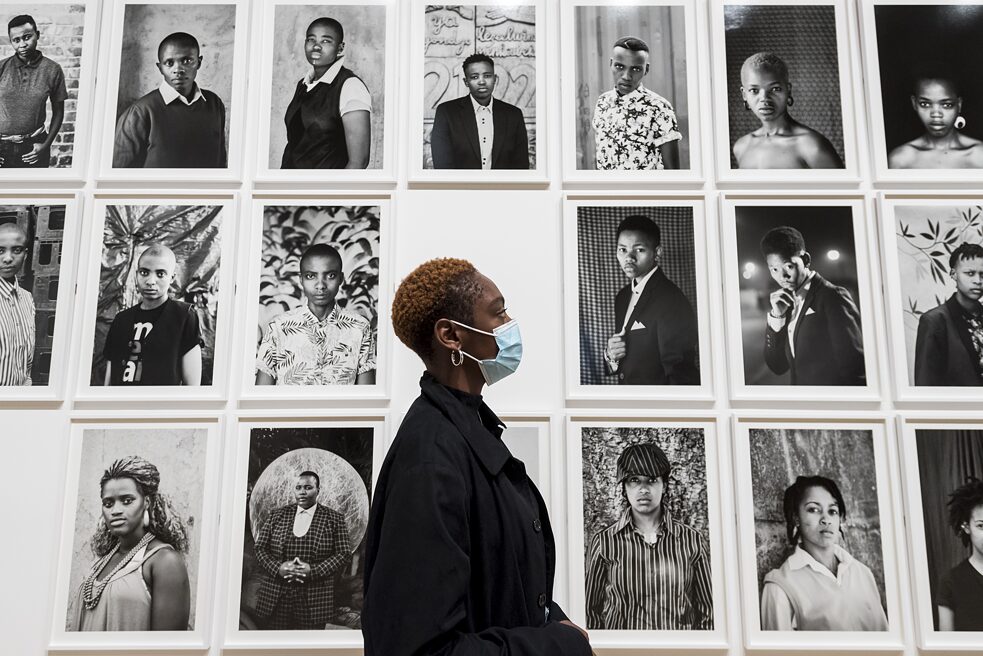 3rd November 2020, London: The exhibition by South African visual activist Zanele Muholi at Tate Modern. 260 photographs document black lesbian, gay, trans, queer and intersex lives in South Africa. | Photo: © Stephen Chung / London News Pictures via ZUMA Wire Arts and culture are also a vehicle for the creation of content and in a world with economies driven by tech and data, content is king, and Africans are taking up their share of the online space and building new sources of income through visibility and representation on the internet. The break down in trade barriers of art in 2021 are occurring parallel to discussions about the repatriation of African art and the subsequent participation of Africans in regional and global arts tourism and the museum and gallery economies. African creativity and culture is being recognised as a crucial natural resource, primed for industrialisation and beneficiation as it is exported first across the continent and then to the rest of the world.

What positive impact could the AfCFTA have for the economic development of smaller African states with a population of less than two million people in comparison to highly populated African countries?

Traditionally, smaller populations or markets would make creating a living sustained inclusively by arts and culture a difficult hill to climb, without a loyal audience or high end creative output. This would also serve to make arts and culture an elitist endeavour for audiences to engage with, alienating the creative input inspired by an African experience, from the majority of Africans. Outside of the online space, distribution of and access to creative output translated into an expensive exercise, made more difficult by visa restrictions across the continent and high tariffs attached to cultural goods.

The AfCFTA will create an African Trade Observatory, which will provide those operating in Africa’s CCI with up-to-date and reliable trade data, an essential resource for those operating from smaller markets and seeking to be competitive on a regional level.

Ultimately, for all Africans targeting this potential regional audience of 1.2 billion people the AfCFTA lowers the barriers of access and entry into this regional market. With the removal of trade and non-trade barriers promised in the AfCFTA, it becomes easier than ever before, for creative and cultural practitioners from countries with smaller populations, to create and protect content as well as distribute that content across almost the whole continent. This also serves to create language and cultural parity in a forum often dominated by those most represented.

Charlize Theron and Trevor Noah are examples of African citizens who left the continent in order to be internationally successful. How could the AfCFTA’s impact on the film and entertainment industry lead to a shift in perception of the African film sector on the continent and beyond?

Until recently, Africans have been largely underrepresented in mainstream media and even when there was representation, the representation is stereotyped and limited and often not directed by Africans themselves.