Promoting the film industry in Kenya

"Patrick Melrose" director Edward Berger enjoying the reception after a successful Binge Watching event - the first of its kind in Nairobi. © Julian Manjahi In early 2019, Goethe-Institut Nairobi entered into a new venture with two film production companies to nurture the next generation of Kenyan filmmakers.

In partnership with One Fine Day Films and Ginger Ink Films, the institute ran a series of workshops and binge-watching events regarding TV and web series for the first time. The partnership was targeted at training emerging script-writers, producers and directors in the film industry.

The Berlin-based One Fine Day Films and Ginger Ink, a local film production company working in Kenya, developed an extensive programme, which was facilitated and hosted by the Goethe-Institut from January to May 2019. This series of incubation workshops was structured to eventually lead to the first production of an innovative and high-profile international TV series by One Fine Day Films and Ginger Ink in Kenya. 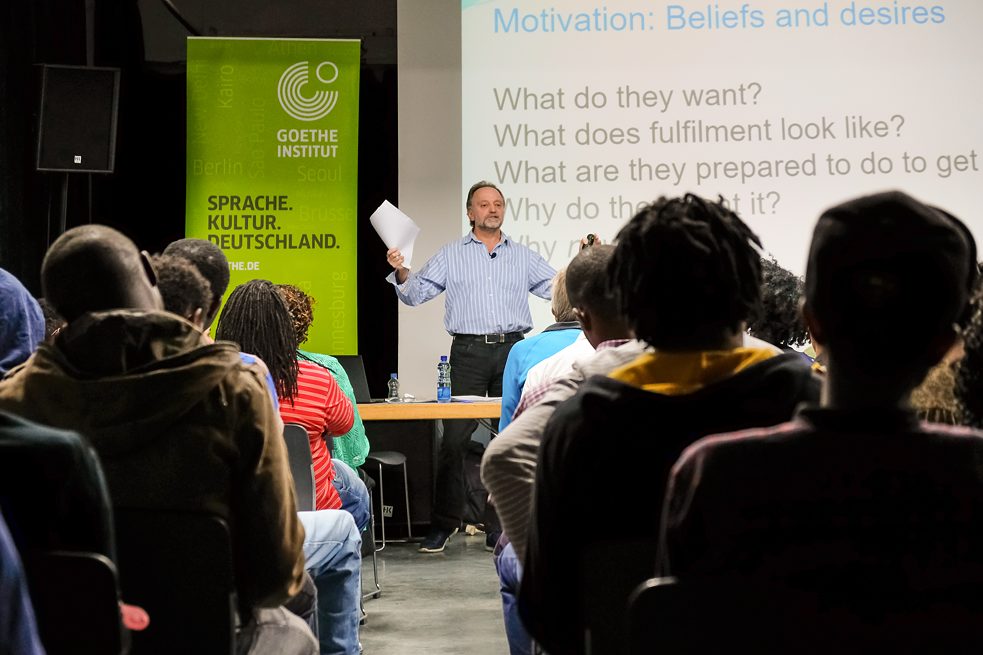 In January 2019: Full house at the Goethe-Institut Nairobi during David Baboulene's lectures.© Goethe-Institut The first intensive training series titled The Primary Colours of Story ran from January 25 to 28. Guest mentor David Baboulene provided insights into story development for film and television formats. More than 200 interested young writers and filmmakers attended. Later on, they were asked to follow the call for applications for the more intimate second workshop edition that followed in March.

From March 10 to 14, 14 selected participants attended a session facilitated by Timo Gössler, Associate Professor for Serial Storytelling at the Film University Babelsberg KONRAD WOLF in Potsdam, Germany. The intensive workshop focused on the creation and elaboration of the storyline and characters for a drama series to be produced by One Fine Day Films and Ginger Ink Films. 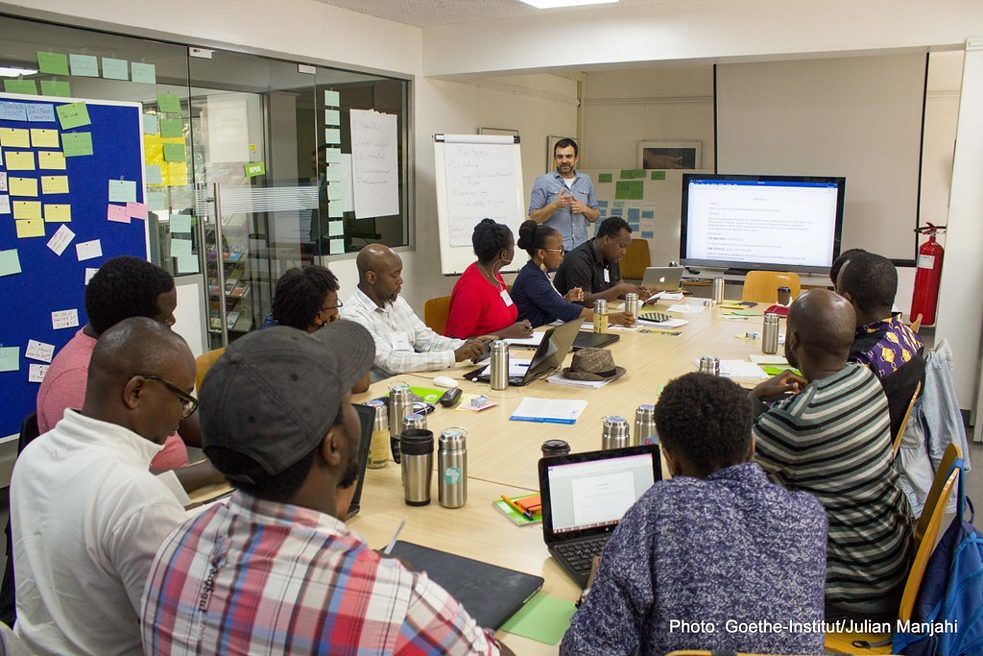 Together with the participants, workshop instructor Timo Gössler of the Film University Babelsberg developed the plot and characters for a web series © Julian Manjahi This was followed by a master class training programme in April, focussed on scriptwriting, directing and producing a feature film. The master class Script Writing for Screen was conducted by renowned German director Edward Berger together with scriptwriter and actress Nele Mueller-Stöfen.

“We have been doing this for the last 10 years, and we have produced seven feature films dedicated for supporting African film-makers to produce African content,” said Ginger Wilson, a co-founder of one of the partnering film firms, Ginger Ink.

“We work in a mentorship-style programme where we invite mentors, scriptwriters, directors and film actors to train the participants,” she said, rekindling memories of the 2012 drama film Nairobi Half Life, which the two companies co-produced. The Kenyan thriller was the work of Kenyan and German film crews.

“We also run workshops, where we invite speakers from overseas to talk about the craft of film-making, and that’s how we ended up with this project,” she said

One Fine Day Films, founded by German film director Tom Tykwer and his wife Marie Steinmann-Tykwer, works with African filmmakers to give them opportunities to write and produce their own content. The German production firm has in recent years trained over 1,000 filmmakers from 21 African countries in conjunction with the DW Akademie.

Tess Wanjiru, 30, is among the first cohort of budding filmmakers who attended the master class Script Writing for Screen at Goethe-Insititut Nairobi.

“It was educative and fun,” she said, adding that the forum provided a chance to interact with award-winning film producers.

“I learnt a great deal from the mentors and I feel inspired,” she added.

Another participant, Godwin Otwoma, 40, a scriptwriter and director said it was an exciting experience that not only enabled young Kenyan filmmakers to learn new production skills but also gave them an opportunity to network.

Otwoma said he learnt about the event through the Goethe-Institut’s social media networks.

“This programme is quite beneficial. It has been an eye-opener for us in the industry in Kenya,” he added.

Participants also took part in a five-hour-long “Binge Watching” of an award-winning mini-series titled Patrick Melrose directed by Edward Berger. Thereafter, the audience engaged with the film director through a lively interactive question and answer session.

“Personally, I enjoyed the binge-watching because we interacted with many people, including the film director,” said Grace Omondi, 22, a budding filmmaker.

“It’s the first of its kind,” she added.

According to Goethe-Institut, the initiative aimed at enabling Kenyan filmmakers to produce their own films and series that are unique and resonate with the local audience. Looking at the format of series as a contemporary means of telling one’s story lies at the heart of this project.