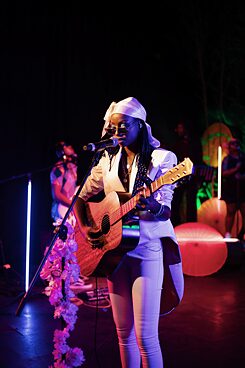 Njerae | music artist © Shem Obara
When is the last time you went to a concert?
The pandemic has led to concerts being pipe dreams of the past, indeed, but there were times when we would be in a wide-open field, swaying to the music of whoever is on the raised dais, having fun, laughing, dancing…being human with the accompaniment of music.
And sometimes, in the middle of the concert, you would hear a loud screeching sound, because no one did a sound check and the speakers were reacting violently. Or the artist would stop singing in the middle of the show because suddenly the microphone was not functioning. Or, even worse, an artist comes on, leaves their heart on the stage, and everyone loves the show; and then you hear a week later, when it is blowing up on Twitter, that the artist was not only not paid, but was also not fed, and is now becoming the focus of public attention to get their dues.

perFORM concert © Shem Obara Not that it is a bad thing to become the focus of public attention, but surely, when you look at the music industry as it is, especially in Kenya, there is a definite gap in what is considered being an artist, or a musician, or an industry professional—whether as a publicist, a practitioner, or a gatekeeper. If only there was some kind of foundational course that could teach people how to conduct themselves professionally and edify others at the same time…
Enter perFORM Music Incubator. Started in 2019, perFORM Music Incubator is a joint initiative between Muthoni Music Entertainment and the Goethe-Institut’s project Jenga CCI, part of the Global Project Culture and Creative Industries. Muthoni Ndonga, popularly known as Muthoni Drummer Queen, who is the founder of Muthoni Music Entertainment, is an award-winning recording, performing and touring artist, who has thrown multiple festivals across the continent, and is well-versed in the very tools and concepts that perFORM is trying to teach. Who else to partner with if not someone who has been through the mill themselves?
In perFORM’s nine to twelve-week live performance and music incubation programme, artists are given a chance to hone their skills, track their progress, create trajectories for their future goals, and learn the basics of performance and what it means to be a creative entrepreneur within the music sector.

perFORM music performance © Shem Obara And what does perFORM stand for, you might be asking? “We fundamentally believe in the innate artistry and business potential of each selected artist and are thrilled to provide an enabling environment to Filter, Order, Refine and Master (FORM) their live performance and business plans,” explains Muthoni.
There is a lot to be said for training artists in this very specific way; the most obvious being that the music industry is almost immediately made better, because everyone understands what role they’re playing, what is expected of them and, even more importantly, how to deliver thanks to what they’ve learned in the incubator. This programme aims to “create jobs and strengthen non-monetary values that contribute to inclusive and sustainable development: innovation and creativity, attractiveness, and perspectives for young people”, which is exactly what it does.
There are seven professions that perFORM focuses on, and then the individuals involved are trained through specifically developed curricula: Sound Engineering, Light Engineering, Artists & Songwriters, Artist Management, Publicists, Event Producers and Music Producers. From this alone, you can see that the development of the syllabus is thought out while following the regular course of a musical event: the artist or songwriter who makes the creative piece, and the music producer who brings the magic together; the artist’s manager, who decides how this piece will be marketed; the publicist, who gets the word out there about the artist and a potential performance/release; the event producer, who is contacted for the performance; and then the sound and light engineers, who ensure that the performance is heard and seen in the best way. This in itself is a coordinated production, and requires an understanding of how it works. This cross-disciplinary approach is taught through classwork, a residency for rehearsals and an eventual public performance, via live classes, workshops, guided rehearsals with performance coaches and immersive artist-in-residency programmes, among other methods.

Wendy | music artist © Shem Obara The pandemic, of course, affected how perFORM did its business. The first cohort went well, and just as they were getting ready to present their skills at a showcase, the pandemic hit in early 2020. This meant that by the time the second cohort were applying, there was only room for online classes, with an eventual hybrid system being set up to provide the artists with an opportunity to be in residence. The third cohort has had the benefit of a more relaxed national pandemic protocol, which has also given the artists a chance to practice their performance in a space where we are almost back to normal, and therefore almost back to the music economy we once knew—or as close as we can get with masks and sanitizer.

Previous artists involved in the perFORM cohorts include: Prisca Ojwang’ (“Magical Kenya”, “Lies I told me”), Mutoriah (“Wangoro”, “Tosheka”), Kash Kaaria (whose latest single, “Flex”, came out in late October 2021) and Karun (formerly a member of award-winning supergroup Camp Mulla, and current AFRIMA Awards Nominee). This year, the cohort was a girl power inspired one, with a roster of stellar women at the helm: Vallerie Muthoni, Groovy Jo, Mayonde, Polaris and Njoki Karu. These artists were accompanied by a number of DJs and producers who were also part of perFORM and had a chance to showcase their talent, such as Masta Luminary, DJ Mura and Suraj.
The programme is over for this year. The last cohort had their performance, and now the plan is to figure out what 2022 will bring. There are hints about a podcast project, featuring past participants, crew and teachers of perFORM talking about their journeys in the incubator and where they are now. A podcast would continue to do the work that perFORM has already done so much of already: passing on the skills and knowledge to the next generation, and continue to elevate the scene as we know it. I, personally, can’t wait.

music artists who took part in the perFORM music incubator © Shem Obara
The project “Cultural and Creative Industries” is implemented by the Deutsche Gesellschaft für Internationale Zusammenarbeit (GIZ) GmbH on behalf of the German Federal Ministry for Economic Cooperation and Development (BMZ) and in cooperation with the Goethe-Institut. It improves employment and income opportunities for creative professionals in six partner countries; Lebanon, Jordan, Iraq, Kenya, Senegal, and South Africa and operates mainly in the music, fashion, design and animation sectors. In addition to promoting the development of entrepreneurial, digital, creative and technical skills through training programmes, the project aims to strengthen the framework conditions and the ecosystem of the cultural and creative industries.

Abigail Arunga is a writer, columnist, scriptwriter and author and has been in the writing industry for the last 13 years. She has previously worked on writing and copy for organizations such as the Bill and Melinda Gates Foundation, Girls’ Globe, Nomad Africa, Home and Living East Africa, and the Storymoja Career Encyclopaedia, among others. Find her work weekly in the Daily Nation.