He was a poet and a lawyer, theatre director and naturalist, politician and traveller – Johann Wolfgang von Goethe was an all-rounder and his interests varied greatly. His aim was always – to make the best of life.

To this day, experts like to describe Johann Wolfgang von Goethe as a universal genius. The diversity of his interests and passions, the abundance of his artistic works, his political and scientific work – all of this would normally be way too much for just one human life. Born in Frankfurt in 1749, he studied law and had already made a remarkable political career at the court of Weimar by the time he was 30. Not only did he become a confidante and advisor to the regent Duke Carl August, he was soon appointed as such to the position of privy councillor as well as to head of the mining, road construction and military sectors. As a court politician, he initiated numerous reforms, promoted the mining of silver and copper, campaigned for the renovation of roads and put the duchy’s finances in order. 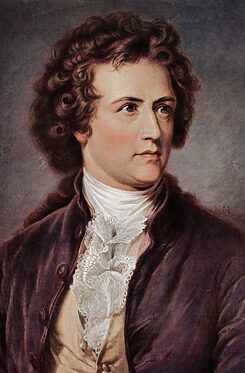 Even at a young age, Goethe had a remarkable political career. | Photo (detail): © picture alliance/ullstein bild/Gircke At that time, Goethe was what we today would call a bestselling author. His first novel Die Leiden des jungen Werther (The Sorrows of Young Werther) came out in 1774. He had completed the work within just a few weeks – as a kind of self-therapy, as he later confessed. “This composition”, he writes in his autobiography Dichtung und Wahrheit (Poetry and Truth), helped him to “save himself from a stormy element”. The epistolary novel, in which Goethe processed his own experiences as well as fictional elements in emotional language, moved readers all over Europe. Thousands of young men started to wear clothes similar to the ones Goethe had put on his main character, Werther, numerous lovesick people imitated the tragic hero and – desperate over an unrequited love – committed suicide. Even today, psychology speaks of the Werther effect, a media-induced suicide. Goethe hit a nerve, opened a “valve of feelings”, as media professor Holger Noltze calls it.

“Werther” was to be followed by numerous other publications: dramas such as Faust, which Goethe began in his teenage years at his home in Frankfurt, or Iphigenie auf Tauris (Iphigenie in Tauris), other novels such as Wilhelm Meisters Lehrjahre (Wilhelm Meister’s Apprenticeship), plus travelogues and poems. Goethe’s best-known lyric works include, for example, Über allen Wipfeln ist Ruh (O’er All the Hilltops is Quiet), An den Mond (To the Moon) and the Erlkönig (The Elf King).

A meeting place for the art scene

Goethe’s work came into being during the “Sturm und Drang” (Storm and Stress) period, an epoch that is characterised by a new concept of the genius – artists, according to the modern perception of those times, create from within themselves. They no longer imitate, but work autonomously and originally under a new freedom of development. Goethe’s companions were the poet, Johann Gottfried Herder, as well as the playwright, Friedrich Schiller, with whom Goethe – after initially viewing him with jealous eyes – soon became friends. The two men not only exchanged ideas, they also stimulated each other’s work, discussed a rejuvenation of the theatre and produced their own satirical verses together, the so-called Xenien -  the two writers found the literature business too mediocre, their contemporaries too bourgeois and so decided to get back at their guild in the form of malicious verses in ancient style.

This may have been a sign of an arrogant spirit, and in fact Goethe is said to have possessed such qualities as egoism, pride and a certain arrogance. Even Schiller described him at the beginning of their acquaintance as “an egoist to an unusual degree” (in a letter to his editor). Goethe, however, is also said to have been a sociable and valued person who cultivated correspondence and community. Artists, courtiers and scholars regularly attended the events he organised in his home, the Weimar Haus am Frauenplan, and he received fellow poets such as the young and, at the time, still unknown Heinrich Heine. Goethe is also known for his numerous female acquaintances and romances – he is said to have been platonically in love with Charlotte von Stein, and the Duchess Anna Amalia is said to have been a lady of his heart. Goethe lived with Christiane Vulpius from Weimar for 18 years before he married her in 1806. Their son August was already 17 years old at the time. 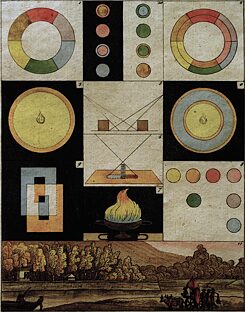 A graphic representation of Goethe’s theory of colors. | Photo (detail): © picture alliance/akg-images Goethe had many interests that went beyond politics and poetry. He was engaged in science, researching the human body at the Anatomical Institute of the University of Jena, for example, and discovered the seam on the human palate, the so-called intermaxillary bone. The creation of colours also fascinated him. Having developed his own colour theory, he tried to refute Newton’s Law (which he in fact failed to do). Out of a thirst for knowledge and a desire for adventure, Goethe also embarked on many journeys. His hikes and trips took him to the Harz mountains and the Rhine, Switzerland, Silesia, France and the Bohemian spas. A journey, he once wrote to Schiller, “revives, corrects, instructs and educates”. His trip to Italy is also legendary. Frustrated by his job as a civil servant in Weimar and thirsting for a boost in creativity, he set off for Italy in 1786, and later recorded his impressions in his report called the Italienische Reise (The Italian Journey).

When Goethe died in Weimar in 1832, he left behind dramas, volumes of poetry, short stories, novels, essays and treatises, travelogues, an autobiography, a book on colour theory. Quite a few biographers have worked on the life of Goethe to this day, have tried to trace his motivations and character from various sources, called him ambivalent, sometimes ascribed to him a too courtly attitude, sometimes emphasised his reformist spirit. Perhaps, however, the best way to describe this inquisitive and busy all-round talent is the way the biographer Rüdiger Safranski did in the subtitle of his book Goethe. Kunstwerk des Lebens (Goethe. Life as a Work of Art). He was inspired by Goethe’s aspirations and the way he made the best of life.