Diversity in the film industry
“We are all role models!”

The German-Turkish actor and comedian, Tan Caglar, sits in a wheelchair – and can be seen, among other things, in the TV series “In aller Freundschaft” (In all Friendship) (ARD / MDR). | Photo (detail): © MDR/Saxonia Media/Rudolf Wernicke

The actress, director and producer, Sheri Hagen, is committed to promoting more diversity in the German film industry. The question is, what has to change both in front of and behind the camera. 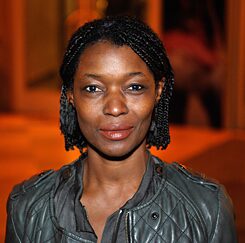 Sheri Hagen was born in Lagos (Nigeria) in 1968 and grew up in Hamburg. She can be seen as an actress in the cinema and on television, for example, in “The Lives of Others”, “Baal” or in the German crime thriller, “Tatort”. In 2015 she founded her production company "Equality Film”. After “At Second Glance” and “Blue Windows”, Hagen is currently working on her third feature film, “Billie”. | Photo (detail): © picture alliance/dpa/Roland Popp Ms. Hagen, this year the study “Diversity in Film” showed that discrimination is a major problem in the German film industry. The finding is the result of an online survey in which over 6,000 filmmakers from 440 professions took part from July to October 2020. Why did you take part in the action group that configured the content of the questionnaire?

I wanted to know how diverse we actually are in front of and behind the camera. Whether my perception of monotony was deceptive, or whether the numbers finally showed that our film and television landscape works with exclusions.

Was there anything about the results that surprised you?

The fact that 81 percent of women experience multiple forms of sexual harassment in their working context, and that more than 70 percent of people with an immigrant background see themselves as being portrayed in clichéd form. This confirms that content is only being directed at a specific audience.

Has anything changed since the study was published?

It has brought about a discourse in associations and film institutions, but the courage to take big steps and actually implement diversity in film is still lacking. A deconstruction of the film funding institutes is necessary. Productions must be financially strengthened in such a way that barrier-free access is possible. Film must be seen as an educational asset in order to reduce discrimination, it must provide role models for everyone and show people in their diversity.

What role has the issue of diversity played in film funding so far?

I’m not really sure whether Germany actually wants more diversity. The content hardly ever changes, and the number of diversely mixed teams is still very low. For example, I rarely see dark-skinned people in key positions or people with a disability. As long as nothing changes behind the camera and in the content, diversity in film will remain a utopia.

He made it from German film and television to Hollywood – actor Murali Perumal played in 2014 in “Big Game”. | Photo (detail): © picture alliance/Eventpress/Eventpress Radke In 2020 the Filmförderung Hamburg Schleswig-Holstein (The Hamburg Schleswig-Holstein Film Fund) introduced a diversity checklist. That led to the film project “Billie” being funded with a sum of 25,000 euros. How was your experience with the checklist?

I am very happy that this useful self-verification tool is now available. The checklist sparked debate and opened up new spaces – this led to new storytellers being given a chance. It’s just a shame that not many funding institutions followed suit. Many speak of more diversity, but still stick to old structures. A checklist only for the creative side is also not sufficient, we need something similar for the decision-makers of the broadcasting companies.

Critics of the checklist say it restricts artistic freedom.

I hear that over and over again. Just what exactly is meant by artistic freedom? Shouldn’t this supposed freedom of art inspire us not to cling to old power structures? I have to put up with this all the time – stories that conform to the system and are inconsistent with reality. The diversity checklist is an attempt to try something new. Diversity means more ways to tell a story, more complexity in the narrative, but also to reflect the reality of the teams working behind the camera – equal participation for everyone.

What meaning should diversity have in film?

Actually none. It should be a matter of course that we are all seen and heard. Our society is multi-layered and diverse, our reality is multi-layered and diverse, why should it not also be a matter of course in film and television and in the teams? As a child, I never saw myself depicted in German films or on television, and my children don’t see themselves depicted, either. I hope my grandchildren will of course be able to see themselves without the idea of them being exhibited, depicted simply on a human level, without any labelling of their background.

She has long been campaigning for more diversity in the film industry – the actress Maria Furtwängler in an interview in 2017 about gender representation in film and television. | Photo (detail): © picture alliance/dpa-Zentralbild/Martin Schutt The German film and television production company, UFA, also wants to reflect diversity in a better way. There was the #actoutinitiative, and NDR (North German Television) provided an “inclusion rider” in the contract for an episode of the German crime thriller “Tatort”. Which of these approaches do you think makes sense?

I think they are all right and absolutely essential. The imbalance is simply too great and so every initiative, every attempt, to make media makers aware that they have a social responsibility, is important.

What are your demands for the future of the German film industry?

I want a 50-50 quota on an intersectional basis. The adaptation of the British Film Institute’s diversity standards, mindfulness and intimacy trainers on the set and in productions as well as barrier-free films.

With regard to everyday racism, the director, Sarah Blaßkiewitz, says that the people affected point out the problems, but cannot offer solutions. How do you see it?

Much the same way. The organisations that represent the various non-privileged people are already offering solutions or measures. They are, however, not accepted, not even on a political level. Racist attacks all too often have no consequences. We all have a social responsibility, especially the decision-makers, not just the creative individuals. We are all role models!

She became known through the music channel VIVA, today she is a much-seen face in TV crime series and in the cinema, including the East Berlin comedy “Sonnenallee” (Sun Alley) – the actress Minh-Khai Phan-Thi. | Photo (detail): © picture alliance/Eventpress/Eventpress Fuhr

Ana Maria Michel is a freelance journalist for cultural topics and editor at the “Süddeutsche Zeitung” newspaper.