The feeling of collective ecstasy at a festival can’t be replaced by a digital format. | Photo (detail): © Rock am Ring

The culture of live acts and festivals has become increasingly important for the music industry, when income from record sales and streaming is barely sufficient for artists to survive. But how does open-air performance work – and what level of damage has it sustained as a result of COVID-19? An interview with music expert Frehn Hawel. 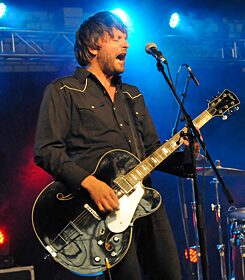 Frehn Hawel plays with the guitarist and keyboarder of Tocotronic, Rick McPhail. | Photo (detail): © picture-alliance/Jazzarchiv/Markus Lubitz Mr Hawel, you work for the concert agency Karsten Jahnke, where you’re responsible for the PR side of the Reeperbahnfestival in Hamburg. What kind of year was 2020 there? Was it a case of “putting your feet up” in the absence of activity, or was it especially stressful because the industry had to create its own opportunities?

2020 should definitely have looked completely different. We were on track to set new records with the festival sector here – because it was considered certain that the 2019 super-year would be exceeded in terms of success rate and event density. But when corona came along, we quickly realised how resourceful the industry is – we saw the first streamed shows, drive-in concerts or events that were at least possible with the audience sitting down and subject to certain rules. The fact that it was even possible to hold the Reeperbahnfestival subject to additional stipulations in autumn 2020 shows the level of passion and willingness – but also the ability to learn and adapt flexibly to new circumstances.

When there isn’t a corona pandemic happening, what sort of visitor numbers do Germany’s major festivals expect on average?

Rock Am Ring notches up 80,000 festival-goers, approximately the same applies for Hurricane. That’s a good description of the frame of reference.

Where does Germany fit in by comparison with European and international festivals?

It’s not in the same league as Glastonbury in England, where visitor numbers reach six figures. But the main feature of the German festival scene is its wide variety. As well as the big open-air festivals there are plenty of medium-sized and smaller events that make Germany a very interesting location. The Immergut or Haldern festivals are events that book very select acts – and the audience comes for that. The German market is just highly complex.

Do you think that streamed shows and drive-in concerts have flagged up alternatives for festival-goers that will be viable beyond the pandemic?

In my experience it’s been more about novelty value. At first everyone thought “it’s amazing that such things are possible!” but after a while it was obvious that interest was waning again. To quote the old saying, “You can’t beat the real thing”. People want to experience something together, and hear sounds at more than just a low volume. The physical element, the collective ecstasy – there’s no substitute for that.

A festival with a select booking – and the audience to match: for more than 20 years the Immergut Festival has been bringing indie, rock and pop to Neustrelitz in Mecklenburg-Vorpommern. | Photo (detail): © Nina Sartorius / immergutrocken e.V. An important aspect of the festival experience has always been the international character. What’s your prediction – will that return?

To envisage that, you need to look beyond the music scene. For instance, it was possible to hold a European football championship in 2021 – even if it did have consequences with regard to the pandemic. Travel is possible, with restrictions, people are flying again. In view of all that the festival culture will also return to its former proportions bit by bit, even if it does take a while for things to get completely back to normal. The trouble is, a festival doesn’t book the big international acts that actual summer, they are booked no later than the autumn of the previous year. Simply in terms of logistics, none of the big acts can afford to fly over to Europe just for two concerts. Especially not if the concerts might only have 20 per cent of the audience capacity because everyone has to sit. For this reason you can understand a certain caution from everyone involved, despite all the positive developments.

But to put it bluntly: wouldn’t it be a good thing if people were flying less to and because of festivals? Think about climate protection.

Awareness is increasing in this respect, it’s true. The problem is that you need to bring lots of stuff from one place to the next in the music touring business. They are still looking for concepts here. For example at our agency we represent artists from Scandinavia who donate money to forestation projects to offset the carbon footprint after a tour. But you have to appreciate that the commercial model for bands is that they go on concert tours. Most of them can’t make a living from CD sales or streaming income – which means that being on the road is a fundamental aspect of being a music artist.

But this logistical responsibility can’t lie solely with the performers?

No, if car rental firms were to switch to electric for larger vehicles as well, that would certainly be a step in the right direction. But of course it needs to be financially worthwhile for them too – many factors come into play here. So that question isn’t so easy to answer, but the industry will spend time trying to find answers over the next few years.

Has the pandemic caused irreversible damage or permanent changes?

The danger is that people get used to not being able to do certain things anymore. It wouldn’t have been a big deal to resume activities again after three months. But now the pandemic is in its second year. A new generation of teenagers would now be of just the right age to see their first concert or festival – but because of the lack of choice they are seeking alternatives. After all, you know from personal experience that if you hadn’t done certain things at a certain age, then they wouldn’t have become so important. I hope I’m mistaken, and that there will be more of a bounce-back effect. But there is definitely a risk that a new generation will fizzle out, that they will prefer to experience music in other ways – just not on a festival field.

Linus Volkmann is a music journalist and book author, he lives and works in Frankfurt.