From August to October 2020 the project Living Rooms offered a virtual exchange platform for artists and culture workers from Southeast Asia and Germany.

To support and network artists and cultural workers from their regions during the COVID-19 pandemic, the Goethe-Instituts from Indonesia, Malaysia, the Philippines, Thailand and Vietnam created a ZOOM Safe Space for virtual knowledge exchange and discussions on the current state of the arts (post-)corona. It was an attempt to reflect the complex and constantly evolving situation. This resulted in a diverse group that inspired, challenged and supported each other.

The six joint meetings were inspired by three key questions:

“COVID-19 is history and you will have a story to tell.”

In early March three artists travelled to Germany with a Pacific Leipzig scholarship from the Goethe-Institut for a residence of several months in the Leipzig International Arts Programme (LIAp). Two weeks 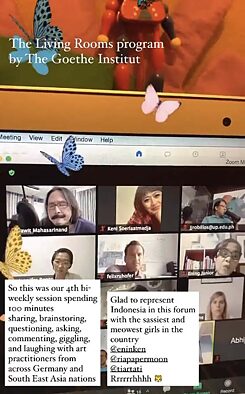 © Keni s. later the lockdown began and the three scholarship holders continued their stay despite contact restrictions but also because departure became increasingly less possible. Anna-Louise Rolland, founder of LIA, describes the creative process during this time as a kind of healing. The artists reflected their concerns, their loneliness and the desire for contact in their works, used their studio windows as exhibition space and developed strategies for exchange with other artists on site.

In Southeast Asia, artists and cultural organizations tried to adapt as quickly as possible to the new and uncertain situation. Three developments in particular were in the foreground. First, many artists joined forces to engage in joint social initiatives, for example producing masks or taking food packages to low-income neighborhoods. Also, cultural organizations developed virtual programs to support other artists or interactive formats to strengthen ties with others. Another phenomenon for Delan Robillos, a member of the National Commission for Culture and the Arts in the Philippines, was “Mainstream to Downstream”: to continue generating revenue, artists developed smaller formats or merchandise products that they primarily sold on social media platforms at lower prices and were thus able to enter new markets. For Artati Sirman, Selasar Sunaryo Art Space Bandung, the question was to what extent these new production modes could sustainably change and democratize the art market.

The longer the pandemic continues the more many participants of Living Rooms engage in digital technologies and develop new skills and formats. For Felix Ruhöfer, head of the art and exhibition 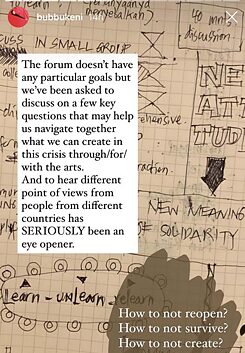 © Goethe-Institut Indonesien platform known as basis e.V., Frankfurt, the focus is on two aspects. First, the question of how digital presentation forms change artistic practices; and second, what effect virtual formats have on the audience. With its virtual puppet theater festival, Papermoon Theatre reached a larger audience than ever before. Another advantage: since the stage design did not have to be set up and dismantled for a tour, the theater makers could use fragile materials for this. For director Maria Tri Sulistyani, the interpersonal remains central, for which gaps and exchange formats must always be created. Komunitas Salihara in Jakarta also reaches more than 30,000 viewers with virtual performances. Numbers pose a new question about the temporary community that theater creates. Another novelty is lively chats and comments as direct reactions during the live videos. What kind of alternative social choreographies and gatherings are created?

New formats for further training and reflection are also possible. Independent dance creators without institutional structures have lacked stages in recent months. Instead, online dance classes for young people and competitions were in demand. The platform “dokumen.tari” by Sasikirana Dance Camp Bandung strengthens the mediation of contemporary dance with newly developed storytelling formats, photo essays and documentaries. In online workshops lasting several weeks, dancers from all over Indonesia explore their artistic practice and learn new skills to pass on dance visually and make it understandable. It’s about exploring new ways of communicating and letting the audience participate more in process and research.

The pandemic also brings issues of social justice to the forefront. Large sections of the population suffer from financial uncertainty. Artists, too, lack state support structures. Although many artists in Southeast Asia always work in “survival mode”, survival that depends on artistic work during the pandemic is hardly possible. The NGO Artist Welfare Project Inc. based in Manila offers independent artists access to affordable health insurance and has developed special support programs for artists stranded internationally or regionally due to COVID-19. The pandemic brings the vulnerability of the body, mental health and mutual attentiveness with others into focus.  Abhijan Toto, curator from Bangkok, sees the impulse of artists in Southeast Asia to take care of vulnerable groups, neighborhoods and communities in very different ways and thus create community through their artistic practice as an important development and shift in the regional art scene. But what exactly community means, who it includes and excludes, and which spaces it opens or makes inaccessible to others often needs to be defined more inclusively.
In the summer, Jan-Philipp Possmann, artistic director of the free theater “zeitraumexit” in Mannheim, imagined that all theaters, galleries and museums would have to be closed for years due to COVID-19. Homeless people would then move in, young people would use the stage to hang out, autonomous groups would rule there. What good reasons would there then be to return the rooms to art? A few years ago, the curator Liza Ho turned The Zhongshan Building, a former office building of the Selangor Zhongshan Association, into an art and creative quarter. After the end of the lockdown in Malaysia, she observed an increased interest in artistic, meaningful activities. People wanted new public spaces and not shopping malls.

In autumn, the second wave of the pandemic once again leads many countries in the region to a lockdown or partial lockdown. Quick adaptation is again required. For Hardesh Singh and his team from The Cooler Lumpur Festival, however, a purely virtual festival of ideas was not alternative.