The Goethe-Institut is known for promoting intercultural engagement by fostering dialogue through the Arts. This September and October the Institut aims to do just that in its 6 week Gender project Mindset Dialogues_ Questioning Gender Stereotypes through Art. 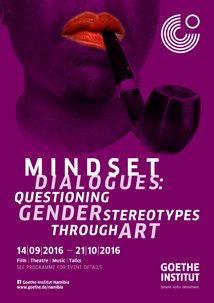 Goethe-Institut Namibia The six week series is an artistic-centred platform designed to question the various gender stereotypes. The aim is to emanate impulses, create dialogue and question gender binaries through various art mediums. The conversation will be created through theatre, film, music and panel discussions.

The Opening of the project will take place on the 14.09. at the Goethe-Institut Namibia at 19h15. The event will be opened with a Theatre Sports show followed by a short discussion about Gender stereotypes and how they lead to perceptions of gender roles. A brief introduction session with local NGO’s devoted to this cause will take place.

The weeks to follow we will screen three films, that portray people who live outside the norms. Stories of Our Lives (2014) is a Kenyan Drama that focuses on the lives of five vignettes that in one way or another lead into each other.  Mein Sohn Helen (2015) is a German Dramedy that focuses on the life of a young 17 year old boy and his journey as a transgender female.  The third film Freier Fall (2013) is a drama that tells the story of a police officer who lives with his pregnant girlfriend but falls in-love with his fellow police officer.

A theatre production Remote, Control. directed by Ashwyn Mberi will take place at the Theatre School of Namibia. The Play is set in Present day Africa and explores different aspects of gender equality, abuse and gender roles.
The Goethe-Institut will also host German female rapper Jennifer Gegenläufer and DJ Blasfematic to conduct a workshop and a concert to be held at the Warehouse Theatre.

Mindset Dialogues - all information about six week series taking place on the 14.09. at the Goethe-Institut Namibia at 19h15. 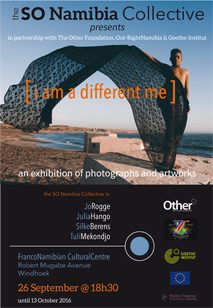 Exhibition Poster: Different me - an exhibition of photography and artworks