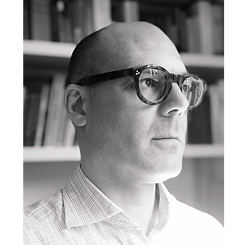 It isn’t a single image, but a whole cascade of images that encapsulate the current situation. I’ll pick three of them: For starters, there’s the surreal image of empty streets and squares in cities that are normally packed with tourists, which has given rise to a hopeful sigh of relief, a naive gratitude for this enforced break from the blind mad rush of everyday life. But that was soon eclipsed by the image of army truck convoys carrying the dead from Bergamo to cremation sites. And then there’s a very personal image: the WhatsApp icon on my smartphone that tells me whether there’s any news from my best friend, who’s fighting for dear life in the intensive care unit. This image shatters the surrealism and drives home to me how the crisis must feel to all those who’ve lost their jobs, whose livelihood is in jeopardy, who fear for their loved ones or are fighting for their own lives. This is the image that has hammered the merciless reality of this illness into my head for good.

Making long-term forecasts is always problematic, especially in such an unprecedented case as the corona crisis. But even at the risk of being completely wrong, here’s what I see in the offing: The corona crisis has put the globally networked economic system on hold, thereby exposing its vulnerability; it is forcing states into massive debt and back inside their nation-state boundaries; and last but not least, it is plunging people into uncertainty, threatening their livelihood and subjecting them to extreme psychological pressure. But the crisis also makes it clear that states and societies can counteract the crisis by taking resolute concerted action. Like any pivotal experience, it will ensure that things do not continue the way they were before.

It’s fair to assume that once the crisis is over, after a phase of bustling economic reconstruction and political cohesion, we’ll see an increase in political and social conflicts and – what wouldn’t be surprising – some far-reaching upheavals. For at least three reasons: Firstly, the burdens have got to be shared, especially the cost of billions in bailouts and lifelines accorded by governments around the world. And that won’t go off without a fight. Who has to pay, who doesn’t? In any case, those who so far have been able to evade their (tax) responsibilities on the cheap can hardly expect much forbearance in future. Secondly, our economic and healthcare systems will have to be reorganized to shore up resilience. What state can still afford to be unprepared for the next crisis and to remain dependent on imports of essential goods? This won’t be possible without debate either. How much is it worth it to a society to have a system that is prepared to deal with pandemics and other disasters? Third and last, the drastic measures with which states around the world are responding to the corona crisis make it clear how much is possible – in both the positive and negative sense. People are rigorously and unquestioningly complying with restrictions and government orders that were unthinkable just a short time ago, and they’re actually welcoming state surveillance. Aircraft are grounded and we suddenly have clean air. Quite unexpectedly, solidarity is now practised at both interpersonal and international levels, governments are distributing money to citizens with no strings attached, while (unstable) democracies are turning into dictatorships, and so on.

Hence the dawning awareness that many things that seemed inconceivable are perfectly possible after all. Which will lead, in turn, to more adamant political and social demands, more resolute calls for radical political and social alternatives, greater pressure for real change. Radical changes, including effective measures to ward off the looming evils of climate catastrophe, environmental destruction and social injustice, have been hitherto held up by claims that they are “unenforceable”, “too expensive”, “unreasonable”, “unrealistic”, but all these excuses have now been exposed as ridiculous.

In all likelihood, moreover, our newfound awareness of what is possible will continue to be framed by a certainty: it was the state that led us out of the crisis, not the market. That should put paid for some time to the neo-liberal dogma that has starved the healthcare systems in so many countries and thereby catalyzed the present crisis. The new age that lies ahead will bank on the state – hopefully with sound judgment and a good sense of proportion.

It is also to be hoped that this new awareness of what is possible will remain coupled with something else this crisis has produced: a new seriousness that has dispelled widespread political apathy and – in view of hardship and distress – changes the way people see politics. Perhaps this will ultimately enable us to see populists – the greatest threat so far – for what they really are: dangerous liars and total clowns.

Mankind has actually emerged wiser from some crises. There are three aspects of this particular crisis, moreover, that make it more likely we’ll learn something from it:

Michael Zichy is an Austrian philosopher. He studied philosophy at the University of Salzburg, where he graduated in 1997. His major fields of research are philosophical anthropology, where he is an expert in the theory of different understandings of the human being, and ethics. He is working in the field of philosophy of language, and he is interested in philosophical diagnoses of the present time.