Recycling for Education
An Environmentally Responsible Force in Nigeria

Climate change remains a global and existential problem. Humanity is slowly accepting that their actions on earth are a credible threat to the planet. To preserve the environment, organisations, like the African Cleanup Initiative in Lagos, Nigeria, are doing its quota to sensitize underserved communities, while helping to ensure their children stay in school.

Growing up with four siblings and parents in a tiny room that should house no more than two, Alex saw firsthand how their home changed with the weather. The Akhigbes were always ready to ‘weather’ the storms literally, by ensuring that important documents were kept in waterproof packages and on the highest surface. Every other thing was sorted too – heavy wooden and plastic belongings on the floor, smaller items on top and the mattress suspended to the best of their ability. The routine needed no drills. Every rainy night is a nightmare and no matter how they prepared, a few surprise rainfalls would cost them belongings every now and then.

The water was never clean. The flood brought with it all the debris from the blocked drainages and the waste they had earlier discarded in the rains farther down the streets. Ajegunle in Lagos is one of Nigeria’s low-income communities, and this was where Alex called home. More than two decades later, Alex is fighting to keep the environment clean of waste and recruiting an environment army by solving another big and more personal problems - keeping children in school. 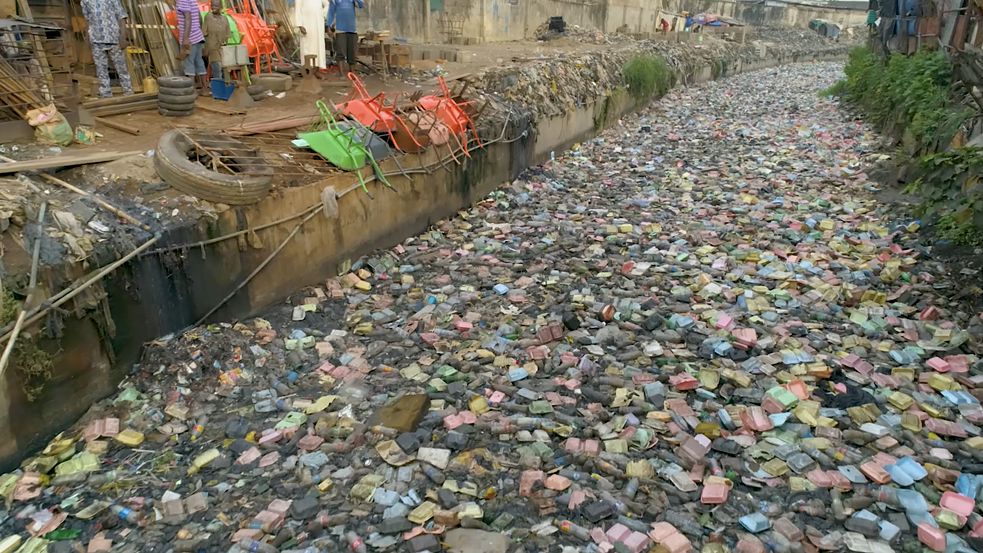 In Lagos, a city with about 20 million inhabitants, there are 13.000 tons of waste every day. | © Bunmi Amosu Lagos is Nigeria’s commercial hub and home to an estimated 15 to 20 million people. Daily waste generation from residential and commercial sources is put at 13,000 metric tons, and while about 7000 tons are officially collected and dumped by the Lagos State Waste Management Authority (LAWMA) into landfill sites, the other half is informally disposed. In spite of Private Sector Participation, waste management has remained largely poor and rural communities like Ajegunle are left to their creativity. Garbage gets indiscriminately disposed on the streets, sometimes burnt or dumped in the ocean, gutters, or rains thereby blocking drainages, sewers, choking aquatic life, harming soil nutrients and adversely impacting on the environment and human life.

In 2016, the government introduced the Cleaner Lagos Initiative with a mandate to, ‘deliver an innovative and sustainable waste management,’ this was truncated in 2019 with a change in government. Few months before then, Alex had successfully ran a pilot of Recycles Pay project in his childhood community: For eight years, he had worked with young volunteers to Clean Up communities in Ajegunle, Mushin, Amukoko and Surulere, all out of passion. But how did Recycles Pay come to be? 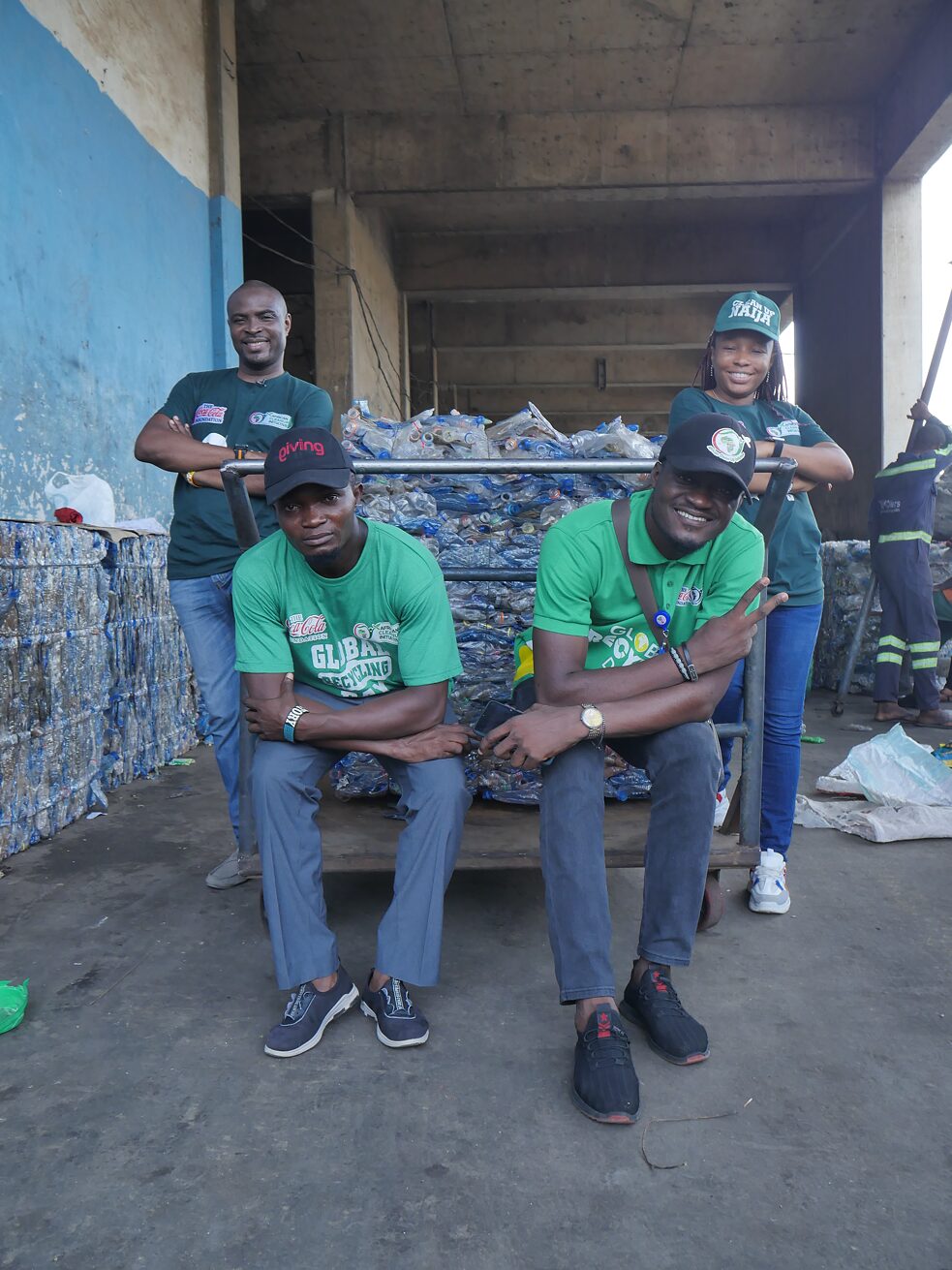 Alex works with his colleagues to create awareness to pollution and they already noticed a change in the people’s perception. | © Taiwo Oshaniwa To succeed, ACI had to spark interest in the parents with the idea at a meeting set up by the school. Recycles Pay allows parents to collect plastic waste from the environment in exchange for keeping their kids in school. There are currently 45 private schools – with about 2500 students – and 11 public schools on this project mostly in rural Lagos and neighbouring Ogun state. While students of public schools do not pay tuition, the schools (and some private schools) collect plastic waste to earn money that assist in buying teaching textbooks and board markers.

As the people arrive with full bags of plastics, the team of the African Cleanup Initiative weighs them to see, how much money they get. | © African Cleanup Initiative “Trust is important so the plastics are weighed at the point of submission to the school and the results logged. A kilogramme exchanges for 20 naira and the average school fees is about 5 to 10, 000 naira (US$12-25) per term. Parents are encouraged to bring in waste all year round to raise the needed school fees to keep their children in school.”

“With the programme, we’re able to pay part of the children’s school fees”

The 2019 Poverty and Inequality in Nigeria’ reports that 40% of Nigeria’s population live on less than 400 naira (circa $1) a day while minimum wage is 30,000 naira (under $75) a month for the ones with a means of income. A difficult economy means parents have to prioritize survival hence education easily becomes the opportunity cost. UNICEF puts one out of five out-of-school children in the world in Nigeria.

Elizabeth Farinmade is a young mother of three daughters and is thankful for the Recycles Pay initiative that has allowed her children to stay in school. 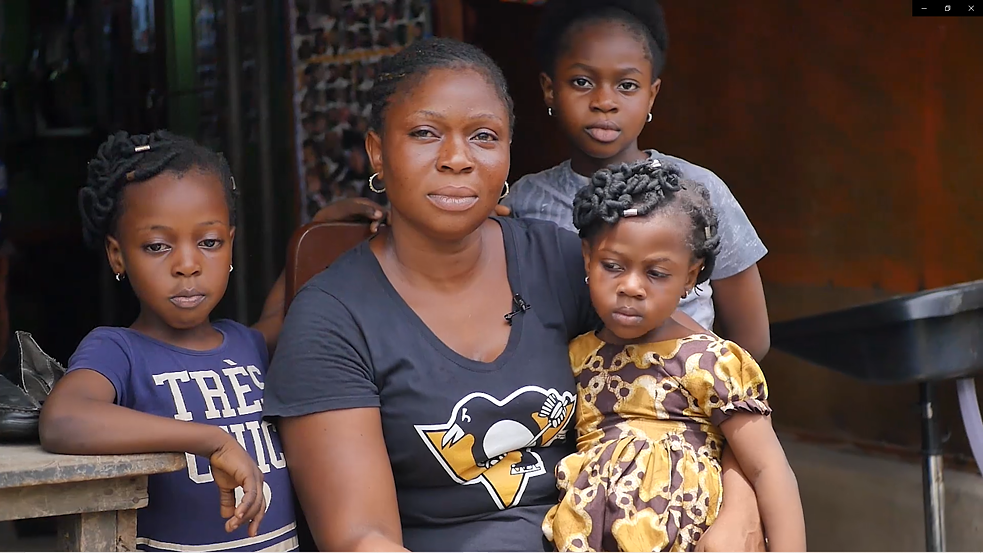 Elizabeth Farinmade collects bottles to pay the school fees for her children. It helps her a lot, she says. | © Taiwo Oshaniwa “I’m a hairdresser and the country has been very tough for my husband and I. In a month, we may not earn 20,000 naira. To augment our earnings, I sell petty things in my salon including drinks (soda and carbonated drinks). When customers leave the PET bottles behind after drinking, I pick them up and store. I also collect plastic bottles when I attend parties, or see kids playing football with it in the streets. I collect it from them before it ends up in the gutters clogging the drain. Some friends help me out, too (with bottles). With the Recycles Pay programme, we’re able to pay part of the children’s school fees in bottles.”


A Network of Recyclers all over the World

Anwojue Oluwaseun works as a counsellor with Africa Health Project under the supervision of Lagos University Teaching Hospital. She became environmentally conscious in 2019 when she would volunteer for cleanup exercises organized by ACI in her local community. Mushin is a congested residential area with poor sanitation and low-quality housing.

“I was introduced to Recycles Pay at a Parents’ meeting at my children’s primary school. At the time all three of them were enrolled but Zainab (the eldest) is now in secondary school. I have always liked a clean environment which is why I volunteer for cleanups. We pay our school fees in bits, mostly monthly. This initiative means that we no longer have to look for the full fees in cash.” 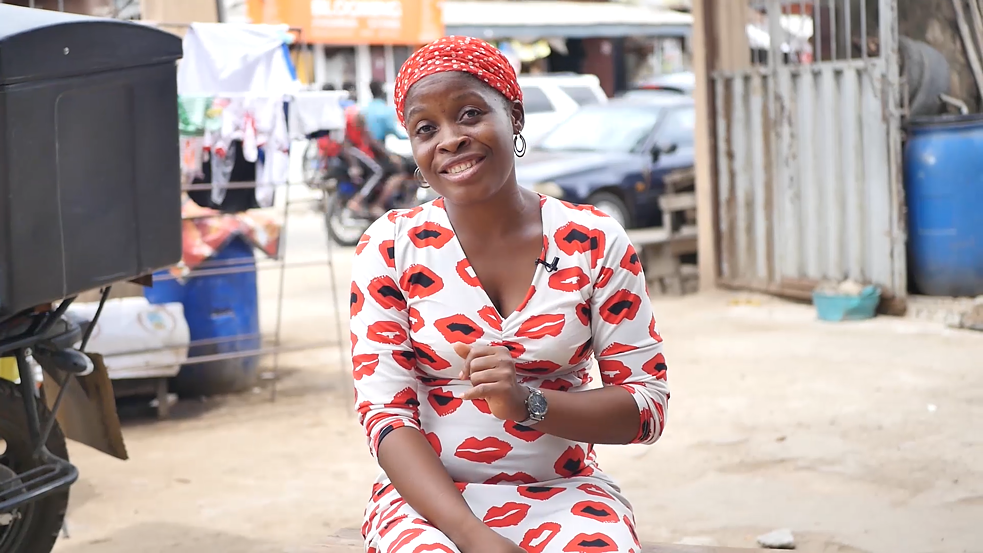 “I have always liked a clean environment which is why I volunteer for cleanups”, says Anwojue Oluwaseun. | © Taiwo Oshaniwa In spite of this success story, funding remains a major challenge for scaling this recycle model. “More than 100 schools have reached out to us within and outside the country but logistics and impact needs to be coordinated. In the beginning, our partners, Wecyclers, would help collect the bottles from participating schools but now we have three trucks courtesy of a one-year corporate sponsorship that elapsed recently. There is a network of recyclers all over the country ready to implement the model, but we need funds to build that capacity. “

In 2020 and despite the coronavirus pandemic, ACI collected 51 tons of plastic waste for recycling and intends to double that in 2021. Alex and his team hope to keep 10,000 students in school over the next four years while raising an environmentally responsible force in rural Nigeria.

Every person worldwide generates an average of 0.74 kilograms of waste per day. In the global North this is more, in the so-called global South significantly less. Those who contribute least to the catastrophic masses of waste - to e-waste or plastic swirls in the ocean - are affected the most: they lose their homes and in the worst case even their lives to landslides from landfills, they work under unsafe conditions collecting waste and suffer serious health consequences. According to the World Bank, the amount of global waste is expected to increase by around 70 percent by 2050 - if nothing changes by then. In our reports on the topic of "waste masses", the authors take a look at three approaches to reducing waste and discuss how recycling can become more profitable and safer.

Lolade Nwanze is a journalist from Lagos, Nigeria.