"Who's Who in the Yoruba Pantheon"

An Anthology about the most important Yoruba Deities

Nigeria is a country rich of manifold cultures. Its vast historical and religious heritage continues to be a basis for dynamic traditions. However, this cannot conceal that a wealth of knowledge, e.g. in the field of medicine, religion, education, architecture or crafts, has been lost over the past decades, due to the far-reaching effects of the slave trade and colonialism, the influence of new religions and lifestyles. As a consequence, local cosmologies are at times regarded as backward or even dubbed ‚satanic‘. This has led, especially among the young generation, to a loss of cultural memory which many Nigerians currently do.

In 2019, the idea was born to write a book for a mainly young Nigerian and international readership, focusing on the most important Yorùbá gods and goddesses, the òrìṣas, who had a huge impact on daily routines, rituals, the arts and leadership structures in the past. The book showcases 16 most important Yoruba gods and goddesses, the òrìṣas, featuring Ògún, Sàngó, Ọya, Ọbà, Ọbàtálá, Ọrúnmìlà, Èsù, Soponná, Olókun, Ajé, Aganjù, Ọsanyìn, Yemoja, Osun, Morèmi and Òsóosì. It aims mainly at a young Nigerian and international readership. Who's Who in the Yorùbá Pantheon wishes to inspire young people to learn about the spiritual and cultural significance of the sixteen òrìṣas that were selected by the Nigerian experts Prof. Wale Adeniran, Chief Priest Ifayemi Elebuibon, Oloye Muraina Oyelami, Oludamola Adebowale, Emma Uduma and Yinka Akanbi.

Each chapter is about one òrìṣa, beautifully illustrated by the well-known Nigerian illustrator Abdulkareem Baba Aminu, presenting the gods and goddesses as strong, beautiful characters with comic-style features.

Each chapter provides information about the origin, the characteristics, the symbols and the devotees of each individual òrìṣa and tells a story from their diverse lives – about love, jealousy, fights and shape-shifting. In their signature entertaining and educational way, Toni Kan, Peju Akande and Jahman Anikulapo dispel colonial preconceptions about local spirituality.

This book is realised by iwalewabooks, a publishing house for art and discourse, and by the Goethe-Institut Nigeria. 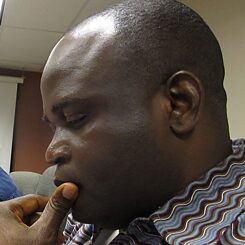 Jahman Anikulapo | © Jahman Anikulapo "Who's Who in the Yoruba Pantheon" is a significant contribution to the deepening of cultural understanding among the races of our collective humanity, in particular between Europe and Africa, which often appear far apart in terms of racial relationship. As father of a teenage African-German daughter, who is highly curious about African cultural and historical virtues, I appreciate the educational value of this publication, hence my gladness at contributing to the writing and production of the book. -- Jahman Anikulapo, author 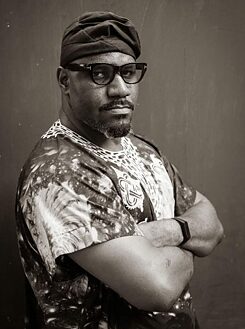 Toni Kan | Photo: Dirk Skiba The process of writing this book provided an insightful and educational excursion into Yoruba cosmology and culture. I thank Goethe-Institut Nigeria for making it happen - Toni Kan, author

I felt so honoured when I was asked to come on board the project because I've always had a keen interest in the Yoruba orishas from when I was young. Having grown up on a steady supply of Thor comics from Marvel, I scribbled drawings of Sango in stories I created as a child. Today, as an adult, having to create drawings of the Yoruba thunder god and the rest of the pantheon, means a lot to me. Most importantly, projects like this will present the orishas to a whole new generation of Nigerians and non-Nigerians, inspiring pride, restoring a sense of history and culture for the coming decades."– Abdulkareem Baba Aminu, illustrator 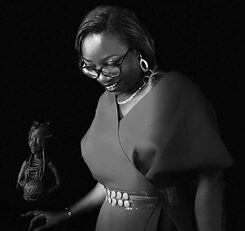 Peju Akande | Photo: Victor Ehikhamenor Working on this book, I learned a lot about my Yoruba culture. I am grateful to Goethe- Institute for the opportunity. - Peju Akande, author

The book is available in selected bookshops in Lagos and Abuja, internationally via iwalewabooks.com.