Two five-day workshops for children's book illustrators and authors, facilitated by Baba Aminu Abdulkareem and Ute Krause, took place in March 2019 and March 2020 respectively. Six authors and six illustrators, which were selected via an open call, participated and worked diligently to realize the workshops' aim: to develop affordable children's books for the Nigerian market, which tell imaginative, yet realistic, stories that reflect the country's social and cultural environment. 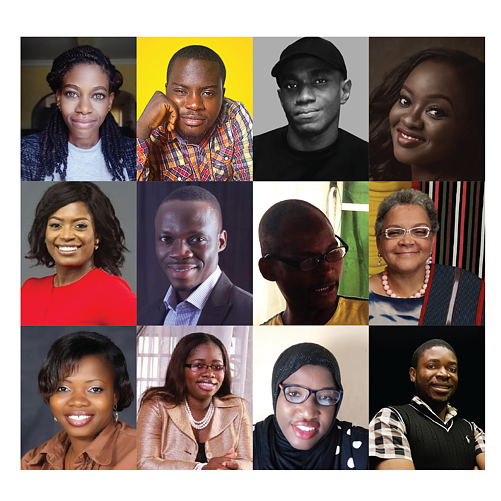 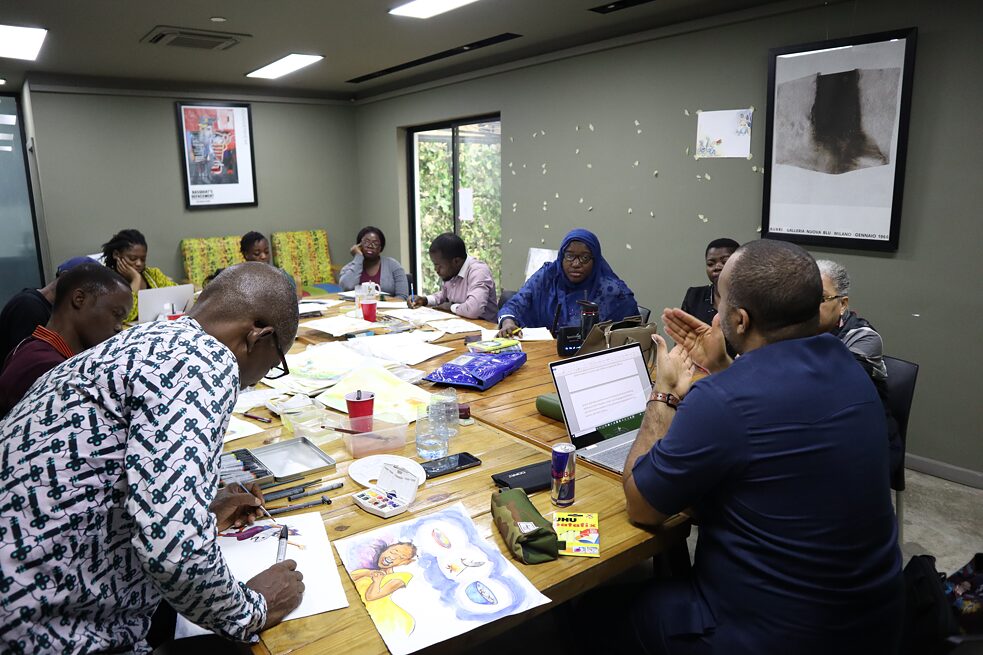 OUR AUTHORS
Aduke Gomez
Aduke utilises her legal and advisory skills to assist in business and creative development.  Commencing in legal practice with Udo Udoma & Belo-Osagie, she later worked for many years in various leadership roles within Ecobank Nigeria Ltd. Aduke was appointed to the Governor Fashola Administration of Lagos State as Senior Special Assistant/Secretary to the Lagos State Hotel Licensing Authority. She was also appointed to the Lagos History Committee and the Lagos Carnival Committee.
Aduke’s published collection of poems was featured as a festival book for both the Lagos Book and Art Festival 2017 and the Ake Festival 2017.

Bukola Ayinde
Bukola Ayinde is the Founder of Diary of a Special Needs Mum Initiative and P4:13 Foundation.
She holds a bachelor's degree in Law and a masters in Managerial Psychology. She started her career as a litigation lawyer before moving on to become a Learning and Development Consultant. She has published four storybooks on disability.

Funmi Ilori
Funmi Ilori, an educational psychologist, social entrepreneur and author is the founder of iRead Mobile Library Network, the first fully integrated ‘books on wheels’ for children in Nigeria, bridging literacy gaps, empowering teachers and enhancing quality education for the African child.
With Urban and Regional Planning as a first degree, Post Graduate Diploma in Education and Master’s degree in Educational Psychology, Funmi is passionate about education and the environment and she represents this as a green ambassador, teaching children and youths on Sustainable Development Goals.
Funmi is a 2015 Mandela Washington Fellow and her dream is to build the largest network of libraries for children across Africa.

Hadiza Muhammad
Hadiza Mohammad is the author of the Children Literature book “My Life as an almajiri,”.She has a bachelor of science in Microbiology at Ahmadu Bello University. She is a Medical Laboratory scientist and works with one of the hospitals under Federal Capital Territory Administration. Her short stories as appeared in two anthologies and in Brittle Paper, Praxis Magazine. She has a creative Non-fiction story in Saraba Magazine. She has been featured as a guest author from around the world in Anansesem-The Caribbean Children's  Literature Ezine. She likes reading folktales.
Sope Martins
Sope Martins spent her childhood reading. From her love of reading came a love of writing and, now, Sope Martins writes. She writes books, she writes for television, she writes radio dramas and she writes on post it notes. When Sope is not creating magical worlds with her stories, you can find her out and about in the bustling city of Lagos, where she has built a career in media.
One day, if Sope has her wish granted, you might just find her in a book!
Ugochinyelu Anidi
I am a children’s literature enthusiast. I read and write books for children, especially picture books and chapter books. My blog, Pint-sized Bookworms features reviews of books for children and other kidslit related news.
I am a member of the Society of Children’s Book Writers and Illustrators (SCBWI), Long Island Chapter. I am a lover of words, so besides reading children’s books, I play mean a game of scrabble and I am a lecturer of law at the University of Nigeria. I live in Lagos, Nigeria with my husband, three sons and my library of over 300 children’s books. 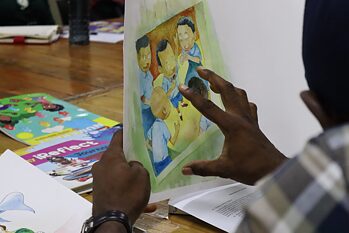 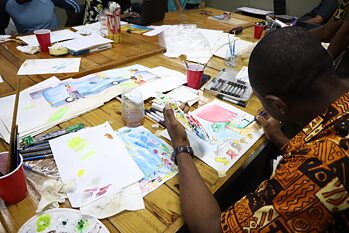 © Goethe-Institut / Opeyemi Balogun
OUR ILLUSTRATORS
Baba Aminu Mustafa
Since I was a child I have always loved stories and art, I learnt spelling and sentence construction from reading comic. At 8 years old I vowed to learn how these stories are transformed from words to visual, and how to create them.
Fast forward to adulthood, I am still that 8 year old trying to keep to his promise, which lead me to be a digital illustrator/animator. I have produced various digital art works, from portrait, comic, coffee books, magazine and children books. I am ever learning and open to new ideas. The sky is just the starting point.

Edwin Irabor
Edwin Irabor is a creative and versatile artist, very invested in visual storytelling especially in the areas of illustrations, Architecture, filmmaking and 3D animation.
He is skilled in generation of ideas and developing them into expressive pictorial, audio-visual and graphical tools for visual communication. He has worked on comics, storyboards, concept art, and digital paintings and is capable of working in different styles and media, digital and traditional.
He has handled the illustration of Children activity books for the past 7 years and also illustrated 4 books for “African Storybooks”, an affiliate of SAIDE.
Folasade Adeshida
Folasade Adeshida is a self-taught graphic designer and illustrator living and working in Lagos. She has worked in character design for animation, creative design for advertising and illustrating for children's book and comic books. She grew up on a steady diet of fantasy books and “Redwall” and seeks to recreate for African children the same sense of wonder and imagination those books sparked in her. To make this possible she has also collaborated with Flipleaves to bring free African stories to African Children. When she is not Illustrating, designing or fighting dragons she plays mother to her cat Odin.
Francis Umendu Odupute
Francis Umendu Odupute is an artist cum international award-winning journalist working fulltime with The NIGERIAN OBSERVER Newspapers in Benin City, Nigeria. He received his tertiary education/professional trainings (B.A degrees in Painting, and MFA in Painting, from the University of Benin (UNIBEN), Benin City; and (post graduate diploma in journalism, from the International Institute of journalism (IIJ), Abuja. On 4th December, 2009, ODUPUTE won the Global Media Award for Excellence in Population Reporting (Editorial Cartoon category) in Washington, D.C., USA: https://www.populationinstitute.org/external/files/2009_Program_Booklet.pdf ; on August 31, 2012, ODUPUTE won the WASH Media Awards 2012 (Cartoon/photo category) in Stockholm, Sweden: http://saharareporters.com/node/14529/de..; https://www.15min.lt/video/meet-the-winners-of-the-wash-media-awards-86682
Olanrewaju Gafar
Olanrewaju Gafar is a graduate of Yaba College of Technology in Graphic Design.  He is an illustrator, painter and art director. He has created many pieces of illustrations for children’s books, comics and storyboards for television commercials. He has spent a lot of time working in advertising but one thing keeps striking him about drawing because he believes that it is the bedrock of creativity. With his uncanny imagination for illustrations, drawing keeps him going.
Henry Ezeokeke
Henry Ezeokeke is a freelance Illustrator and cartoonist based in Lagos. I studied art at The Yaba College of Technology Lagos, Nigeria. I have worked in advertising and publishing. My hobbies include reading, drawing and watching cartoons. I 'am a versatile illustrator capable of adapting to various artistic styles, depending on the needs of a project. I create illustrations for children's storybooks, TVC Storyboards, concept art and character design. I can work on any project large or small considering the clients budget. I have a disciplined work ethic and a penchant for producing high quality work. 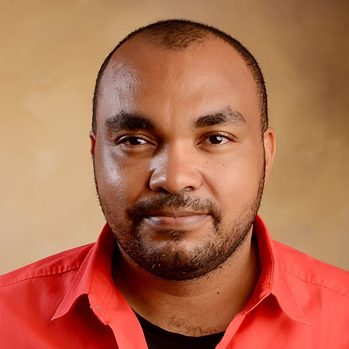 Abdulkareem Baba Aminu is an award-winning cartoonist and illustrator who has created work for numerous book publishers, Nigerian and foreign. Also a journalist, he is the Editor of Daily Trust Saturday, one of the most influential newspapers in Nigeria, where his popular editorial cartoon strip 'Back-Hand' appears weekly. 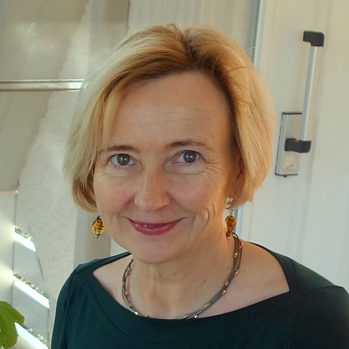 Ute Krause was born in Berlin but grew up in many countries, including Turkey, Nigeria, India, and the United States as well as Germany. She is the author of more than sixty children’s books published in Germany and throughout the world.

Children’s books shape the world view we grow up with. It is important for children to be able to recognize themselves in stories, illustrations and narratives and, at the same time, to learn about the different realities of life around them. Does children’s literature in Germany, Finland and other (Northern) European countries today reflect the increasingly diverse societies in which we live, or does it make a growing proportion of its young population invisible?